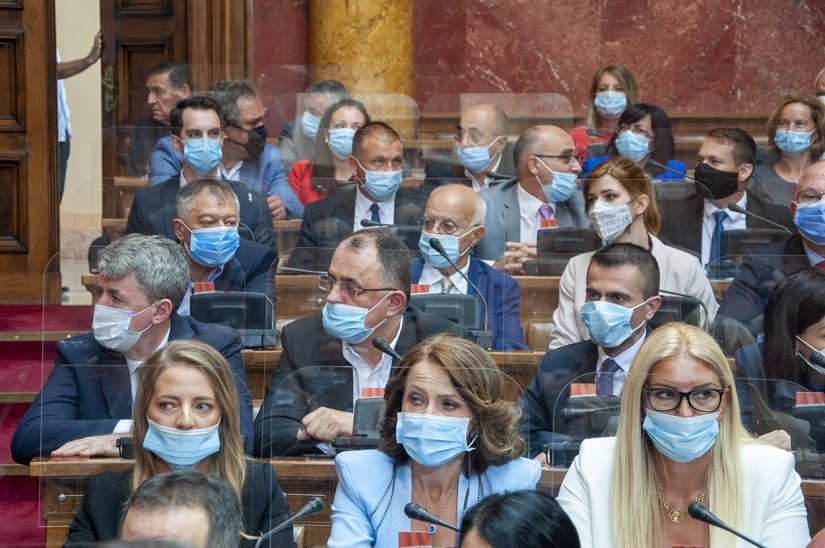 Exactly how much did the vaccines cost? Or respirators? How did we decide on a contractor for the construction of the long-awaited Belgrade tube? Is the top of the government really connected with criminal fan groups? Who eavesdropped on the President of the state, and if no one, why have you been claiming for months that someone did? What will back-to-school be like in autumn? Where is the main bus station in Belgrade? Do we plan to negotiate with Kosovo for another 20 years without progress? Can we find money for the treatment of children so that citizens do not send SMS? The MPs could have asked all these answers from the representatives of the executive every last Thursday of the month. But they did not.

At the three-hour sitting, MPs can get an answer from the Prime Minister or ministers, live and immediately. And not only that. Afterwards, they have extra time to ask additional questions and in the end, give a final comment. In that way, as required by law, the National Assembly would exercise its oversight role of the executive, and MPs could “examine” those elected.

Instead, in the latest parliamentary convocation, parliamentary questions are not really questions, but rather a cue for ministers to brag without hesitation about their wise moves. Topics relating to successful economics, construction of infrastructure, international successes of the President, successful vaccination are brought up. Even if something specific from the local environment were mentioned, one would conclude that major issues are illegal landfills, construction of roads or modernisation of the railway. However, when the answers are heard, one gets the impression that it has all been agreed, as it happens that the ministry has just started some work in connection with the topic that the MP is asking about. In the rare cases when one of the seven opposition MPs asked for an explanation – they received an answer filled with attacks, insults and even humiliation.

It is good that they keep coming

It is commendable that the sittings at which the MPS’ questions are answered are organised every month, while earlier (when there was opposition) it was often avoided. For example, while the current President of Serbia, Aleksandar Vučić was the Prime Minister, MPs asked questions in May and July 2014, in July 2015 and October 2016, and the next time only in October 2017, when Ana Brnabić was already the head of the Government. It usually happened that the session ended on Wednesday or Thursday morning, and when there is no session – there are no parliamentary questions. Now, on the contrary, the Speaker of the Assembly announces in advance that the vote would take place on Thursday night, in order to enable MPs to ask questions. And members of the government are happy to come. Maybe because they have unlimited time to answer questions posed only by their party or coalition comrades. It is also good that statistically the illusion is created that the Assembly controls the Government, so this is something that cannot be skipped in various reports.

Just as politicians regularly and often appear on television, where journalists ask them pre-agreed questions and do not interrupt them while answering, so they like to come to the almost one-party Assembly. The Prime Minister Brnabić and Ministers Aleksandar Vulin and Zlatibor Lončar have a unique opportunity to go on about what they planned, regardless of the topic.

For example, at the last sitting, the independent MP Vladan Glišić asked about the closure of the Geox factory and in general about (in his opinion) the excessive reliance of the economy on the European Union. The Prime Minister replied that everything was “wrong” and gave him a long lecture on the successes of the Serbian economy and foreign investors who are simply racing to come to Serbia first. Only at the end of her speech did she say that “we will not leave the Geox workers in the lurch. We will be there and we will find them better jobs.” (Source: Shorthand notes). No reason was given for the withdrawal of the investor, no explanation how much it all cost, who will find a better job for the workers and whether jobs will be found for all 1200 workers. The MP did not even insist on that, but continued to fulfil his agenda with a story about Kosovo and attitudes against the EU.

Next, the MP from the Justice and Reconciliation Party, Samir Tandir, spent most of his time thanking the Prime Minister for visiting his city, and enumerating everything that was marvellously done and promised there. And then came the question addressed to the Prime Minister and the Minister of Police: “Are you satisfied with the results of the fight against organised crime and corruption?”

So if they were not feeling comfortable enough, the MP additionally praised them for starting the “mafia strike”. It was an opportunity for Minister Vulin to attack opposition politicians with all his might, to quote certain media, to accuse them all of working to incriminate Aleksandar Vučić’s family and to present his theories proving that there is no connection between the Government and criminal clans. Of course, the Prime Minister used the opportunity to talk about the arrest of Veljko Belivuk’s clan, about the details of their crimes, repeated everything that Vulin had said and added: “Personally, I really want to give all the support and courage to Aleksandar Vučić and Aleksandar Vulin, who was brutally attacked just because he does his job responsibly, and properly. Together with Aleksandar Vučić, he was the first to put his and his family’s life on the line.”

This is how almost half of the time provided for the sitting was spent. Among other issues, we single out the request to increase the number of police officers in Novi Pazar, and the allegations that opposition leader Dragan Đilas was reported for domestic violence a few years ago. The MPs asked the Minister for European Integration about the funds from which Serbia should receive grants, and the MP (from the party headed by the Minister) asked the Minister of Village Care to hear very detailed plans for investments in rural households. The Minister of Culture was asked for information on celebrating important dates, and the Minister of Education for information on plans for investment in education.

And just like that, at every sitting, the history is repeating – the Minister of Defence is asked about weapons that will be procured and the Minister of Health about the fight against Covid-19. Ministers are satisfied with questions, MPs with answers. In this convocation, there is even an agreement that MPs should keep their questions short so that all the parliamentary groups can take their turn.

Since the questions are always asked in the same order, from the smallest to the largest parliamentary group, and since there are several small parliamentary groups from the ruling coalition in the Assembly, surprises are impossible. If, after the next elections, an opposition party enters the parliamentary benches, the custom of spending all the time on answers to regime MPs can easily be restored, so that opposition MPs never take their turn to ask. According to the Rules of Procedure, members of the Government have unlimited time to respond, so no rules have been violated.

(The text was written in cooperation with the ‘Open Parliament’ initiative)