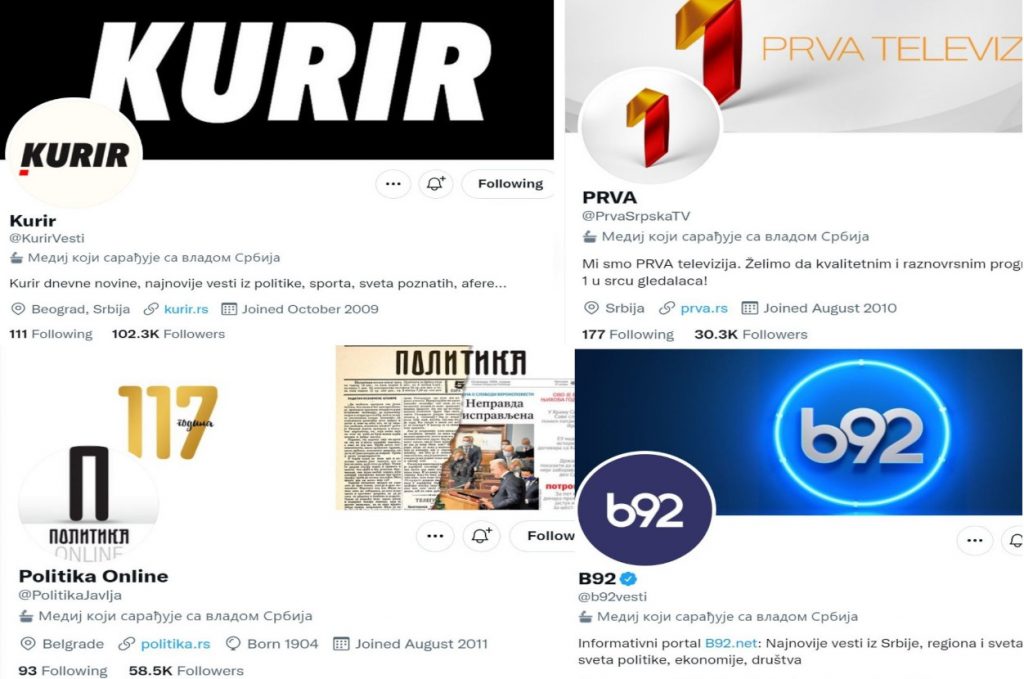 Twitter about labelling of the Serbian media: It is important to know who controls and exercises pressure on media

After deleting more than 8,500 accounts last year which promoted Aleksandar Vucic and Serbian Progressive Party, Twitter gave them another headache by labelling a few of media as the media controlled by the Government of Serbia. In response to the Serbian authorities’ accusations that it was censorship, this company replied to Istinomer that it was important for Twitter users to know when the state exercises control over editorial content through financial resources, explaining what their guidelines when making such distinctions were.

It has been a long time since Serbian media scene was disturbed as greatly as after Twitter decision to label the accounts of the majority of media as “Serbian Government affiliated media”. This social media used this label several days ago to label public broadcaster RTS, regional public broadcaster Radio Television Vojvodina, Politika daily, news agency Tanjug, online media outlet B92, TV Prva, TV Pink, TV Hepi, tabloids Kurir and Informer. While some believe that Twitter only confirmed what we all knew and what was visible in media monitoring of local non-governmental organizations, the government and labelled media accused this media of censorship, attack on media freedom and even being “a propaganda war machine”.

Istinomer addressed company Twitter in order to learn what were the criteria and methodology for labelling “state-affiliated media”. This company press office responded that they make a difference between media financed from public funds and those controlled by government or state, since their “focus is to label state-controlled media which are not free from political and government pressures”.

As it was mentioned, the media affiliated with the state are defined as the media where “the state exercises control over editorial content through financial resources and direct or indirect political pressures, and/or control over production and distribution”.

“We believe it is important for people using Twitter to know when media are controlled by the government as regards financing and editorial content. This control is exercised either through self-censorship or by announcing information under government directive. We will not publish the list of all accounts which are labelled as state-affiliated, to prevent the states that want to avoid this labelling to open new accounts in order to trick the system”.

The company told us they had consulted “many stakeholders, including academics and researchers, government, expert organizations and those using their services”, and that, in their opinion, such labelling of accounts was “efficient since it provides context and information to the users on the origin of account and its potential intent”.

Although they have not specifically listed applied methodology, their website mentioned that in order to label the media as state-controlled, they will use the reports of numerous expert organizations as their sources, such as Media Freedom Index of Reporters without Borders and Freedom House. Just to recall, in their final report, the Reporters without Borders mentioned that “Serbia is a country with weak institutions that is prey to fake news spread by government-backed media”, while Freedom House criticises Serbia for “pro-government propaganda, which contributed to the SNS’s sweeping election victory”.

Although he deems it good that Twitter is dealing with Serbia in more detail than to just “let us be at mercy of algorithms”, director of Share Foundation Danilo Krivokapic believed that it was of utmost importance for this platform to announce what was the reasoning behind their decision. He believes this is not “classic censorship”, since although Twitter will not recommend or enhance their accounts or tweets, the mentioned media will be able to publish content without disturbance, and their followers will have full access to tweets.

“Twitter, and other platforms too, have been justifying for too long that they are nothing more than intermediaries in informing, without any liability for it, but numerous side pressure have caused them to change their practice and have more responsibility for their users. At the beginning of this year Twitter blocked the then American President Trump, and Facebook has, along with its partnership organisations, started labelling fake news more seriously so I believe this Twitter decision came from that. It is reasonable in that sense to first label the media that depend of government, since such influence is the most obvious and prevalent, but we have to have all information on how such decisions were made so we could have confidence in such system”, Krivokapic said for Istinomer.

Although they have used the same censorship narrative, the leading Russian and Chinese media that were labelled by Twitter as government-affiliated media, such as RTS, stopped using that social media as a sign of protest.

To make the situation even more dramatic, President Vucic said that he could wait for Twitter to shut down his account and make him another Trump, which was reported by many global media. These include famous Washington Post, which in the first sentence, describes him as “Serbian autocratic leader”.

Playing naïve, President Vucic asked what was wrong that some media had cooperated with the government. He even congratulated to the media “opposing the obedient network”, saying that Twitter really commended those media, since they did not opt to cooperate with “tycoons, thieves and criminals”. In his words, the government was not paying the majority of those media, “while they are paying Voice of America and BBC, but they have not listed them as government-affiliated media”.

Ministry of Culture and Information announced that this “multilingual website” (?!) came a long way from exchange of opinions and freedom of speech to censorship in some media in our country.

Serbian Broadcasting Company – RTS also used the financing argument, and in its longish press release emphasised that Twitters users had not been warned that Voice of America, Radio Free Europe and Deutsche Welle were completely financed from the state budget as the state was their founder, while Serbian Broadcasting Company was labelled as “affiliated” although it was not financed from the state budget. As far as other criteria had been concerned, as mentioned in the press release, by analysing the content RTS had published on this media, the computer algorithm could not have established that content was made under pressure or influence of government in Serbia. RTS therefore estimated that such Twitter decision was “unfounded and political”, so it stopped publishing its content on this social media.