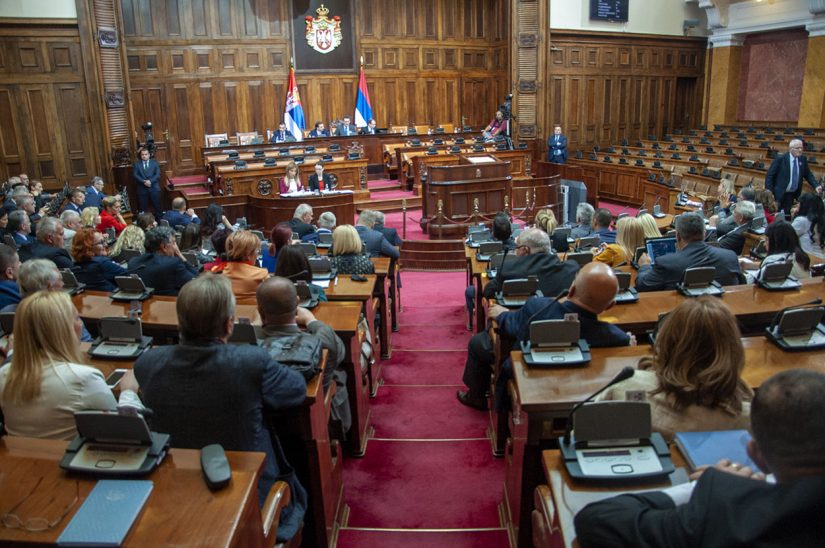 How can an MP know about the worth of two billion euros anyway?

In the course of one year’s work, the current parliamentary convocation has confirmed 26 agreements on loans debiting the state for over two billion and 200 million euros. This piece of information is not in itself relevant, especially knowing that loans are always voted for along with some other, seemingly more important laws and that there are no long discussions related to them. If there is a discussion regarding loans, there seems to be a rule that everyone follows – if you want to hide data, present long series of numbers and no one will understand anything.

How can an average citizen, or even an MP, understand whether the current parliamentary convocation has debited us for a lot or little? How much do the public know about such loans anyway?

Here is an illustration of the worth of two billion euros: Aleksandar Vučić, the President of Serbia, has recently announced that the new Covid hospital in Novi Sad, along with the surrounding infrastructural works, will cost a little less than 28 million euros. The vaccine factory will cost less than the hospital. The projected investment in the children’s hospital ‘Tiršova 2’ is worth 110 million euros. Speaking of large numbers, the construction of two Belgrade underground lines (that has been anticipated for decades and cannot seem to start) requires the investment of six billion euros. We take a loan of two billion euros every year, but the money is used for something else.

Why does an economic tiger need such big loans?

Yes, we know that all states take loans, we know that citizens also live on loans, but we also know that if you take loans for the house and the car at the same time, this means that you must have a very high salary. Since we hear daily from the state authorities that Serbia is ‘an economic tiger’ and that ‘things have never been better’, we are starting to wonder what are the projects that the state has funds for and what are the projects that the state is taking loans for. In order to make things somewhat clearer, we have tried to classify all state loans into four groups: ecology, Covid-19, infrastructure
and public company debts. We have also analysed how much and in what way these loans have been discussed in the Parliament and whether MPs have made any effort to understand what they were voting for.

A bit less for Covid than for the entire infrastructure

The state has taken loans of over 520 million euros for remote heating systems, the projects of energetic efficiency, the so-called ‘green recovery’ and the cleansing of wastewater. Loans of 867 million euros have been granted for the road construction, railway reconstruction, the renovation of river corridors and the gasification of some cities.

However, four loans intended for the urgent response to the Covid epidemic are worth about 600 million euros and they should be used to facilitate the public sector, the small and medium enterprises. It is not a lot when we know that 237 million euros were allocated for the debts of only three (privileged) public companies – 28 million euros for the ski resorts, 40 million euros for ‘Elektromreža Srbije’ and everything else for Srbijagas.

Lest we forget what we are building

As a reminder, in November 2020, the Parliament allowed in one day loans for the rehabilitation of the remote heating system in Serbia, for the project of energetic efficiency in public facilities (phase II), for the same project in the facilities of the central authorities and for the water supply and the wastewater cleansing facilities.

We cannot analyse everything so we shall take two random samples. In December, the Parliament adopted the Law on Debiting of the Republic of Serbia in order to enable financing of the project Ruma-Šabac-Loznica. This is not a mistake; this is the actual title of the law. What project? In the parliamentary discussion, Marija Obradović, the Minister of Public Administration and Local Self-Government, explained that the project was related to the construction of an important road which will connect 600.000 people (the source: shorthand notes, 22nd December 2020). During the discussion, the MPs of the ruling coalition (at least seven of them who discussed this topic) kept repeating her explanation about connecting people, following the pattern: ‘By investing in capital projects, we wish to achieve faster growth and development of our economy’.

Besides the importance of the project, they also discussed interest rates which ‘have never been more favourable’ and which are, by all means, lower than during the times when ‘tycoons and thieves’ were in power, and which are, naturally, low not because of the global situation, but because Aleksandar Vučić has carried out the reform of the Serbian economy successfully. They added that, by taking favourable loans, the state was actually decreasing the debt. As a second example, we will take the parliamentary discussion where guarantees were given to the company Srbijagas (the source: shorthand notes, 9th June 2021).

We take loans because we are doing great, and we will continue to do so

During this parliamentary convocation, not a single criticism was heard regarding the loans. There were no formal questions about the prices of projects, the deadlines for finalisation and previous unfinished businesses. Nobody asked for the explanation on what grounds it was concluded that the loans were favourable. Nobody expressed any concern, only beliefs that Serbia was economically growing stronger.

Finally, regardless of ‘steel friendships’ with China and Russia which are daily promoted by authorities, Serbia has taken most of the loans from the International Bank for Reconstruction and Development, the German Development Bank and the Council of Europe Development Bank. Recently, new loans have been proposed – 32 million euros for the project of student housing and 78.200.000 euros for the development of the Sava and the Drina corridors, so we should expect new loans this autumn. Thus, Serbia will carry on with the trend from the previous two years when it took loans of two billion euros a year through interstate agreements.

(The text was written in cooperation with the ‘Open Parliament’ initiative)