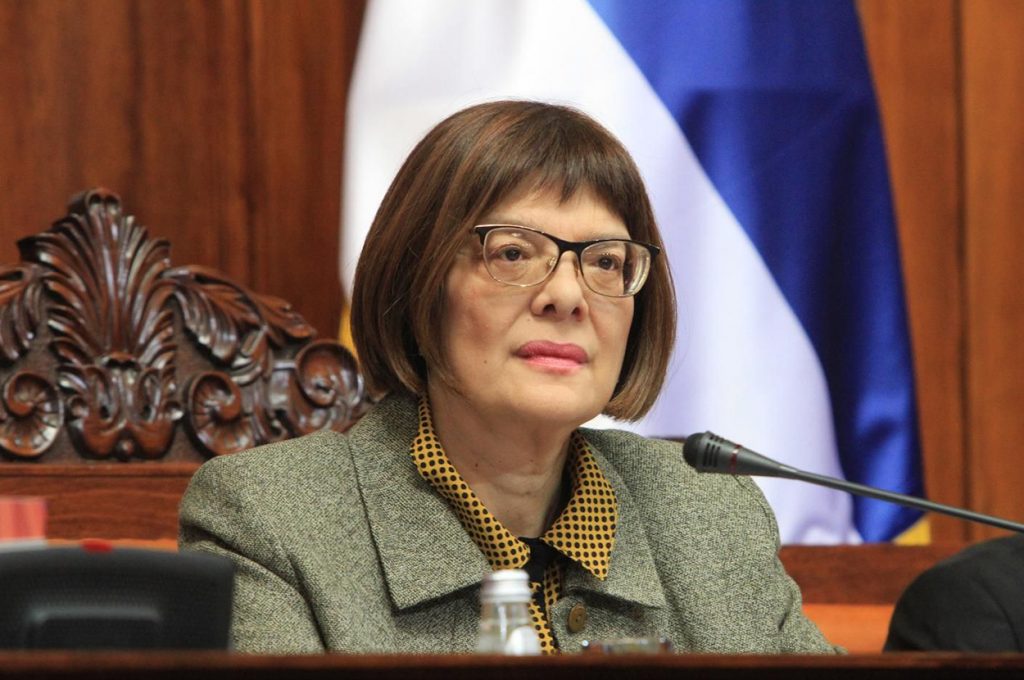 Occupation: Speaker of the National Assembly
Education: Bachelor of Laws
Party: Serbian Progressive Party
Function within the Party: Member of the Presidency
Place: Novi Sad
Date of birth: 22 May 1963

Graduated from Faculty of Law of the University of Novi Sad, and passed her bar exam in 1989. She became a lawyer at 24, and she is a daughter of Mita Gojkovic, a famous lawyer from Novi Sad.

She was a mayor of Novi Sad from 2004 until 2008 as the first woman in history of Novi Sad at this position. That is the moment she is proud the most.

She was a councillor in Novi Sad City Assembly 2008-2012, and since 1992 she was an MP in parliaments of both Yugoslavia and the State Union of Serbia and Montenegro. During one of these mandates she was a Vice President of the Chamber of Citizens. She participated in the work of the Inter-Parliamentary Union.

During one of her mandates she was a councillor in the Assembly of the Autonomous Province of Vojvodina.

In the first parliamentary elections she was a member of National Radical Party of Veljko Guberina, but that party had afterwards merged into Serbian Radical Party. Maja Gojkovic started splitting with the top of SRS in 2004 already, when she, as the candidate of the Radical Party, was elected to be a mayor of Novi Sad, and then in March 2008 as Novi Sad SRS Board announced that Maja Gojkovic is not the member of the party anymore.

After the splitting in SRS when her former party colleagues Tomislav Nikolic and Aleksandar Vucic separated into the Serbian Progressive Party, it was speculated that she would join them. Her response to that was to establish new party – People’s Party. She mentioned that Vucic himself invited her to join the Progressive Party, but her Group of Citizens “Maja Gojkovic” concluded that it would be better to form a new party. So they formed the People’s Party, which has signed a declaration on the common political action with the Democratic Party of Serbia (DSS) and New Serbia (NS) by the end of 2008.

From Mladjan Dinkic Union of the Regions of Serbia (URS) to whom the People’s Party joined, she announced “grand comeback to Serbian politics”. At the elections in May 2012 she ran at the URS list, but in June her party was already excluded from the membership since it was negotiating with DS on forming Government of Serbia without other URS members’ awareness. In addition, she supported the Government of Serbia formed by SNS-SPS-URS.

At the beginning of December 2012, although she notified the public that the People’s Party, she had founded and chaired, would collectively join SNS, but that did not happen. Namely, Maja Gojkovic became a member of SNS Presidency, but the People’s Party that entered the Parliament through URS list continued receiving the funds from the budget.

She was elected the Speaker of National Assembly on 23 April 2014. She was re-elected to that function on 6 June 2016.

She says that she speaks both English and German.