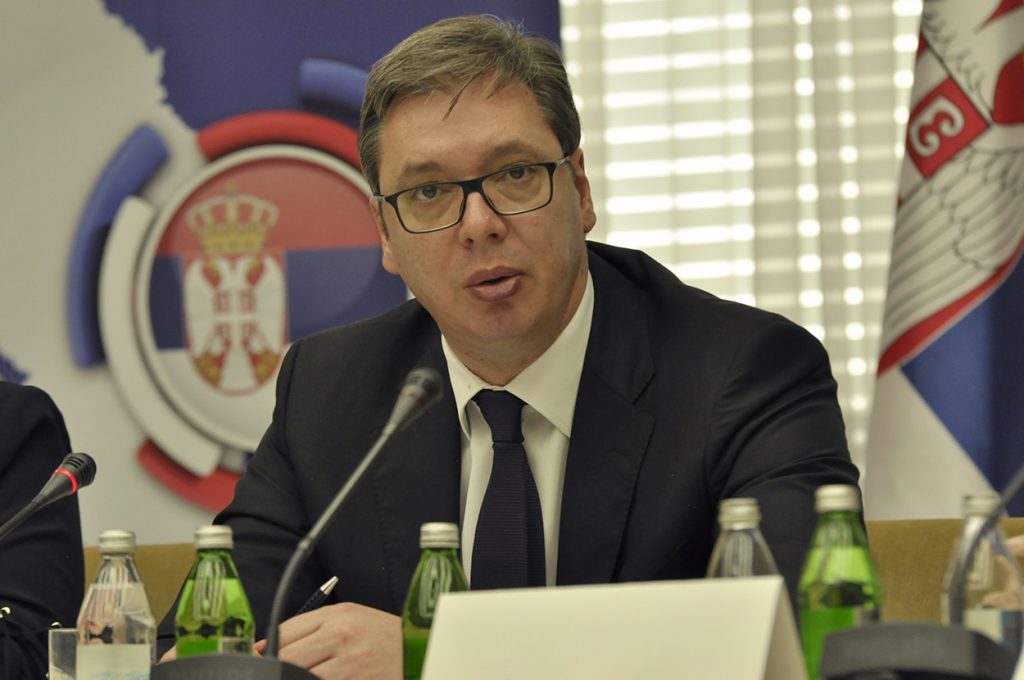 He finished elementary school “Branko Radicevic” in New Belgrade, grammar school “Zemunska gimnazija” (at that time, high school of vocational education, department: “Culture and public information – corrector / international corrector”), and graduated from the Faculty of Law in Belgrade as one of the best students in the generation. “I learned day and night, I used to read the same book for 20 times. Being smart is one thing, but one has to put in work.” (Press, 6 September 2010) He won the city and national competitions in history and was a pioneer champion in chess in Belgrade. He was a scholarship holder of the Foundation for the Development of Scientific Youth. He studied in Brighton, UK, where he spent more than a year attending the course of English.

Having graduated, he worked as a journalist at “Kanal S” in Pale during 1992 and 1993. He prepared and hosted news in English, global news segment, interviews, reportages.

He joined the Serbian Radical Party (SRS) in 1993 and was soon elected an MP into the National Assembly of the Republic of Serbia. Only two years later, he was elected the Secretary General of the SRS.

After the Serbian Radical Party won the local elections in Zemun in 1996, he became the director of the Sports and Business Centre “Pinki”. According to his official biography on the website of the President of the Republic of Serbia “he managed to reconstruct these abandoned sports facilities, and with successful operation he multiplied the incomes of the employees”.

When the SRS formed the Serbian Government with the Socialist Party of Serbia (SPS) and the Yugoslav Left on 24 March 1998, Vucic was elected Minister of Information. During his terms of office as a minister, he signed the Law on Public Information, which was remembered for the draconian penalties for the media, as well as banning daily newspapers “Dnevni telegraf”, “Evropljanin” and “Nasa Borba”. Today, when being accused of interfering with the work of the media, he replies that “it’s the easiest thing to attribute to him when there are no other arguments against him.”

In March 2002, he paid an extra profit tax of EUR 48,500 for an apartment of more than 100 square meters, which was given to him by the Government of Serbia as the Minister of Information of the Year, which he later redeemed.

Before the parliamentary and local elections in 2008, he said that unless he became the mayor of Belgrade, he would not accept the term of office as an MP in the Serbian Assembly and remained consistent with this view.

However, the Socialists decided to form a coalition at the level of the Republic with the Democratic Party (DS) and to terminate the agreement signed with the Radicals. Vucic was again the candidate for the mayor of the capital before the May 2012 elections, but the list of Serbian Progressive Party (SNS) won 24.3 % of the votes.

After the breakup in the Serbian Radical Party, when the then deputy president of SRS Tomislav Nikolic on 5 September 2008 resigned that function and the function of the head of the parliamentary group in the Serbian Assembly, forming his own parliamentary club, Vucic did not immediately announce whether he remains in the party or leaves it together with Nikolic. On 15 September, in front of the Belgrade City Assembly, he told reporters that he resigned to all functions of the party and withdrew from political life.

“For the past few days, I was silent, hoping that an agreement could be reached between the two dissenting groups in the Serbian Radical Party. But, due to the situation in the SRS, I resign to all functions in the party and I will withdraw from public life. I announced my decision to resign first to Dragan Todorovic and Tomislav Nikolic – said Vucic, noticeably on the brink of tears. “What will I do for a living from now on? I have my own profession, but maybe I will deal with some kind of business like stock exchange or I will help my brother in running the company. All things considered, do not worry about my subsistence.” (Press, 16 September 2008)

Nevertheless, Vucic announced at the beginning of October that he was entering the Serbian Progressive Party, and was elected Party’s Deputy President at the Founding Convention of the party.

After winning the presidential election on 20 May 2012, SNS leader Tomislav Nikolic withdrew from the position of president of the SNS, which he promised in the pre-election campaign, and in May 2012 Vucic became acting president of the party. At an extraordinary session of the SNS Assembly, held in September 2012, Vucic was elected for the new President of the SNS in acclamation.

By moving to the Serbian Progressive Party, Vucic completely changed the political views of the past and from the advocate of the Greater Serbia he turned into a supporter for Serbia’s membership in the European Union. “Asked how the nationalist with the idea of Greater Serbia became a Eurofanatic, Vucic replied: It was a process. It’s not that one morning you wake up and just say – I’m different – reports Deutsche Welle. Unlike many politicians in Serbia who act as if they are always right, I am not ashamed to say I was wrong. I made mistakes. I was wrong. Although it’s not easy, I confess my misconceptions – said Vucic.” (Fonet, 21 January 2014)

When at the end of July 2012 SNS, SPS and the United Regions of Serbia (URS) formed the Serbian Government, Vucic became the Deputy Prime Minister in charge of defence, security and the fight against corruption and crime, as well as the Defence Minister. The President of Serbia Tomislav Nikolic appointed him as head of the Bureau for Security Services’ Work Coordination. Vucic still holds the position today, although in 2014 he used to say he would resign.

For that period, Vucic states in the official biography: “He has been participating actively in negotiations between the Government of the Republic of Serbia and Provisional Institutions of Self-Government in Pristina, under the auspices of the European Union. He made a contribution to the signing of the Brussels Agreement in April 2013, whereby, for the first time since 1999, the realistic basis has been created for Serbian people living in Kosovo and Metohija to establish institutions that would be recognized by the international community.”

In January 2014, the SNS Presidency, on Vucic’s proposal, unanimously decides to hold extraordinary parliamentary elections. “I did not want to accept Ivica Dacic’s offer to be Prime Minister without elections.” (Vecernje Novosti, 26 January 2015)

In an extraordinary parliamentary election in March 2014, the coalition gathered around the SNS won a convincing majority of 48.35 percent of the votes (158 parliamentary seats), and Vucic became the Serbian Prime Minister.

In the new extraordinary parliamentary elections in April 2016, a coalition gathered around the SNS won 48.25% of the votes, but this time 131 parliamentary seats. Vucic remained the Prime Minister of Serbia.

In the presidential election in April 2017, he won the first round, with 55 percent of the votes won. He submitted his resignation to the post of Prime Minister of Serbia on 30 May, and the next day he assumed the office of the President of Serbia.

He points out that he is a “passionate reader, particularly of literature from the field of historiography and geopolitics, but also Serbian and world literature”, as well as that “he’s the owner of quite a big personal library”.

He is known as a wine lover and a wine collector. “A man who drinks wine cannot be a bad man. A person who drinks wine is a person who has a soul and who knows how and wants to relax. This is a man who has friends, because wine is not a wine without a friend.”(Press, 20 January 2011)

He speaks English, with basic knowledge of Russian and French.