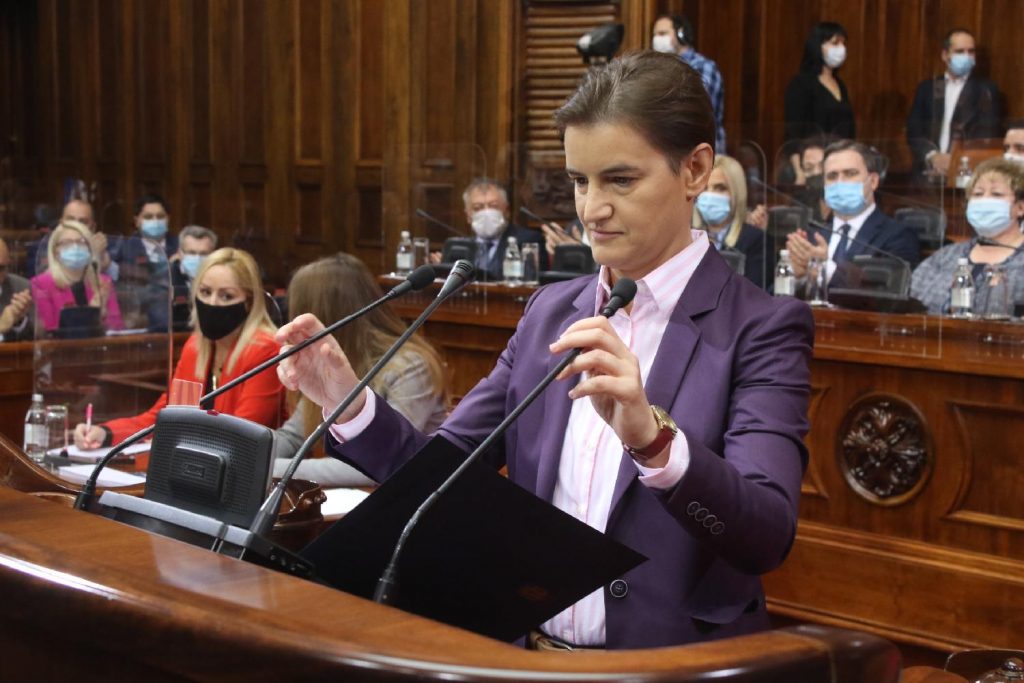 The obligatory creation of the Community of Serb Municipalities in Kosovo, the intensified fight against corruption and crime, pay grades, social mapping, assistance to families with children – these are just some of the topics mentioned by the Prime Minister of Serbia Ana Brnabić in the new exposé. She promised the same things using almost the same words in her previous exposé. Not even a part of it has been realised in the meantime.

We will not go too far into the past, only to the last Ana Brnabić’s exposé and to the five-hour speech delivered by Aleksandar Vučić in 2016, when the length of the exposé was inversely proportional to the length of the mandate. MPs of the Serbian Progressive Party, as well as the Prime Minister herself, repeatedly emphasised during the Assembly debate that they were proud that another continuity of the government was formed after 2014, which was considered to be a turning-point year in the latest interpretation of history. It remains unclear whether they are still proud and think it is positive when promises are persistently repeated, while their fulfilment is not even in sight.

Kosovo is far away

Admittedly, there are a lot of things that have been achieved or at least moved forward from the standstill since the previous exposé that Ana Brnabić delivered to the MPs on St. Vitus Day (Vidovdan) in 2017. Investments were made in health care (primarily large clinical centres) and road infrastructure, certain processes were partially digitalised, cooperation between schools and the economy was strengthened through dual education, salaries were raised and military neutrality was preserved.
These other promises are nevertheless more interesting, such as the Community of Serb Municipalities, that officials of the ruling majority remember only when the opportunity arises, and forget it when they travel around the world for negotiations that reached the stalemate.
“In addition to health safety, this Government will face huge political challenges, and here I am thinking primarily of our relations with Priština, of the continuation of the dialogue on normalisation and the problems in establishing the Community of Serb Municipalities, which, to be perfectly clear, we will not give up.“ (Exposé, 2020), Brnabić said on Wednesday, completely unencumbered, as if she had not stated three years ago: “It is necessary to urgently establish the Community of Serb Municipalities, in the manner envisaged by the first agreement and general principles from 2015”. (Exposé, 2017)
Before that, Aleksandar Vučić in a “big daddy of all exposés ever” pointed out that “First of all, Serbia should continue to insist on starting negotiations and (talks) on property and preservation of Serbian cultural and spiritual heritage in Kosovo and Metohija, and on the establishment of the Community of Serb Municipalities in Kosovo because, for those who do not know, and who criticised the Brussels Agreement, 40 percent, or six of the 15 points of the Brussels Agreement, are about the establishment of a Community of Serb Municipalities, which will have the capacity to decisively influence the better and safer life of the Serbian people in that area “ ( Exposé, 2016)
If we accept that the issue of Kosovo is realistic and cannot be resolved in one term, we will look at these smaller, but more vital topics that the government did not deal with, but could have.

For instance, social maps, that the Truth-o-Meter wrote about.
“We have important things to do in the field of social policy. The priority reform is to work on social maps that will enable citizens who are in the most difficult economic position to be more visible in the system, in order to exercise their rights to the necessary support in a timely manner. This will greatly improve the control of social benefits and, thus, will result in a much better (and much fairer) distribution of money,” the Prime Minister said yesterday, just like three years ago: “For the first time in Serbia, we will introduce an integrated social map system, by connecting a large number of different institutions. The introduction of social maps will prevent abuses and ensure a fairer distribution of social assistance.“ (2017)
There has been talk about pay grades for so long that, at a guess, no one believes in it anymore, but it still sounds nice.
For instance, when the Prime Minister says in 2020, “The most serious reform that awaits us is the introduction of pay grades. We have to finalise this and thus enable everyone in the public administration to be paid equally in relation to the job and the responsibility of the job, and not to have their salaries depend on where and in which state institution they work “, I believe that she thinks like in 2017 when she formulated the sentence just a little bit differently: “We will establish a more flexible salary system. We will enable the rewarding of institutions that responsibly dispose of resources, as well as employees who contribute the most to the improvement of the work of institutions, but where there are greater rights, there is also greater responsibility.“

The promise to reform public enterprises is already being vocalised as a buzzword, as if both those who speak and those who listen know that no government will give up that resource and that public enterprises in Serbia will be part of the election spoils for a long time to come.
“We need to work faster on public enterprise reform. This is a demanding process that we have already entered into with the support of partners such as the World Bank, the European Bank for Reconstruction and Development (EBRD) and the International Monetary Fund (IMF). This reform will not only help the budget, but will significantly increase the competitiveness of our economy “. (2020.)
But then again: “Subsidies to public companies have been reduced, and the government has severely limited them, with the aim of strengthening financial discipline. Out of 17 strategically important state-owned enterprises, ten have already had their status resolved, and the status of the remaining seven is currently being resolved.“ (2017.)
While Vučić in 2016 said no less than this: “In order to reform public companies, the restructuring of large systems in the transport and energy sector is planned, which will lead to their orientation towards market principles of functioning, and these are, of course, EPS (electric public utility company, “Srbijagas” (state-owned natural gas provider) and “Serbian Railways”. Within the arrangement with the IMF, Serbia has committed itself to introducing the principle of tight budget constraints in the operations of these companies.“ (2016)

In every exposé, the fight against organised crime is a compulsory chapter.
This year, something has changed because Brnabić put the protection of the President and his family in the first place, but the essence remains the same. All three analysed exposés contained “the continuation of a resolute fight against organised crime and corruption, especially though building the police capacities”, and each time a more efficient judiciary and reasonable lengths of trials were announced.
The leitmotifs of the continuity of the government include education, creative industries, culture, and minority rights.
What we did not hear in 2020, and three years ago was a part of the exposé, is the modification of the Constitution in the part relating to justice, as well as the adoption of a large number of regulations which harmonise national legislation with the EU acquis. It has been said that Serbia remains on the European path, but human rights, democracy and freedom of opinion are no longer topics of importance for the government, and neither for MPs.

(The text was created in cooperation with the Open Parliament.)