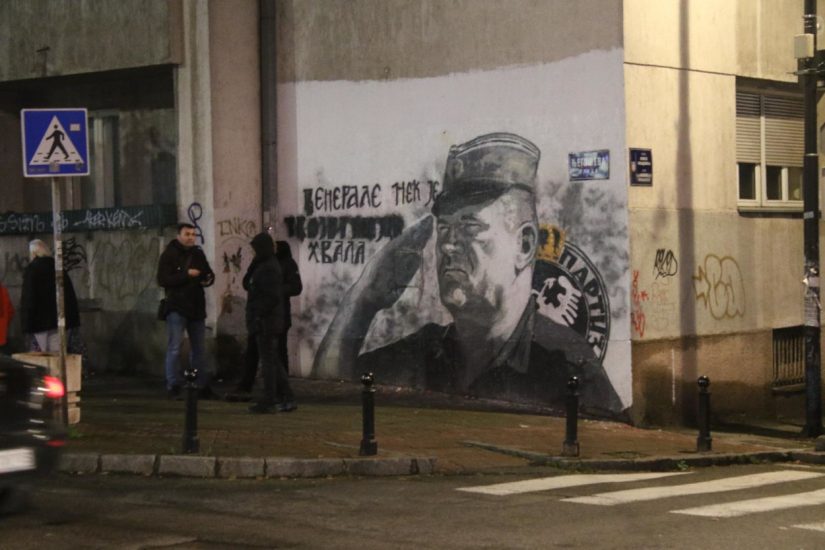 How did the mural painting of Ratko Mladić in downtown Belgrade stop being a painting and become a government-protected memorial? How does it refer to the Law on War Memorials, adopted three years ago in haste, supposedly supported by Aleksandar Vulin as a patron, who said that life sentence in prison for Mladić was a “revenge, not verdict”, advocating the creation of “Serbian world” on behalf of Aleksandar Vučić and SNS?

The destiny of two mural paintings in downtown Belgrade maybe best represent the atmosphere in the society and current government policy. The first, dedicated to the assassinated Prime Minister Zoran Djindjić in the forecourt of the Faculty of Philosophy, was destroyed several times, but the police failed to react.

On the other hand, because of the mural painting of Ratko Mladić in Njegoševa Street in Vračar, the finally sentenced war criminal, two activists Aida Ćorović and Jelena Jaćimović, were arrested because they threw eggs on it. This was their reaction after the Ministry of Interior (MoI) decided to forbid the Youth Initiative for Human Rights to remove the mural painting on 9 November, the International Day against Fascism and Antisemitism, despite the removal being
agreed with tenants of the building based on the inspection order.

Although activists claimed that on that day, the police was safeguarding the mural painting of Ratko Mladić, the MoI denied that, claiming that the police was protecting public law and order.

Instead, as President Vučić explained, the police were protecting the civil activists since “these boys would run over them”, referring to extreme right-wing activists since the police cordon had to intervene and separate them from the citizens who gathered to protests against Ćorović and Jaćimović arrest.

The mural painting was covered in white paint the following day, but it was thoroughly cleaned by the hooded boys, who introduced themselves as the Partizan football fans and the mural authors. The police allowed them to safeguard the mural painting in Njegoševa Street for days as some “Praetorian Guard”.

Regarding the question how was it possible that activists opposing the glorification of war criminals were arrested and not the football hooligans or extreme-right supporters who painted the mural and protected it, thereby glorifying the image of a convicted war criminal, Dubravka Stojanović, the historian, told Istinomer that would perfectly fit into the dominant ideology of the Serbian Progressive Party.

“This is the extreme right-wing party with the program of creating “Serbian world”, and that “world” is created by the means used to create Milošević’s state as the ‘state where the entire Serbian nation will live’, which was how he named this project. Ratko Mladić implemented that ideology in the field. It is not a surprise in reference to this”, said Stojanović.

In her words, the events related to Ratko Mladić mural represent the unadorned government policy “which is hiding behind the so-called European integration and other blinds that the regime rarely puts on lately”.

Youth Initiative for Human Rights has no dilemma that “the state is defending Mladić” through its actions.

“This is ‘the Serbian world’ monument, which has been very successfully based on ‘Greater Serbia’ ideology by Vulin as the chief operations officers on behalf of the present government. It demonstrated that the laws of (contemporary) Serbia were not valid here, including the Law on Public Gatherings, as well as the orders of the municipal police on removing the mural painting”, explained the Initiative.

Milosavljević reminded that Aleksandar Vulin was the patron of the Law on War Memorials that, in fact, “prohibits honouring of the war victims who are not of Serbian nationality in Serbia”.

“Back in 2015, as the Minister of Labour and Veteran Affairs, Vulin proposed the same proposal of the Law on War Memorials that was adopted later in 2018. He is therefore considered the patron of this law, but also because Ministry of Defence, that he was the leader of before, was promoting the war diaries of convicted war criminals such as Vladimir Lazarević and Nebojša Pavković”, said Milosavljević.

The Law on War Memorials was adopted under the urgent procedure on Vidovdan 2018, symbolically, prescribing that such monuments had to signify the cultural memory exclusively related to “tradition of Serbian liberation wars”.

The proposal for establishing the war memorial must include the description of the actual event “that is related to the legacy of Serbian liberation wars”, while the proposal for its removal must contain relevant proof that with its content it fails to represent the historical or actual facts; insulting general and government interests, national and confessional sentiments or public moral; that is has been dedicated to an event not related to the legacy of Serbian liberation wars, or that it symbolises the loss of sovereignty, territorial integrity, independence or Serbian freedom; that it has been built for a person representing fascists, Nazis, chauvinists, separatist ideas or ideology, or a person who has collaborated with the aggressors, occupation army, their allies or assistants.

It exempts all persons rehabilitated under the Law on Rehabilitation.

“This law disowns the memorials in Sjeverin and Prijepolje that have been already built, dedicated to the victims of abduction from Štrpce and Sjeverin, and on the other hand, it represents a law threatening that any memory represented by the proposals of building monuments not in line with the position that ‘Serbia did not participate in the 1990s wars’ will be rejected. Also, this law monopolises the government policy of remembering the wars in the
former Yugoslavia, leaving no room for remembering the victims from mass graves around Serbia, including Serbian refugees from the operation Storm who were forcefully mobilised by the Arkan’s units and the Serbian Ministry of Interior and became victims of torture”, Milosavljević categorically claimed.

To what extent does the Law on War Memorials correspond to the most dominant narrative of Serbs suffering the most significant defeat in the 20 th century and that the Serbian nation had only fought wars to defend themselves and never conquer others? Dubravka Stojanović said that such law perfectly fitted the narrative created in the early 1980s, establishing the psychological foundation for war.

“At first, it is important to know that we live in ‘world championship of victims’, which was defined by the Israeli intellectual Amos Oz, who warned that abusing victims through propaganda was very dangerous. This is the strongest sentiment as it makes the nation homogenous, sticking everyone together, increasing the feeling of being threatened and readiness to accept any dictatorship when such threat is looming. Cultural memory theories demonstrated that defeats and victims are more important for collective consciousness than victories and heroes. That explains the nationalist narrative celebrating precisely this form of understanding the past since the Kosovo battle”, explained Stojanović, the historian.

Regarding the entire story related to Ratko Mladić’s mural painting, the government representatives and some right-wing-oriented opposition parties could not refrain from criticising the activists who demanded it to be removed.

Vučić asked them a question “why for eight years so far they failed to go and destroy the stone with Aćif-efendija name, who the ICTY did not convict but the authorities of Serbia, Yugoslavia”.

This referred to Aćif Hadžiahmetović (Aćif-efendija), a mayor of Novi Pazar in the Second World War, who was sentenced in 1945 after being charged for collaboration with the occupation army. This memorial board was placed in 2012 in Novi Pazar, in the presence of the then minister without portfolio, Sulejman Ugljanin.

Bearing in mind that since 2018 the state had the legal basis to remove the disputed stone in Novi Pazar, it is questionable why the state failed to do so or why it would not do it now, instead shifting the responsibility to the civil activists.

“The state will not do that since there is a symbiosis between Serbian nationalism as dominant in such cases cohabiting with Bosniaks or any other minority nationalism, and what is common among them is to respect the legacy of collaborationism instead of antifascism, and the only victims they perceive are those belonging to their national ‘body’ and not people whose lives were violently severed. This is the reason we will still have the stone of Aćif-efednija, and continue to have Ljotić’s marches during the state celebrations and the current initiative of the Alliance of Vojvodina Hungarians wishing to commemorate a war criminal such as Miklós Nagy, the mayor of Novi Sad during the occupation, along with other victims in the scope of the new monument for ‘innocent victims of 1944/45’ in Novi Sad”, noticed Milosavljević.

What does ‘Serbian world’ mean for ‘Greater Serbia’?

How do the events related to Mladić’s mural, persistent denial of the government that genocide in Srebrenica happened, Vulin’s messages that creating ‘Serbian world’ was the most important mission of the present generation of politicians, really confirm the thesis that the same ideological platform as in the 1990s has been in power in Serbia at the moment?

Whether “Serbian world” advocated by the former Yugoslavia Left official meant the same as the “Greater Serbia” of the Serbian Radical Party, advocated in the 1990s by Aleksandar Vučić, the then Radical follower?

“I am sure it is the same since that programme was never called into question. What we could usually hear was that the moment was not now, but that international balance of powers would change providing an opportunity to finish unfinished business”, said Dubravka Stojanović.

Stojanović added that many had paraphrased Dobrica Ćosić – Serbia should won in peace what it had lost in the war, warning that winning by peace was not possible since borders were only altered through war.