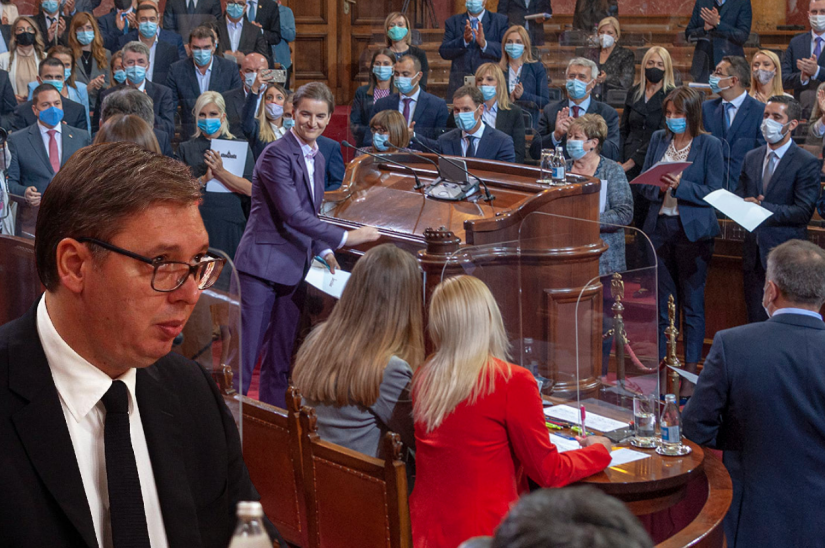 The one year of work of the Government: we do not have the system, but we have Vučić

Even before it was inaugurated, the current Government of Serbia celebrating one year of work in this convocation had a fixed term which meant a shorter mandate. If we observe the records of Istinomer, the ministers did not, in fact, dabble in their job, as instead of them, all relevant topics had been addressed by President Aleksandar Vučić. On the other hand, they did not feel ashamed when the opportunity arose to express their admiration, love and respect for him. We could have always seen Prime Minister Ana Brnabić willing to condone any affair or criticism in public. Besides her, we could have heard Minister of Finance Siniša Mali, back and forth, who preferably talked about salaries by presenting – what was not true, and as for the public performance, the prominent figures also included the debutant Minister Tomislav Momirović and the veteran Aleksandar Vulin.

Prime Minister Ana Brnabić started her term with the nonsense that the new ministers had nothing to do with politics before this convocation, neglecting that a minimum of three of them had already been active in politics.

She continued to condone the criticism of government work by mentioning false data or even abusing the facts, such as a recent statement that the progress was noted in all areas in the European Commission Progress Report. To be accurate, in the same document, there is a lot of room for such interpretation and bragging of not so magnificent results. Still, we could have expected someone leading the executive to read the entire Report and not only the abstract.

In her guest appearance in TV show “Hit Tweet”, a few months ago, she had used the classic propaganda rhetoric used in the 90s by expressing her resentment that the NATO bombing in 1999 operation was named “Merciful Angel”, although several years ago it was verified that the operation was never named like that.

One of the most memorable press conferences in the previous year was when details on the arrest of the criminal gang of Veljko Belivuk were presented by President Aleksandar Vučić, Minister of Police Aleksandar Vulin and Prime Minister Brnabić. In 74 minutes of the conference, false information and lies we had heard from the highest officials were overshadowed by cruel scenes of crimes and victims and, in fact, the media taking it out on the citizens.

To be true, it was no surprise that Aleksandar Vulin behaved like that since he persistently denied the genocide in Srebernica, acting surprised that the judgments even mentioned something like that, ignoring even the Tribunal in Hague and its documents.

He did not understand where did criticism of the work of the police during the July protests last year came from, when the representatives of the domain he was the leader of, in his words, had been very restrained. Except that they had not been restrained, since more than twenty videos of police intervention ended up as the proof in the office of the Ombudsman, and the public had an opportunity to see it for themselves.

Minister of Finance Siniša Mali mainly was faithful to his ministry regarding statements that Istinomer had fact-checked and his role regarding the affair of “off-shore” business, disclosed in the project “Pandora Papers”. While he was using the benefits of the Virgin Islands’ tax haven, Mali assured Serbia citizens that their salaries were increasing each month and that massive dismissals due to coronavirus crisis did not occur – that not being true. He was convincing us that minimal salary was 15 thousand RSD eight years ago, that not being true, that Air Serbia had not suffered losses before coronavirus, and that he proved his PhD thesis was not plagiarism.

Minster of Construction Tomislav Momirović continued where his predecessor Zorana Mihajlović left – failing to meet the deadlines for the infrastructure construction. He failed to fulfill both the promise on the commencement of works on the construction of the highway Niš-Merdare and the promise of not increasing the tolls.

The remaining ministers rarely appeared in public but were always ready to commend the President of the state, even the minister who these days was accused of high treason and cooperation with the criminal gang by the tabloids close to the government. Grave accusations did not seem to impede Nebojša Stefanović to continue performing one of the most responsible functions in the Government and the country in general, so despite everyone’s expectations, he did celebrate the first anniversary of the Government as a member of Brnabić cabinet staff.

This turned out to be not much of a problem since, as Aleksandar Vulin recently said, why do we need a system when we have Vučić?