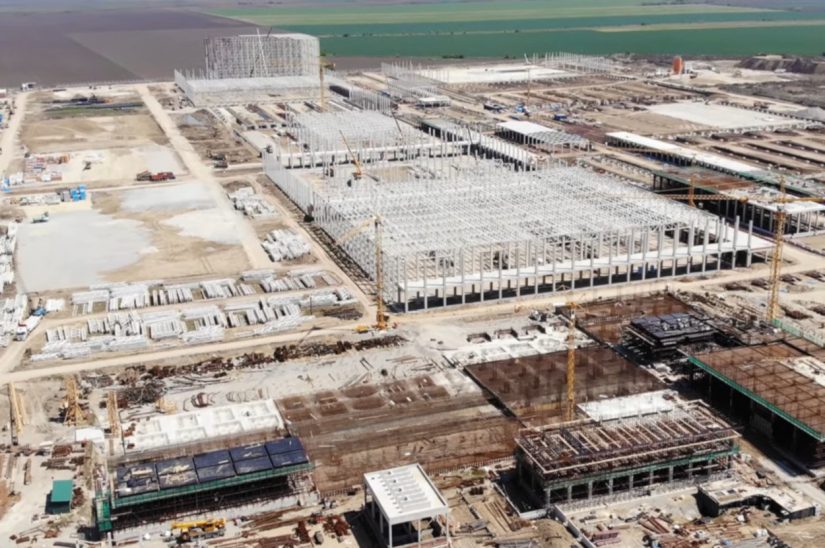 The case of Linglong: Violating the law pursuant to Feng shui

Violating labour laws, inhuman housing conditions of Vietnamese workers, and accusations of possible human trafficking, to mention only some of the controversies in Chinese company Linglong ever since it started the construction of a car tire factory in Zrenjanin three years ago. How come that Linglong – the most significant foreign investment presented as historic by the authorities, became one of the grandest affairs and synonymous with violation of the laws in Serbia?

The news that Shandong Linglong Tire, the Chinese car tires manufacturer, was to build a factory in Zrenjanin, in the framework of the Belt and Road Initiative, a project by Chinese President Xi Jinping, was presented as historic three years ago. As government representatives claimed, although Poland and the Czech Republic were among the candidates, Serbia succeeded in attracting the biggest investment that would benefit Banat and the entire country.

The Agreement on the construction of the factory was signed in August 2018, when it was announced that the Chinese company would invest $950 million, producing more than 13 million tires a year. The then Chinese ambassador in Serbia, Li Manchang, said that the Agreement would not have been signed if not for President Aleksandar Vučić, who directly negotiated with company representatives.

“We have fought every day. I said that they would have the most favourable conditions if they came to the Central Banat District. We want to bring back life, hope, to make Banat rich”, Vučić said then.

Company Shandong Linglong confirmed that they were attracted by the conditions Serbian authorities had offered. The company’s portal announced that it was decided to invest in Serbia due to the small costs of investment, construction, labour force, and energy used compared to other countries in Europe.

How exactly Serbia attracted the Chinese company became apparent in the spring of the following year when Linglong was gifted with 96 acres of arable land worth EUR 11.9 million.

Immediately afterwards, amid Vučić’s campaign “Future of Serbia”, the construction of the “biggest covered factory in Serbia” commenced in a total area of 500,000 square metres.

For things to run smoothly, under Feng shui indeed, the foundation stone was laid precisely on 10.18 a.m. on 30 March 2019, as the investor wanted. Company president Feng Wang believed that to be a good sign, initiating business in March when the flowers sprout.

“Mr Wang was a tough person for negotiations”, Vučić said after the foundation stone was laid and explained that earlier he spoke to the first person in Linglong saying that Serbia “would offer at least 10 per cent more favourable conditions than those offered by other countries in the region”, and that “labour force in our country is for sure better”.

In parallel with the beginning of the factory construction, Shandong Linglong Tire company became a sponsor of the Serbian football SuperLiga for three years. This league was later named after the Chinese company.

In June 2020, Serbia gave the Chinese investor EUR 75.8 million of government grant to construct the pneumatics factory in Zrenjanin. As reasons for requesting government assistance, the Chinese investor mentioned accelerating the project realisation, and the Commission for State Aid Control noted that this company had undertaken to hire permanently at least 1,200 workers by the end of 2024.

This was not the end of it. Two months later, the councillors in Zrenjanin City Assembly decided to name the road going through the industrial zone where the factory was being constructed Linglong Avenue, to flatter the Chinese investor even more.

On the other hand, citizens of Zrenjanin and activists of Zrenjanin organisation Gradjanski preokret were protesting from the beginning due to the construction of a car tires factory amid fertile arable land in the city for two decades never had healthy drinking water.

From the begging, the organisation Gradjanski preokret underlined that construction of the plant commenced without the Environmental Impact Assessment Study and warned that only ten kilometres around the future factory, the food was being produced in Banat arable land.

Therefore, it was of particular importance to pay attention to the impact of that plant on the environment. The organisation also warned that Zrenjanin did not have wastewater treatment. Wastewater from the Chinese plant would be discharged as untreated to the sewage, meaning already polluted Begej.

The organisation Gradjanski preokret underlined that, including the land gift, Linglong received in total EUR 83.5 million from the state while this grant assistance exceeded the required incentives for opening new job positions.

The Renewables and Environmental Regulatory Institute (RERI) claimed that financial assistance to Linglong was not awarded in accordance with the Law on State Aid Control and corresponding Regulation. This organisation warned that Law on Planning and Construction and the Law on Environmental Impact Assessment were also violated.

Both organisations filed criminal complaints to the Basic Public Prosecution in Zrenjanin against persons in charge in Linglong for building without the construction permit. The organisation Gradjanski preokret filed it after the competent civil engineering inspection confirmed that the Chinese company erected eight facilities without the construction permit on the 47,000 square meters building site in Zrenjanin.

Due to potential environmental pollution and lack of appropriate construction permits, citizens and activists got organised and protested in front of the Chinese factory construction site in Zrenjanin, demanding foreign investors and the Government of Serbia to abide by the applicable laws of the Serbian state.

Prime Minister Ana Branbić response to protests was that the “Luddites movement” was behind them, as they protested “against investments coming to Serbia”. At the same time, President Vučić assessed that ecological protests organisers were “selfish” since they wanted to “deprive” the citizens of Central Banat District “of normal life”, by “exercising pressure on investors who are investing EUR 850 million in Serbia”.

In a similar tone, full of understanding for the Chinese investor, after several days of silence, Vučić commented on the disturbing revelation of the slaving working conditions of about 500 Vietnamese workers who worked on the construction of a Chinese factory.

The President said that he failed to comprehend the meaning of the media and political campaign against company Linglong, which was going on, in his words, for a year now, similar to “all campaigns against all Chinese companies”.

“Should we destroy $900 million worth of investment? We will strive to help the Vietnamese workers too. Still, I will not chase away the investors”, Vučić said, adding that in the factory in Zrenjanin, “an inspection was sent based on the pressure and that it was confirmed the housing conditions were poor, but that they will improve it”.

After the public pressure, Vietnamese workers were moved from dirty and dilapidated shacks where they had been living for months without heating, hot water, and sewage.

The Initiative for Economic and Social Rights – A11 and Anti-Trafficking Action (ASTRA) submitted the complaint regarding the possible human trafficking for labour exploitation, after a conversation with the workers when they concluded several indicators supported this – Vietnamese citizens were paying to come to Serbia, they were misled about the working and residence conditions, their working status was not regulated, and their employer had taken
away their passports.

If anyone doubted that Chinese company Linglong appeared as a slave labour camp, the videos showing how private security guards prevented activists from driving the whistle-blower from the factory surroundings would remove any suspicion.

Namely, in one of the videos, one can hear how a security guard literally asked the activists, “what is your basis for taking away the workers” and “do you have an order” and then one activist replied in shock: “Do we need an order to take away a human? Why, is he a slave!?”.

The N1 team was also certain that a Chinese investor operated as the state within the state, as an unknown male blocked their vehicle with his car, probably one of the Chinese managers, in his attempt to prevent them from reporting on the status of Vietnamese workers.

While President Vučić claimed that the campaign against Chinese investors in Serbia was undergoing, Prime Minister said that all institutions were doing their job and that this case was politicized, but the European Union said that images of Chinese factory Linglong for sure did not belong to the 21 st century Europe.

“All workers in the EU candidate countries deserve safe working conditions and comparable standards of protection. I urge the relevant authorities in Serbia to investigate this case thoroughly”, specified Vladimír Bilčík, the European Parliament Rapporteur for Serbia, on his Twitter account.

Several MEPs underlined that the Serbian government silence on the forced labour in Linglong meant they were the accomplices in modern slavery and appealed to the competent authorities to react immediately to these apparent violations of labour rights and human dignity in the country.

“Serbia must demonstrate that it belongs to the European family of nations by promoting high standards of human and workers’ rights, including through conducting thorough due diligence of Chinese investments in the country and through the enforcement of labour and environmental standards”, read the press release published at the website of Viola von Cramon-Taubadel, who is an MEP and representative of the German Greens.

Contrary to Prime Minister earlier statement that “Chinese investors are no longer dirty but modern technology”, several concerned comments came from Brussels related to the increasing Chinese influence in Serbia and the environmental impact of the Chinese companies.

Drawing attention to the series of heavy industry Chinese investments in Smederevo, Bor and Kostolac, as well as the tire factory Shandong Linglong in Zrenjanin, 26 members of the European Parliament sent a letter to the European Commissioner Olivér Várhelyi, appealing him to “remind the Serbian Government to adhere its national legislation, including the EU rules related to the accession process”.