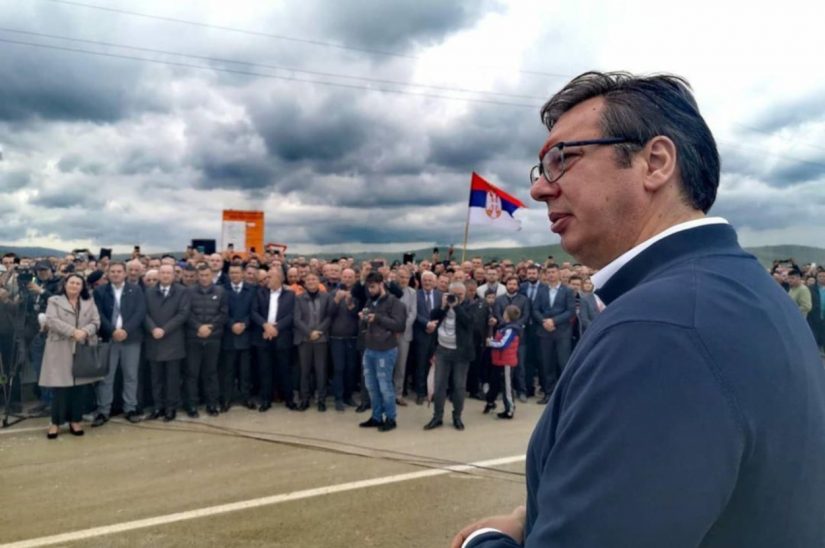 Serbia on the European path, hand in hand with Russia and China

The first article of the Serbian Constitution reads:

“Republic of Serbia is a state of Serbian people and all citizens who live in it, based on the rule of law and social justice, principles of civil democracy, human and minority rights and freedoms, and commitment to European principles and values”.

Although at least, on paper, Serbia is taking the European path, new chapters were not opened for almost two years. Since it became a candidate for the EU membership in 2012, Serbia opened 18 out of 35 chapters, and only 2 were provisionally closed.

One of the chapters significant for the EU accession is chapter 31 – Foreign, security and defence policy.

Common foreign and security policy of the EU aspires to speak with a single voice concerning foreign policy and is mostly based on unanimity of member states, which is a mechanism for adopting joint declarations and guidelines on political and security issues leading to joint diplomatic action. The decisions defining the EU relationships regarding specific issues are adopted as well as measures for implementing Common foreign and security policy, including the sanctions. (Source: europeanwesternbalkans.rs/poglavlje-31/)

However, as it was stated – “during the reporting period, the alignment patterns remained largely unchanged”.

“A number of statements and pledges were made by high-level officials which went contrary to EU positions on foreign policy”, as stated by the European Commission.

“What is important is that we have made our promise to raise the rate of alignment with European Union foreign policy decisions, and we have lifted it from 48.28 per cent to more than 62 per cent”, President said on the first day of September. Then he added that “there are specific limitations concerning the complex binding of Serbian interests related to Kosovo and Metohija“, also commenting “that is not that simple as it looks”.

President highlighted “something interesting” for the journalists:

“In addition to the official part and outside of the Western Balkans topic, which might be one of the most important ones, China is the only topic discussed. As soon as the cameras turn off, since in front of the cameras you hear talks about climate changes, Green Agenda, but no one ever mentions that during any of the real conversations or at lunch, since for the remaining time the only topic is China”, the President disclosed, also saying that both Europeans and Americans are obviously preoccupied with China.

According to information from the International and Security Affairs Centre, Serbia records a minor drop in alignment, since the total percentage in 2020 was 56%, while the lowest alignment rate in Serbia so far was 47 per cent in 2017, and the highest rate was 66 per cent in 2015.

This analysis specifies that the percentage is only a descriptive category referring to the general alignment trend. It is essential which topics Serbia has not aligned with.

One of the authors of the analysis, Igor Novakovic, said for Istinomer that his survey demonstrated that Serbia was primarily not aligned with those declarations related to Russia and China, so he assumed that it was due to the support these countries were giving to Serbia in the Security Council regarding the Kosovo issue.

“If there are fewer declarations related to Russia and China then the number of declarations we support, meaning the alignment rate, is increasing”, said Novakovic.

For example, he recalled that in 2012 and 2013, the alignment was over 90 per cent, but, “During these two years, almost no declarations were referring to Russia and China”, Novakovic said.

“This explains everything, as a percentage is a matter of illustration since it basically fails to reflect the essence, and the essence refers to topics”, our interlocutor said.

Numbers are not really relevant, explains Vladimir Medjak from European Movement in Serbia for Istinomer.

“Numbers are completely irrelevant if you go to Washington and sign an agreement of relocating the embassy to Jerusalem and appoint an ambassador to Damask, absolutely contrary to EU foreign policy position, then those things are completely irrelevant”, he mentioned, adding that Serbia “is far beyond that point where percentage can impress anyone”.

Our interlocutor cannot see what should be done to change the essential alignment rate of Serbia with the foreign policy decisions of the European Union since it is to a great extent related to the matter of Kosovo.

“Independent foreign policy here is the equivalent of “not aligned with the foreign policy of the European Union”, but again, this is not, in fact, independent since here independent means not aligned”, explained Medjak, asking a question – “What has Serbia gained by opening an embassy in Syria, as it has only created a problem with the EU”.

Alignment is not the same as support

According to Medjak, it is a particular problem that although Serbia has demonstrated it is aligned with something, it is not supporting that:

“We have introduced sanctions for Lukashenka, supported the reprimand of Lukashenka’s regime by the European Union, and then apologised to him. It clearly has been said here – we had to that because of the EU, but we do not believe in that”, Medjak believed.

In the words of our interlocutor – if we talk about the European values and act completely the opposite, it is only a matter of time when someone will ask if Serbia is at all compatible with the EU.

“Are our values more compatible with Lukashenka and Erdogan or the European Union”, Medjak wondered, adding that “decision on our accession to the European Union will be adopted by the countries seriously upholding human rights”.

During 2019, the organisation CRTA implemented media monitoring and analysed the daily press (Blic, Informer, Kurir and Novosti), online portals (Blic, B92, Kurir and Telegraf) and central news and morning shows on RTS1, Pink, TV Happy and Prva. The results demonstrated that the EU was represented dominantly neutral, the USA and NATO negative, and Russia and China positive. In particular, on RTS, there was no negative content regarding Russia and China, but there was negative content on the EU, the USA and NATO.

Relationship with Russia, China, EU and the USA

President of the state most often runs the foreign policy of Serbia. At the crack of dawn, he has Russian lessons, in his free time, he talks to his friends from China in Chinese, signs documents in Washington and directs Serbia towards Europe.

The relationship between Serbia and China seemingly “flourished” in the last years, with the increase in investments.

Igor Novakovic said for Istinomer that if we do not insist on certain standards of business with China regarding environmental protection and quality of construction works, the Chinese most certainly will not.

“If we fail to take care of the European ambitions, regarding the respect of the rule of law, environmental protection and other – everything we get from China could be at risk at one moment – meaning that some of the companies will not be able to adapt to European standards”, explained Novakovic.

On the other hand, the essence of closeness between Russia and Serbia is primarily based on political reasons. The first, because of the Kosovo issue, as Russia has a right of veto in the Security Council. The second, Russia has a renowned reputation in the Serbian public and its support could be relevant for internal politics.

Milan Krstic, the founder of Centre for Social Dialogue and Regional Initiative and teaching assistant at the Faculty of Political Science at the Department of International Studies, in this interview for Istinomer last year said that the grounds for closeness between Russia and Serbia, in his opinion, could be visible in the following:

“Serbia depends on the Russian Federation when it comes to gas, and in addition, it signed a free trade agreement with Russia, which was later extended to Eurasia”.

On Serbia’s relations with the United States, he said that the USA is an important player regarding security.

“The USA has the Bondsteel base and has the main word in KFOR, so it is undeniably important regarding the safety of Serbian people in Kosovo. It is a leading country in NATO that surrounds Serbia from all sides”.

Regarding the relations with the European Union, maybe it could be best described by the quote made by Aleksandar Vulin, minister of defence back then: