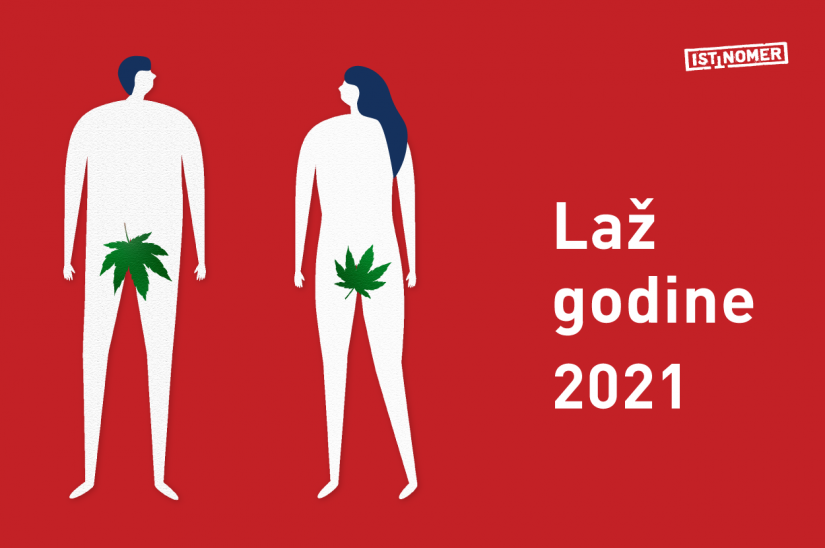 I am not a frequent TV guest – the Lie of the Year!

Evident to anyone who owned a TV set at home, the Lie of the Year 2021 award went to the President stating that he was “not a frequent TV shows guest”. Aleksandar Vučič took us for fools when he asked a journalist (in one of his “rare” TV appearances), “Did we have any elections?”, ranking as the second statement in our annual poll. The politicians treated us with obvious, banal, visible and easily fact-checked inaccuracies for the entire year, and the third place was won by the Minister of Finance Siniša Mali, who “proved I stole nothing” (meaning his PhD).

In the course of the year, very few political actors’ statements received positive assessments from Istinomer, and the amount of negative assessments would have been higher if we evaluated politicians for repeated but already confirmed falsities. Aleksandar Vučić remained an undisputed lord of the public space during 2021 as well, so he dominated the Istinomer pages as the political actor with most fact-checked statements – that mainly proved false.

The rule of law, electoral conditions, media, health care, economics and economy, ecology, energy products prices and even “fancy arugula” – no topic was left untouched by President, expressing his opinion in public. Among other, he convinced us that we had the highest salaries in the region, and the cheapest electricity in Europe, and we stopped counting how many times he repeated the false statement that the average salary in 2014 was EUR 330.

By fact-checking the winning statement of the President, we did not only rely on the impression that he “pops out of our fridge”, that was in his words, now fuller than it ever was, but on specific data. We counted that in 2020 he appeared 37 times as a TV show guest, excluding the purchased time on TV in the election campaign, most of it in TV Pink studio – 11 times.

The final score of the President media appearances excluded several minutes long “statements”, such as almost half an hour interview in Washington broadcasted live by TV Pink or a ten-minute statement for RTS news bulletin on Serbian delegation participation at the World Economic Forum in Davos.

“Come on, people, that’s what they said last year when we gave the helicopter money, EUR 100, to each citizen of Serbia. Did they say we will have elections? Come on, Srdjan, say if it was like that? So, did we have any elections?”, Aleksandar Vučić blurted out to one of the journalist’s questions in April and – acted as if nothing happened. We did have the elections, of course, immediately after citizens had received EUR 100 from the state in June 2021.

While the Minister of Police Aleksandar Vulin assured us that he would arrest people for as little as one joint, it seemed that one ton of marihuana became acceptable. Predrag Koluvija, the first defendant, charged for the production of 1.6 tons of drug in the farm “Jovanjica” was decriminalised by the media close to the government and its representatives’ messages.

President of the state, among others, “ruled” that two years of detention for Koluvija exceeded the punishment for the offense he was charged for, “since he killed no one”, and that half of the others, such as Germans, already legalised marihuana, which turned out as false.

It is interesting that although this was another year of the coronavirus pandemic, it was not a dominant topic in political actors’ public appearances. However, the representatives of the government persuaded us here and there about the importance of the vaccination, but on the other hand, the media gave ample space to a former member of Crisis Response Team for fighting against coronavirus and famous pulmonologist, Branimir Nestorović, to make fun of the scientifically established facts and health care institutions relevant data.

Prime Minister Ana Brnabić had a response to every criticism – “its politicization”. So among others, she tutored us in political science, explaining to us about fascism operations. In her opinion, this included roadblocks and citizens’ protests. Except that it was not true since these were legitimate expressions of civil disobedience many times before in modern political history.

In a TV guest appearance, she used a myth from the end of the 90s that the 1999 NATO intervention was named “Angel of Mercy”, which was denied a long time ago.

Recently, the state university in Belgrade revoked Siniša Mali’s PhD, Prime Minister’s colleague, that he had obtained at the Faculty of Organisational Sciences (FON) in 2013, persuading us in July that he proved he had stolen nothing. He mainly kept to his capacity in public instead of facts. If we listened to the Minister of Finance, one could say we live in abundance since he persisted that salaries grew each month, and there were no redundancies in time of corona, and eight or nine years ago minimum salary was RSD 15 thousand – so not true.

Anyway, Progressive Party representatives persistently convinced us that the world had never existed before they came to power, so the SNS Executive Board President, Darko Glišić, said that the former government had never made a single kilometre of a highway, let alone hospitals.

In their version of history, before 2013, football was not even played, so the Prime Minister claimed that back then, we could not win over the Faroe Islands.

Even if they used the facts in their public speech, the government representatives would twist, alter, abuse, interpret as they want, manipulate, and spin them, which turned into, we could say with certainty, the main characteristic of the public speech in Serbia.

In the following year, the Istinomer team will continue with fact-checking, revealing and unmasking disinformation and manipulation, and to You, our dear readers, we wish fewer lies and fewer Vučić’ appearances on TV.