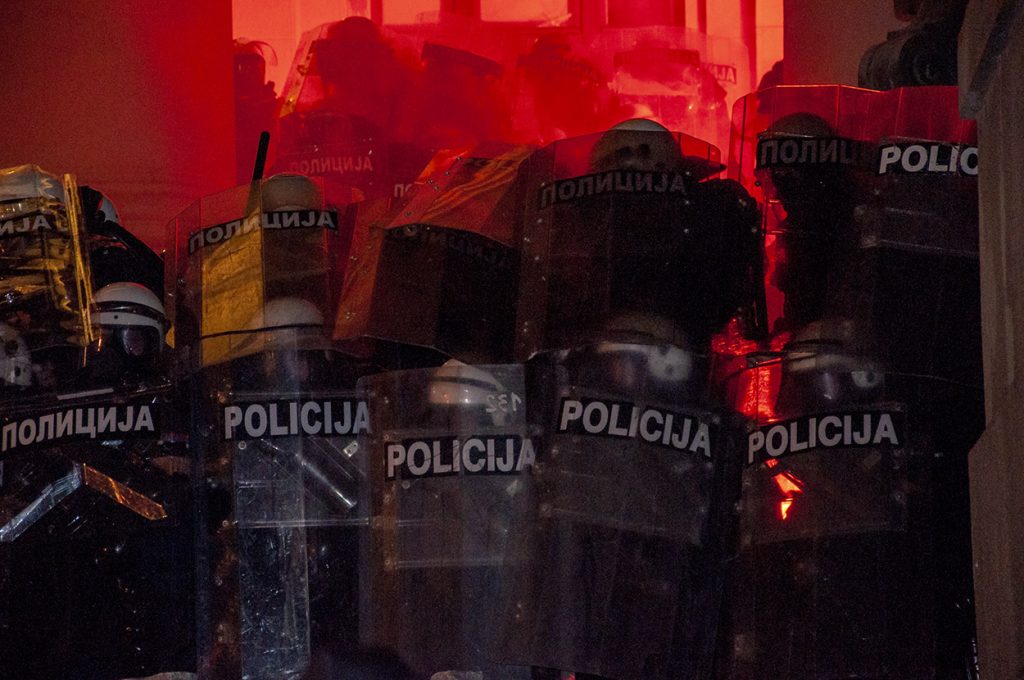 “No one has interrogated me for the alleged insult of a person in the official capacity, and I am not aware if they are doing anything with my complaint”, says Milan Grubetic for Istinomer, who was one of the protestants arrested during the protest in July, but had also suffered violence. His case seems to be – the matrix. By the report of the Ombudsman, the team of the National Mechanism for Prevention of Torture had noted the numerous omissions by the Ministry of Interior (MoI) representatives during the protests in Belgrade. The Belgrade Centre for Human Rights (BCHR) filed 32 criminal complaints for the police violence, and they now represent 18 citizens regarding these complaints before different government authorities. “We have 18 clients, and so far, the prosecution interrogated only one of them before the District Public Prosecutor’s Office (DPPO) in Novi Sad. For the unknown reasons, this client is not interrogated in the capacity of the victim, but as an ordinary citizen”, said BCHR representatives for Istinomer.

Milan Grubetic is an engineer living in Kostolac, and he suffered injuries and was arrested on the night between 11 and 12 July. Photo of his bloody face circulated the media, and in the mid-August he has said for Istinomer:

“This action was not provoked by the protesters but by the police. So there is a question – who ordered this action because they should be liable for that. For all the injuries people suffered those who inflicted them are to be blamed, of course, in the line of command, also the person who issued orders should liable, since there was no need for that.”

Our interviewee says there has been no developments to this day.

“I cannot wait to at least meet with the police officers who had allegedly heard me insulting them as a defendant in the Misdemeanour court, so I can ask them if they had seen who had hit me and with what. If they were there, I guess they must know it, since they were arresting me and their attention was focused on me”, says Grubetic, adding that police officers are cowards since they are afraid to face him both in the proceedings where he is a defendant, and in the proceedings where he is a victim. “They are only brave when they use rods to beat bare-armed Serbian youth and shoot people in their backs”, says Milan Grubetic.

Report of the National Mechanism for Prevention of Torture of the Ombudsman, which was recently made available to the public, proves, on the basis of the citizens’ complaints, that during the protests in July many rules were broken and that police officers did not care about the procedures. Istinomer has been informed from the Ombudsman Office, that under the citizens’ complaints, the Ombudsman has submitted recommendations to MoI at the beginning of October.

“The authorities have 60 days to respond and it is not over yet, so we expect that the answer on the actions taken under the submitted recommendations will be delivered in the given deadline”, we were informed by the cabinet of the Office.

As the same time, the Ombudsman is performing the control of the legality of the police actions for more than 20 cases of violence which were mostly recorded by citizens’ or the media cameras.

The Belgrade Centre for Human Rights is carefully monitoring further activities of the Ombudsman and the Ministry of Interior.

“It is indicative that the Report of the National Mechanism for Prevention of Torture was submitted to the MoI almost two months after the protests, so Belgrade Centre for Human Rights learned about the Report contents only after the Ombudsman had delivered it to us, responding to our request for access to information of public importance. So the public was not familiar with the content of the report before, and the Report was not published on the official Ombudsman webpage”, says Sanja Radivojevic from BCHR.

It is worrying that the victims have not been even heard yet.

“DPPO in Belgrade, where there are 16 cases processed under criminal complaints of our clients, has not organised a single hearing of any of the victims and it is not certain when we will see that these cases will “start rolling”, says Radivojevic.

“On the basis of the information we have received on individual proceedings of the Ombudsman which are processed under the complaints of our clients, the Department for Interior Control of the Ministry of Interior has delivered a statement saying that based on video recordings that were submitted with the complaint, where the police abuse was recorded, it was not possible to ascertain the identity of the police officers who had acted in the case concerned”, our interviewee had said.

The Belgrade Centre for Human Rights will insist that individual liability of police officers for abusing citizens must be established, as well as the liability of their managers for concealing those actions.

Judges were in a hurry…

This organisation has recently published the most important parts of the Report “Police conduct towards persons deprived of freedom during the public gatherings in Belgrade”. The findings from the Report mostly match the testimonies of the protests’ participants who in the previous months witnessed what they had survived to the media.

Among other, the majority of citizens who were taken before the misdemeanor courts complained that they were not allowed to invite their attorneys since the judges “were in a hurry” to complete the proceedings.

Majority of citizens complained that they had no possibility to consult their attorneys, in fact, that they had given statements to the police without presence of the attorney, and that they were also not able to notify their families on their arrest.

The police claimed that the majority of arrested had not wanted or asked to notify their family members on being deprived of freedom.

For some cases which were recorded on video, the National Mechanism for Prevention of Torture believes to be the cases of the police violence of abusive character. Many citizens have said that they were arrested by the persons in civilian clothes who had not introduced themselves as police officers.