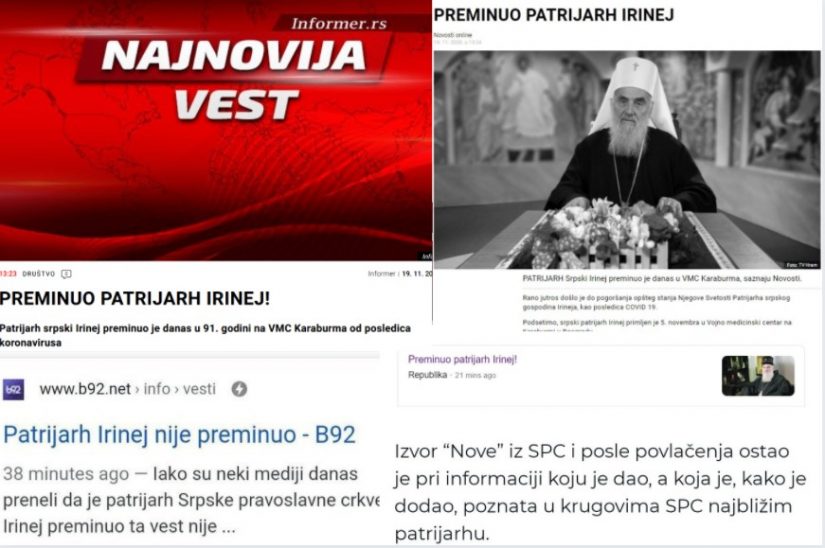 In less than 24 hours Patriarch Irinej has died twice, mostly owing to the hysterical race of the inconsistent media reporting in Serbia and – very particular – editors’ actions. The irreplaceable role in the 24-hour bizarre show was played, as expected, by the President Aleksandar Vucic team, who this time was the master of ceremonies.

Almost unbelievable, but similar as in the case of the metropolitan bishop Amfilohije Radovic three weeks ago, we almost had a rerun – the news was announced, the SPC refuted it, and then the information was withdrawn. Then again, the piece of news – he had died. Only this time, things were blown out of the proportion, disturbing at so many levels, and not only for the Orthodox believers.

Yesterday, about 13.20 hours several portals, among other informer.rs, novosti.rs, pink.rs, republika.rs, as well as nova.rs announced that “as they have learned”, the head of Serbian Orthodox Church had died. Some of them even launched this info as a “push” on the applications. Only ten minutes was needed for the public to get the retraction, first in the row.

Kurir and Telegraf announced that the Patriarch was – alive. “Nevertheless, that lie that Nova S and some other tabloids have reported that Patriarch died is not true. He is alive. He is not well, but he is alive”, learned Kurir unofficially mentioning that the Patriarch’s condition was severe.

Some of the media will withdraw the news, and some would delete it, the third – explain – what had happened, referring to their sources. About 14 hours, a new wave of “information” had followed.

The Serbian Orthodox Church, within several minutes’ difference, issued two releases. In the first, they announced that the health status “got worse this morning”.

Only several minutes later, we had severe criticism.

“We deem utterly irresponsible and immoral such false reporting and willful deceiving and disturbing of the entire public, even by some church individuals, and even some media who had deserved some trust by now”, said the other release.

Some newsrooms decided to delete their news, to neglect the reliability of the source and surrender to the new wave. Who is the church individual who said to the journalists that Irinej had died, and stayed consistent, despite the refute – remained unknown.

In the afternoon, after sufficient time had been dedicated to the conspiracy theories, deepening of the distrust in the mainstream media and speculations if the man had for sure died or not, the President Vucic himself entered the scene.

There was a police exercise demonstrating how successfully Serbia can fight against terrorism. In contrast, in real life, the fight against infection is ongoing, but the public could have heard all the morbid details on the health status of Patriarch Irinej from
Aleksandar Vucic himself.

In a series of announcements, it was not enough for Vucic to impart only scarce information about Patriarch’s condition and how serious and worrisome his condition was at the given moment.

The public had to hear everything about the intubation, drainage, repositioning and turning, and the other. All this at the moment when a human being was, as according to the official information, on the ventilator and the doctors were fighting for his life.

In its second part, the film that the nation was watching, continued in even more – how ironic – sensational rhythm. All the dilemmas that the daily news editors had during the morning were no longer there. Patriarch was alive and what it should be done was to follow the President’s scenario, who, after everything, had also been shaken.

The logical sequel of this preposterous reporting on the Patriarch Irinej condition followed this morning. The news on his death was first reported exclusively by Aleksandar Vucic on social media.

Denying the meaning of the news reporting, taking over the role of the supreme source of information is nothing new. But most of all – it was both brutal and disturbing, with PHOTO and VIDEO, that we had witnessed that the media did not trust their sources, did not trust the journalists and had lost faith in themselves. How can the readers believe them? Yesterday, they shared the role with Márquez Santiago Nasar, for whom everyone had known that the end was near and nothing was done about it… In a chain of distrust, one man and his Instagram profile became the most reliable and the quickest media.