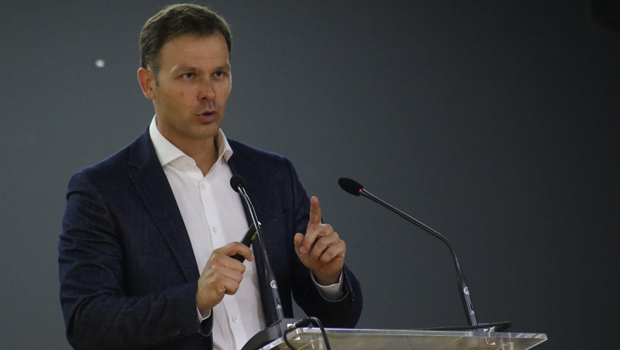 The Minister of Finance of the Republic of Serbia, Siniša Mali plagiarised his doctoral thesis, but it did not have an impact on his functions within the Government. The five-year saga began in 2014 when Professor Raša Karapandža found that parts of the work of the then-Mayor of Belgrade Siniša Mali had been copied and stolen. No sooner than this autumn did the University of Belgrade draw the same conclusion. The first man of the Serbian state finances lost his highest academic title. However, this did not prevent him from dealing with the Serbian budget for 2020. Scandals linked to Siniša Mali caused citizens’ protests and petitions, but remained only on paper, in a form of controversial issues written in this official’s biography.

An economist, Siniša Mali (47) began his political career after the October 5th democratic changes in Serbia. In 2001 he became Assistant Minister for Privatisation. Nonetheless, he was soon transferred to the Privatisation Agency. In the following years, he built his biography as a financial expert and consultant. He was elected Mayor of Belgrade in 2014 and remained in office until last year. Despite numerous affairs, not only he did not disappear from the political scene, but he even became  – the Minister of Finance.

In 2014, in a text written for a portal “Peščanik”, the professor Raša Karapandža brought serious accusations against Siniša Mali. According to official information, the then-Mayor obtained his PhD from the Faculty of Organisational Sciences at the University of Belgrade in 2013. Nevertheless, his thesis titled: “Value creation through the process of restructuring and privatisation – Theoretical Concepts and Results Achieved in Serbia” soon got the epithet of one of “the worst plagiates”.

“In short, Mr. Mali is nothing if not eclectic in his plagiarism – he lifted from other doctoral theses and scientific papers, and did not refrain from using Wikipedia nor about 20 pages literally copied from the website of the Privatisation Agency. Mali did not just pinch a little bit, but plagiarised entire chapters. In addition to the Mayor, accountability also lies with the members of the committee, who allowed such a perverse doctoral thesis like this one to be defended.”, wrote a group of authors at the time, commenting the work of Mali. (Peščanik, July 9th, 2014)

This is how one of the longest-running affairs began not only in the academic circles in Serbia, but also in the political life of Serbia. Siniša Mali’s mentor stood in his defence, and the dean of the faculty demanded that the whole case be examined. The debate on the original scientific contribution of his work was being opened up at all levels of the scientific community, as well as in the circles of political actors. The Faculty of Organisational Sciences was about to receive an assessment that the procedure had been carried out correctly and that the competent committee of professors had positively evaluated the thesis.

In the meantime, after a recheck, a professor who had mentored Siniša Mali, established that only literature had been inadequately used. The opposition therefore raised its voice and demanded Mali’s resignation. However, the then-Mayor still firmly stood behind his work stating that his thesis was “a result of twenty years of work in the field of enterprise restructuring”.

Initially, the University of Belgrade rejected the report submitted by the Faculty of Organisational Sciences stating that the thesis was an authentic work. The opinion about the controversial doctoral thesis had been prolonged for months, and it had become one of the key features of this political scandal – stalling. Meanwhile, the University of Belgrade adopted the Rulebook on the procedure of determining the non-academic misconduct regarding the submitted papers, as well as the new Code of Professional Ethics. It was not until the end of 2016 that the decision came from the Faculty of Organisational Sciences – the thesis was not plagiarised and everything was carried out in line with the law! The report was adopted at the level of that institution and forwarded to the University.

However, such an epilogue was not welcomed in this academic circle. In January 2017, a request to form a new – expert – commission arrived. And the saga continued, as did the war in national tabloids.

Apart from the controversial doctoral thesis, Mali was also in the focus of public attention after the demolition of several private facilities in Savamala, Belgrade, on the night after the April 2016 elections, due to the construction of the “Belgrade Waterfront project”. Mass protests followed, demanding that Mali resign. He was the actor in several other affairs, including “24 flats in Bulgaria” and “45 bank accounts”. As a matter of fact, the report of the Administration for the Prevention of Money Laundering from November 2016, showed that Mali controlled at least 45 bank accounts, some of which not being opened in his name, and, according to KRIK, there were multiple suspicious cash transactions in which the then-Mayor of Belgrade participated.

“I don’t personally know Siniša Mali. This is not a personal slight against him. He is actually the only man whose doctoral thesis could be read online from abroad, as it was published on the University Library website”, explained for the media professor Karapandža from the EBS University in Germany, who triggered the entire affair (Danas, June 8th, 2017.)

This professor soon became the target of sensationalist texts in the media, which openly defended Siniša Mali. Twists in the academic society continued, as did stalling about any outcome whatsoever of the controversial thesis. Resignations, debates on competencies of committees and the experts’ standpoints intertwined.

A new echo on Siniša Mali’s status came from the Prime Minister who stood behind his election to a new function. Although the public largely expected his resignation from the Mayor’s function and potentially even his withdrawal from the political scene, this did not happen. In May 2018, Ana Brnabić announced that the University of Belgrade would form a new committee for the third verification of the thesis. Brnabić stated that at the assembly session which was dedicated to Mali’s appointment for the minister’s function after an MP asked a question about his incompetence given all affairs that had been emerging.

This case gets more specific outlines only with the appearance of Ivanka Popović, the new rector of the University of Belgrade. Shortly after taking office, she declared that an end had to be put on the case of the Finance Minister’s controversial thesis. She said the first step in ending the case would be to pass adequate regulations, but that the formation of a committee would also be a problem.

‘The case is so much under the spotlight of the public, often unobjectively and emotionally viewed, that many people refuse to join the committee that will analyse the doctoral thesis and thus become part of the media circus.’, said Popović.  (N1, June 3rd, 2018)

Visible steps towards a resolution have only been happening this year. A new committee was established again, but for months there has only been a succession of decisions and appeals. In May 2019, 140 professors signed an appeal against Mali’s doctoral thesis. Two months later, a group of students blocked the Rectorate demanding that Mali be relieved of his duty.

‘The University lost its integrity by returning Mali’s thesis to the Faculty of Organisational Sciences for reconsideration and proved that it did not have the courage to examine the case to the fullest extent. Today, we have come here to help them’, stated  Valentina Reković, a student from the initiative.

However, the whole time, Siniša Mali has had the support of fellows from the Serbian Progressive Party, as well as of the country’s first man. The Serbian President Aleksandar Vučić persistently “defends” Mali. Governments spins in pro-regime media came down to highlighting Mali’s graduation and his student success. In the argumentative defence of the Minister of Finance, it was pointed out that a PhD was unnecessary for the position of a minister, and any kind of political accountability regarding the potential plagiarism was repressed.

“Imagine, you are asking someone to interfere with the election of the Government?! Siniša Mali does not have to have any degree. In order to become a minister, you need to pass the Assembly procedure and to gain people’s trust. You do not need to have any degree. You can have only a primary school diploma and still become a minister. This is a matter of a political choice. Whoever proposed it is politically accountable. This is just ‘let’s create some more chaos because we can provoke someone to send the police to intervene”, said Vučić.

In mid-September, the Belgrade Rectorate was blocked by a group of disgruntled students, and that screenplay ended with an agreement reached with the rector Popović, who stood by them At the end of October, the Scientific Council of the Faculty of Organisational Sciences publicly condemned Minister Mali, and twenty days later, the Ethics Committee of the University of Belgrade amended the faculty decision and passed on a second-instance decision. They found that the minister had violated the Code of Ethics by taking over parts of someone else’s work without quoting sources. The University Senate unanimously cancelled his doctoral thesis on December 12th, thereby putting an end to this story. All worldwide media reported on of this affair.

The Minister might try to challenge the decision before the Administrative Court.

President Aleksandar Vučić’s most recent comment referred to a piece of advice that he had given earlier to Siniša Mali. Vučić actually said to Mali to “tear down his thesis and write a new one”, of which Prime Minister Ana Brnabić testified. According to the Serbian president, Mali, however, decided to “put his career first, before their fellowship”.

It remains unknown whether Siniša Mali will pay the price and sacrifice his career in the upcoming period. In the midst of preparations for the upcoming parliamentary elections in Serbia, Siniša Mali, despite all the scandals, still retains his seat in the Government.