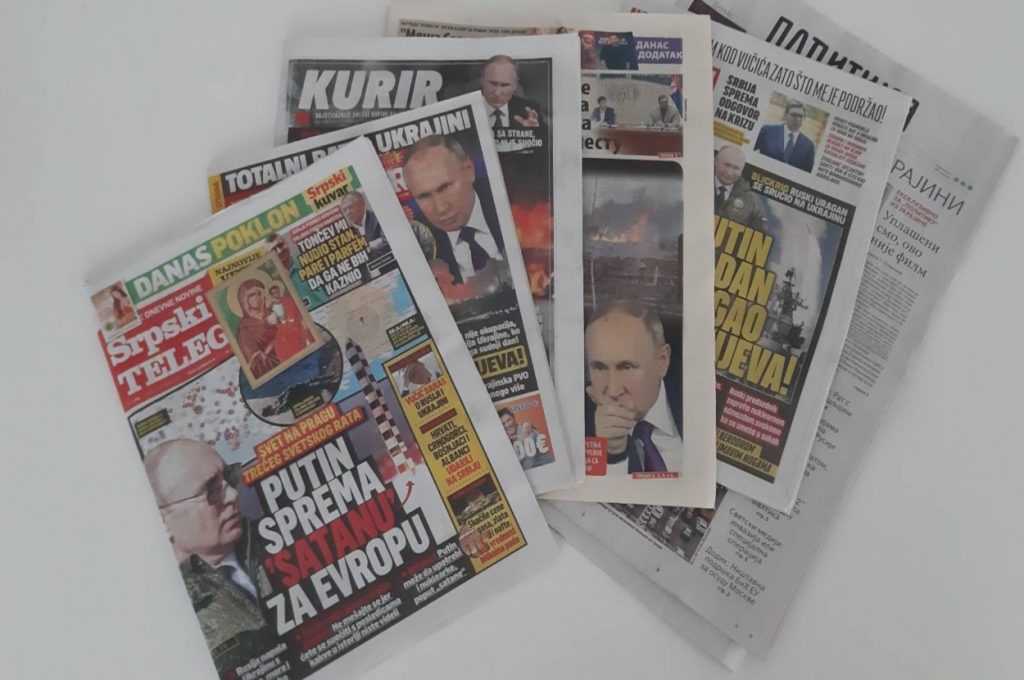 Since the beginning of the war in Ukraine, CRTA’s monitoring of Serbian mainstream media has recorded around 20,000 clippings pertaining to the war. (NB: The monitoring covers morning shows and central news of four televisions with the highest ratings, four most read dailies and four most visited online media, followed by 70% of those interested in news.) Several dozens of anti-Western narratives were identified in these clippings that may be classified as disinformation and five that are among the most frequent ones were selected for content analysis.

One such message is that the entire Western military machine has been deployed against Russia, leaving it with no choice but to strike back with brutal force. This unsubstantiated claim, traced back to Russian media sources, was rehashed in several variations by a number of mainstream media, including TV Happy, Informer and Večernje novosti. At the same time, cases of exact matching of narratives published in the Russian and in the Serbian media were recorded too, such as the disproved narrative of the European countries having entered a long-term energy crisis and “rolling back into the Middle Ages”.

Energy is among the most common topics on which the narratives carrying disinformation are produced. Many Serbian media, including Informer, Novosti and Pink picked on a catchy piece of debunked Russian propaganda and reported that in Switzerland it is possible to report neighbours who overheat their apartments and receive 200 EUR as reward, while the culprits behind overheating may end up in prison. Conspiracy theories can be found too, such as accusations of the UK and the US for sabotage and explosions of the Nord Stream 1 and 2 gas pipelines put forward by B92, Mondo and Novosti. The same message was registered in Russian media outlets.

A recurring claim that the EU sanctions have a boomerang effect, hurting Europe more than they hurt Russia was rehashed dozens of times by Serbian dailies, including Kurir and Večernje novosti. This unsubstantiated message can also be linked to pro-Kremlin outlets, as recorded in the EUvsDisinfo database.

However, Serbian mainstream media remain anti-Western, rather than pro-Russian. Since 2017, CRTA media monitoring (of the total of around 160,000 clippings), recorded constant rise in anti-EU reporting, while pro-Russian reporting had been relatively steady over the years and started increasing significantly only with the spike in news reports on Russia related to the war in Ukraine. Furthermore, only less than one third of the narratives conveying disinformation are pro-Russian, while around two thirds are anti-Western. Still, with the blooming of the pro-Russian disinformation campaigns the Serbian mainstream media have been inspired to step up their anti-EU, and more broadly, anti-Western messaging.