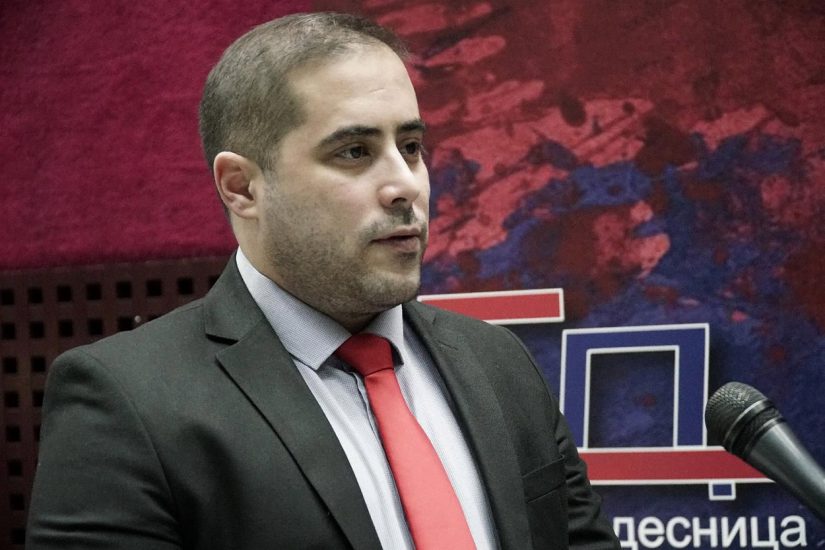 Miša is not Vojislav

Yes, he is Šešelj – No, he is not Šešelj

There is a reason to believe that Miša Vacić is supposed to play the same role of a “bugbear” as Vojislav Šešelj did during Slobodan Milošević’s reign, but the important difference is that the leader of the nineties felt confident enough to allow and assist the political growth of a highly intelligent man, unlike Aleksandar Vučić, who plays multiple games, without giving anyone even a theoretical opportunity to seriously strengthen.

Here is the perfect proof that even if they resemble a lot, they are not the same. These days, Miša Vacić is all over the place and therefore we most often hear that he is a “new Vojislav Šešelj’s version“, i.e. a “bugbear“ produced by Aleksandar Vučić according to the model that Slobodan Milošević used to bring up Šešelj.

That theory, however, does not take into account the essential difference between Šešelj and Vacić – of course, this is not about their physical dimensions, but about their abilities. Something important can be concluded about the employers of the two aforementioned pragmatic extreme right-wingers.

Milošević felt confident enough to allow and help the political growth of a highly intelligent man whose party not only won a huge number of votes throughout the years but also allowed that key persons of the today’s Serbia acquire political skills in it, including Vučić.

It is, of course, clear that he had reasons to believe that he was able to control “his own” rogue extremist and to use him to frighten the West at any time. Nevertheless, the eloquent and sharp-minded Šešelj, deprived of the tiniest shred of morale, had enormous appeal for militant layers of society, but also for members of the army and the police – which, at least at a theoretical level, could pose a threat in case of growing proliferation of ambition.

Today’s powerful man of Serbia, however, has opted for a much safer model and plays multiple games. He does not give anyone the slightest chance to strengthen. Šešelj is still around, always ready to help – to offend, to badmouth, to threaten and to shock decent people, but he has lost exclusivity in that important task and it is not likely he will have it ever again.

After all, it is clear that this is a player who is quite worn out and behind the times – in the last year’s Belgrade elections, for example, the list he led won only 2.34 percent of the vote, which was not enough to reach the election threshold. The Radical Party dropped to such a low result from a solid 8.1 percent, won in the 2016 parliamentary elections two years after the leader returned from The Hague tribunal.

However, Belgrade has never been a key radical base and it is probably not entirely impossible to raise the popularity of Šešelj and his followers to a more striking percentage – or otherwise help them on the Election Day. But how much is it advisable to rely too much on the person from whom you have taken over a good deal of the party – regardless of your demonstrated cooperation and successful collaboration after prison?

On the other hand, the need for special operations has increased – the opposition has started to raise its head, various forms of protest have erupted throughout Serbia, and Vučić’s reputation in the West has been seriously jeopardised as even after eight years in power, he has failed to make a serious step towards the expected resolution of the Kosovo issue, but has managed to “capture the country” and establish various forms of cooperation with Russia and China.

In these circumstances, what could be more logical than reaching for something that could be described as “Less than Šešelj, more than Sima Spasić”, the latter being suitable only for street events, in charge of yelling into a megaphone, in order disable any communication of opposition representatives with citizens?

And who would fit into such a defined profile better than the repeatedly vetted Miša, who is always willing and able to use all his capacities in the war against any “traitors” and other dubious elements that fail to please the head of state. And that, we saw, is going quite well, perhaps because of his natural talent and great efforts, and perhaps because – he does not know anything else.

After all, he does not have a resume – we do not even know which school he went to, as in 2011 he declared for the Kurir newspapers that he had finished a senior year at the Faculty of Law, whereby in 2014 during the Belgrade elections, he stated that he was an economist by vocation.

In the documentary film “Who is Miša Vacić”, the promotion of which was attended by the Minister Zoran Djordjevic, three deputy ministers and one secretary of state, it is however claimed that after he had left for Germany with his parents at the age of 16, Miša got secondary and associate education.

It would, of course, be completely incorrect to suspect a version of education abroad just because of the fact that Vacić has difficulty expressing himself even in his mother tongue (Serbian) – but this is not particularly important, given that having a real diploma no longer represents a recommendation for discharging public duties in the progressive Serbia.

Despite the fact that the film was made, it is difficult to speak of any biography in the educational and professional sense of the word. However, Vacić cannot be said to have any history: back in 2013, he was sentenced to probation for spreading discrimination against the LGBT population, illicit possession of a weapon and obstruction of an official in the performance of their duties.

Vacić claims to have returned to Serbia after the March 2004 pogrom in Kosovo. He has been a spokesman for the 1389 Movement and twice an unsuccessful council candidate in Belgrade and New Belgrade. The persistence, however, has started to pay off over the last two or three years.

We were reminded of Vacić’s existence in the episode about the famous “decorated train” with the inscription “Kosovo is Serbia” written in 21 languages which failed to arrive in Kosovo in January 2017. While sharing his visit cards showing that he was employed in the Office for Kosovo and Metohija, Vacić unwarily invited himself for a guest appearance on the N1, after which he was fired, as such a spectacular debacle was impossible to cover up.

A multifunctional element useful for the government

In January 2018, he was unanimously elected president of the Serbian Right and six months later, on the “Emperor Constantine and Empress Helena celebration day” the programme was adopted based on four basic elements – traditionalism, patriotism, a healthy society-congruence, and Eurasian integrations.

Although it has failed to register as a political party to this day, the Serbian Right has done something far more important for political work and dutiful service – it has established about fifty local committees and acquired councillors in a dozen of municipalities, although it has participated in the elections only once, in Medvedja.

And that in quite a spectacular way – Vacić and his associates reached 6.25 percent of votes thanks to black SUVs, paying visits to voters, inspecting the register of soup kitchen users (that they even published!) and surveilling and filming ballot printing.

Much of the process of forming the Serbian Right infrastructure, however, has not attracted as much public attention as has been the case in recent weeks. A part of the public is convinced that Vacić thoughtfully (although it is unknown who the thinker is) maximised his threats to place himself in the focus of a few media which are not controlled by the government.

When he threatens that he will bring the “meanest motherfuckers” from the Serbian Right to Bujanovac to chase off “domestic traitors who collude with Shqiptars”, or when he announces in Šabac that its mayor Nebojša Zelenović “will end up in the Drina“, Vacić, actually acts as a “multifunctional” element multiply useful to the current government.

Because of threats he utters, Vacić “acts” on the national and the international level. Just like Milošević once used Šešelj to present himself in the West as an acceptable solution, Vučić can nowadays say to his international interlocutors “Do not pay attention to my autocratic way. You can see what I am up against and who could be in power if there were not for me!”

The threat of outrageous extremism is also useful for diverting attention from the numerous and increasingly embarrassing affairs that the head of state is linked to one part of the public has recognised the game and keeps urging the media to ignore Vacić’s efforts.

But ignoring cannot suppress another effect of his actions – fearmongering towards the opposition and the ethnic minority members, which seriously jeopardises their security. In other words, they are ordered to keep quiet if they do not want to get smashed in the head, or something along those lines.

But, that is not all

If we were to use the TV sales vocabulary of non-political products, we would say – but that is not all. The government strategists must realise that by assisting Vacić’s actions they essentially provide themselves with an ideal mediator in controlling the behaviour of a part of the far-right population.

And this can be useful in a variety of situations – from opposition rallies that can be easily torn apart by these groups in a way that the government’s hand remains invisible, down to different forms of messing with the far-right portion of the society in case that the unpopular agreement with Priština is signed.

And there is more to it, and that is why we talk about his multifunctionality. If there is a strong urge to display the rule of law, nothing easier than to put Vacić behind bars. Incidentally, that is what happened to Šešelj in Milošević’s time. And there was nothing (politically) wrong with him. On the contrary.

There have been interpretations according to which Vacić’s heightened activity is linked to the announced boycott of the elections by a part of the opposition – but it is not quite clear whether the calculation if it really existed, was correctly done.

Because both boycott advocates and opponents managed to reinforce their position by mentioning the Serbian Right: For the boycott opponents, the possibility that the Serbian parliament has a composition mirrored from Medvedja is a strong reason for participating in elections and fighting extremist influence in institutions.

At the same time, boycott advocates say that Vacić’s example shows how unjust the electoral conditions are – and with a reminder of what the elections in Medvedja looked like, they also speak of an inexplicable financial hinterland that provides for all those billboards, for example, that adorn the streets of Serbian cities. And this further strengthens the conclusion and the necessity of the electoral boycott.

There is also a theory that in the aforementioned financial area lies the motive of Šešelj’s assessment that “the authorities act scandalously in the Krušik affair” which was interpreted as a “coup” on Nebojša Stefanović, who is practically the second prominent figure in power in Serbia.

Fight for a role

According to this (unprovable) theory, the radical leader sent a warning that he was dissatisfied with the emphasis on a new actor who is stealing his favourite role and already threatening to send him into retirement.

Even it is true, it might be that the nervousness is fleeting – after all, this is how Tomislav Nikolić managed to fix himself quite a satisfying deal, so why would not it be possible for the most intelligent of all three former closest associates, the father and the founder of the radical thought, dr Vojislav?

And as far as multifunctional Miša is concerned – we can say without any doubt that his time is yet to come in these ever so complicated circumstances. Although, probably, members of his family believe that he has already achieved much more in life than anyone had hoped.