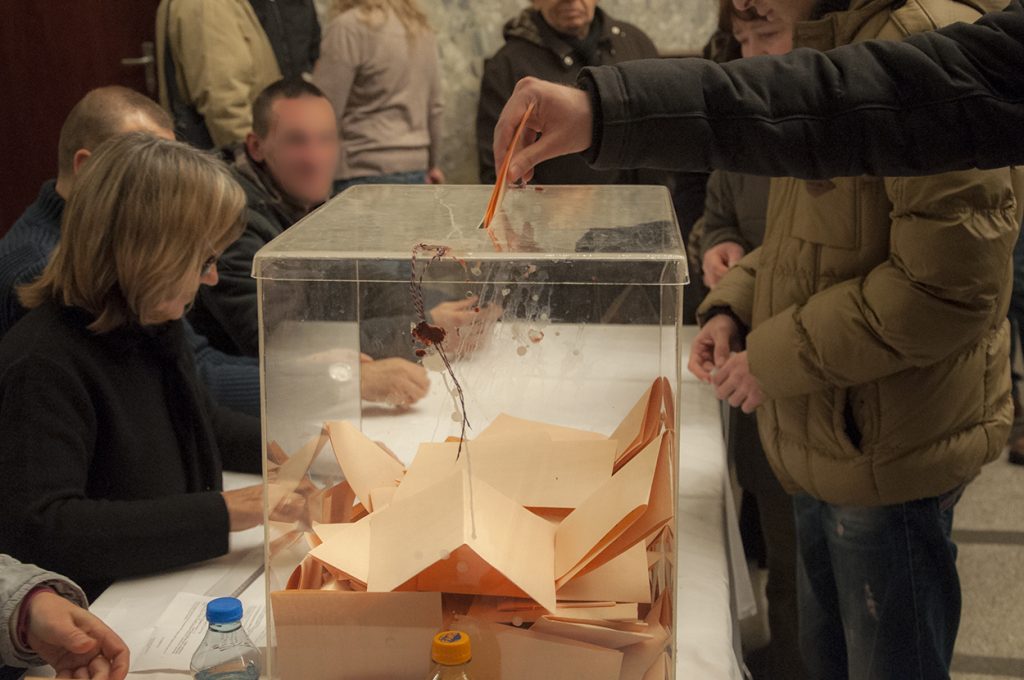 Electoral conditions: a public official or a party official?

Today’s topic of the discussion between the government and the opposition is the misuse of public office and resources which is the main barrier for free and fair elections. Two most recent electoral processes – local elections in Belgrade and local elections in Lucani, Doljevac, Kula and Kladovo were characterized by these shortcomings. How does it look like when on the official webpage of the municipality there is an invitation to citizens to vote for a specific party, why public officials must not merge party and public activities and what was such an important business in Lucani that a vehicle of District Heating Company Novi Sad was in Lucani on the Election Day?

Open or hidden engagement of public officials for promotion of the party, public “advising” to the employees who should they vote for, organizing free programme for voters with the tax payers money, using public spaces for party’s rallies, using public enterprises and institutions vehicles for driving the voters to voting.

We could have witnessed all of this during the elections in Serbia. The last two electoral processes organised in our country – local elections in Belgrade and local elections in Lucani, Doljevac, Kula and Kladovo from the last year, have almost erased the boundary between the public and the party. How the abuse of public resources, irrelevant of the type – public office, institutions, assets or human resources, becomes the main obstacle for free and fair elections?

One of the main characteristics of the local elections in Belgrade campaign in March 2018 was the officials’ campaigning which did not differ much from previous electoral cycles at local and republic level.

However, the officials campaigning in Belgrade was rather distinctive compared to previous elections, most of all due to the fact that the local level of government is much closer to the citizens. Namely, at the “local level” the voters most directly feel the impact of decisions and moves of the city government, so the city and municipal officials “merged” their regular activities with the promotion of their party almost every day.

The practice of using city and republic public office for party promotion was repeated almost by all electoral lists (government and opposition) with their representatives in the institutions who are in some way prominent and famous in the public.

The CRTA observation mission recorded that the officials campaigning was most prominent in the pre-election campaign of Serbian Progressive Party and Socialist Party of Serbia. One of the reasons, definitely, is that these lists have the most representatives in the current city, municipal but also republic government.

It is quite unusual that the highest officials of the Republic, including the Prime Minister, as well as the President of the Republic, were openly involved in the campaign for the election of local councillors in the City of Belgrade Assembly, although their competences are not at all related to local level of government.

Then, for example, Jadranka Joksimovic, as an international secretary of the Serbian Progressive Party, and the Minister of European Integration in the Government of the Republic of Serbia, in her conversation with the citizens of Savski venac municipality during the pre-election campaign pointed out that “Serbian Progressive Party implements responsible development policy for the benefit of citizens of Serbia, and SNS has established very important and specific international contacts that it offers to our citizens.”

This was posted at the official Facebook page of Municipal Board of the Serbian Progressive Party in Savski venac municipality, and during the pre-election campaign, as posted on social media, the residents of this municipality were also visited by Nela Kuburovic, the Minister of Justice.

This was the announcement before the speech given by Aleksandar Vucic at SNS rally in Batajnica (Zemun municipality) during the pre-election campaign on 11 February last year, and on the party rally, Aleksandar Vucic addressed the supporters not only as the first person of SNS party but also as the President of the country.

FOTO-GALLERY: During the election campaign, the information on activities of city officials as the part of the promotion of government results were published daily on the official City of Belgrade and Belgrade municipalities web portals.

Unlike this, the activities of city officials, most of all Goran Vesic and Sinisa Mali, were mostly reflected in the so-called hidden campaigning. Namely, the then Mayor and City Manager were so active in their work during the campaign and they had at least one activity every day, and we could read, hear and listen about it on official websites of municipalities and the City of Belgrade.

Every day they opened schools, visited green markets, fixed water supply pipes, installed public transport stops, changed dumpsters, decorated doors in residential buildings and other. All the time they were loudly and clearly underlining what the Belgrade government had done in the past four years.

In addition to Serbian Progressive Party, other parties have not refrained from it, including some opposition parties and movements that hold public office in Belgrade municipalities. So the electoral list Aleksandar Sapic, who is a President of the Municipality New Belgrade, promoted the list through municipal news bulletin, or used the premises of municipal administration as the headquarters of the campaign staff.

The abuse of office was visible in the similar situation as regards the electoral list “What do you think you are doing”. The candidate for Mayor and the President of Municipality Stari Grad Marko Bastac was regularly campaigning during his working hours.

In addition to the officials’ campaigning, the manner of communication also demonstrated the thin line between the party and the government. CRTA observers recorded that in large number of cases there was no difference between the news in social media of the municipalities, and/or City of Belgrade, and information from the electoral lists that hold office in the municipality, and/or the City. So the local government credits were then attributed to the party.

The Municipal Board of the Serbian Progressive Party in Obrenovac even reported from the sittings of the Municipal Council by saying: “Obrenovac City Assembly Council sitting was held today in local community Usce, because every part of Obrenovac is important to us and #BecauseWeLoveObrenovac”.

Serbian Progressive Party in Zemun underlined and commended the cooperation between municipal and city authorities during the large project of reconstructing the City Park in Zemun on their Twitter profile and casually added “Aleksandar Vucic – Because we love Belgrade!”

Several months following Belgrade elections, local elections were held in four municipalities in Serbia – Lucani, Doljevac, Kula and Kladovo, and active and open involvement of the public sector employees in the party promotion was also featured in this election campaign.

However, the ruling parties did not stop at using the public offices only, but for the purpose of the promotion they have used the public assets and public enterprise workers.

CRTA observation mission recorded several situations when the employees in public administration and public enterprises were used for the purpose of Serbian Progressive Party campaign.

For example, in Kula, SNS organised the opening of the Calzedonia factory that in its full capacity should hire “400 inhabitants of this municipality”.

The President of Serbia Aleksandar Vucic and the President of the Government of the Autonomous Province of Vojvodina Igor Mirovic were present at the factory opening. According to the information collected by CRTA observers, the employees from public administration and public enterprises in Kula were obliged to attend the factory opening, whilst the public enterprises directors had even received instructions on how many employees they should bring to the opening.

Despite the law strictly forbidding the use of public resources for the purpose of the political parties’ promotion, it did not stop the ruling party to hold the closing convention in the Sports Hall of Dragacevo High School in Guca.

Tamara Brankovic (CRTA) on why the misuse of public resources, as one of the most drastic phenomena, has an impact on the free and fair elections

It has been publicly recorded that Rados Milovanovic, the Director of Factory “Milan Blagojevic – Namenska“ a.d. had “advised” on who they should vote on the elections. On the recording shared by portal Insider it was recorded that he invited the workers gathered at the celebration to vote for Serbian Progressive Party.

Besides the fact that the director of this factory as the public official within the meaning of the Anti-Corruption Agency Law is forbidden to use public resources and conventions he is taking part in as well as the meetings he attends in his role of the official to promote political parties, this event also represents the influence on the free will of the voters who are unambiguously being told by their superior which voting option would be considered desirable.

Another case made a lot of noise during the local elections in December last year. Namely, just before the beginning of the election silence, on the official website of Kula municipality the invitation by Istvan Pastor, President of Alliance of Vojvodina Hungarians, was published when he invited people to vote for electoral list SVM and SNS.

Several months later in Lucani, Doljevac, Kula and Kladovo the practice of municipalities organising free programmes for their citizens more extensively than outside the election period could be witnessed just as in Belgrade elections.

So in their offer the municipal government in Kula had free field trips and Fruska Gora monasteries tours for the pensioners, theatre and cinema plays, but also health checks entitled “For more progressive health”, which was very straightforward and obvious.

Looking up to Belgrade elections, in other cities in Serbia which had local elections last year, free concerts of mainstream stars were extensively organised. This was done in public space, and concerts were promoted as “gifts” to citizens.

Several times, in Kula municipality Health Clinic in Ruski Krstur free health checks were organised named “For more progressive health”, which unambiguously suggested the citizens who should they vote for.

However, the most drastic example of misuse of public resources could be witnessed on the Election Day in Lucani.

CRTA observation mission came to this information by comparing the plates of the spotted cars and the licence plates of vehicles owned by public enterprises and institutions, and this was done on the basis of the Request for access to information of public importance.

FOTO-GALLERY: The vehicles owned by public enterprises and institutions which were spotted by CRTA observers outside of the polling stations on the day of the local elections in Lucani, 2018

Almost 200 vehicles from 34 different cities (not including the licence plates of Lucani), predominantly from Vojvodina, were detected by CRTA observes when they were visiting polling stations, driving voters to vote or serving as a disguise for maintaining the parallel voters records.

All vehicles were spotted mostly in front of the polling stations, whereas as the witnesses said, the persons in these vehicles communicated with voters and with polling station committees’ members.

For eight months now, the authorities did not answer the question what did vehicles belonging to the public enterprises from Novi Sad, Pancevo, Vrsac, Vrbas, Sid, Ivanjica (providing exclusively local services) had to do in Lucani during the elections by being exactly in front the of the polling stations.