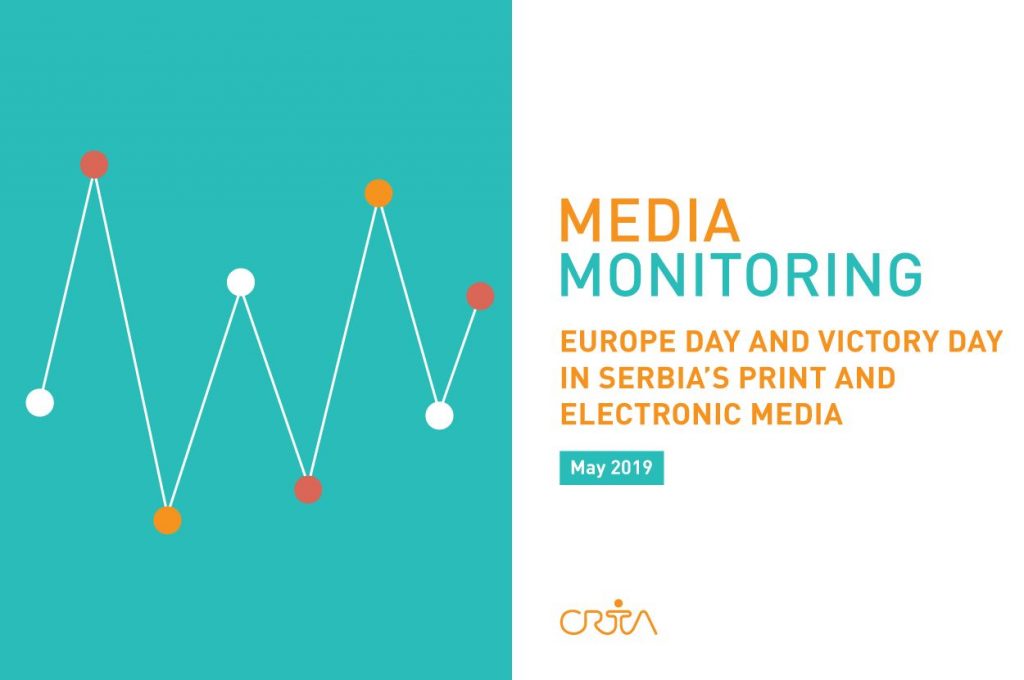 On the occasion of May 9, 2019 – Europe Day and Victory Day in Serbia, CRTA conducted monitoring of print media cover pages, and analyzed how national dailies and four central informative programs with national television frequency reported about developments related to this day. Media monitoring was focused on media reporting in the period May 7-11, regarding several central events in Serbia in this period:

Media reporting analysis was based on several indicators: tone of reporting about the event (positive, negative or neutral towards foreign actors), title of media report, number and tone of related photographs, importance/relevance of the column and size of articles.

Victory Day was much more covered by the media in comparison to the Europe Day. In print media, 90% of articles covered the Victory Day, in addition to 88% of media reports on TV channels with national frequency.

Through qualitative analysis of media content CRTA identified mainly positive orientation towards Russia in dailies and televisions reporting about military parades in Nis and Moscow. Articles glorified the military strength of Serbia and Russia, emphasizing the Serbian Army’s apparatus equipped with Russian weapons, often referred to as the greatest weapons in the world. These articles also pointed to the importance of Russia in the World War II and its efforts in fight against terrorism. Glorification of relations with Russia was recorded in media reporting about the “Immortal Regiment” march as well, referring to not only victims of the World War I and World War II, but to the victims of NATO bombing and wars in the recent Serbia’s history.

Europe Day, on the other hand, was neutrally presented, in a lower number of media (10% of media reports in print and 8% in electronic media) and in reports of much smaller size and length in comparison to those related to the Victory Day.

Text you are trying to reach is available only for subscribers.