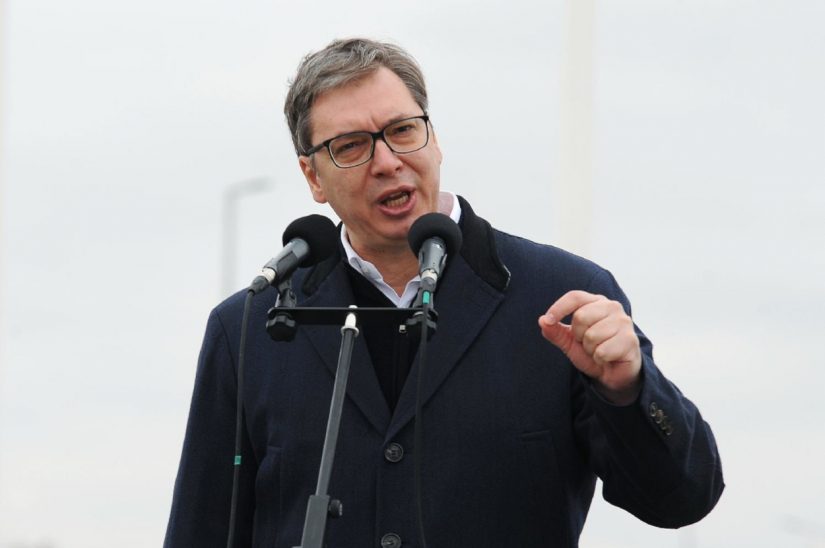 Those blocking the roads are doing it against the law

“The point is, let’s make it clear, those who block roads and streets are doing that against the law, and people should know that.”

The day of the electoral convention of the Serbian Progressive Party held in packed Belgrade Arena will be remembered for roadblocks around Serbia, incidents and arrests of citizens who took part in blockades.

As a sign of protest against the adoption of the Law on Referendum and Law on Expropriation, ecological activists and citizens blocked the roads in Belgrade, Novi Sad, Šabac, Požega, Zrenjanin, Valjevo, Kragujevac and Preljina for an entire hour.

The highway section at Belgrade Sava Centre was blocked, Duga Bridge in Novi Sad on which gendarmerie forces tried to break up the blockade, and the bridge in Šabac, where the incident broke out when the masked men used baseball bats, hammers and excavator against the citizens.

The competent authorities did not discover who were the men attacking citizens with bats and hammers driving black Škoda cars into the group of people after the conflict.

Moreover, police and authorities hold the citizens and blockade organisers accountable for the incidents.

‘Blocking roads is unconstitutional and illegal’. This was the main message repeated in unison by government and Serbian Progressive Party officials, along with their leader Aleksandar Vučić.

In his guest appearance on TV Pink, Vučić said that the organisers were “pure political criminals” since by blocking streets and roads, they were violating the elementary constitutional right of all citizens to have freedom of movement, including the excavator driver who drove into the citizens who were blocking the bridge in Šabac.

He emphasised that the organisers, among whom he listed movements Kreni-Promeni (Start the Change) and Ne davimo Beograd (Let us not sink Belgrade), Zajedno za Srbiju (Together for Serbia) and Ekološki ustanak (Ecological Revolt), had violated the Law on Public Gatherings, since they failed to submit the request for organising the gatherings.

“The point is, let’s make it clear, those who block roads and streets are doing that against the law, and people should know that”, Vučić said.

He read Article 39 of the Constitution, saying that everyone had the right to free movement in the Republic of Serbia, and this right might be restricted by the law if necessary for conducting criminal proceedings, protection of public order, prevention of spreading contagious diseases or defence of the Republic of Serbia.

There is nothing problematic about this statement by Vučić, only that the Serbian Progressive Party supported the violation of those laws in some situations or even violated the laws themselves.

The requests for progressive party rallies in Niš and Leskovac in December 2019 were never submitted. These rallies were organised as a sign of protest against the cover page of weekly NIN and Corax’s caricature in daily Danas, featuring President Vučić and a sniper gun. As reported by Južne vesti, the police confirmed that the progressive party supporters failed to submit requests for these rallies.

There are inconsistencies regarding roadblocks too. How else would one explain that blockades of ecological activists were illegal and unconstitutional, but at the same time, the several days of roadblocks near administrative border crossings Jarinje and Brnjak two months ago were a legitimate act of political fight? In September, Kosovo Serbs blocked artery roads because of the Kosovo reciprocity decision on issuing temporary registration plates for vehicles with
Serbian registration plates. According to media reports, some high officials of the Serbian List, a leading party of Kosovo Serbs, could be seen on the barricades. This party had unlimited support of President Aleksandar Vučić and Serbian Progressive Party.

Those responsible for setting up barricades on the artery road Zvečan-Kosovska Mitrovica were not characterised as “pure political criminals” nor accountable when in March 2018 in a place called Rudari, the Serbs from North of Kosovo blocked the traffic after the special forces of Kosovo Police ROSU had arrested Marko Djurić, the then director of the Office for Kosovo and Methoija, since he “entered Kosovo illegally”.

In February 2011, the then opposition Serbian Progressive Party organised a big rally in front of the National Assembly Hall, when they threatened they would stay in the streets unless the government called the early parliamentary elections in the next two months.

“Give us two months; this is how much we give them. If the bullies would not listen, as they did not so far, in April, you could find me here sitting on a styrene sheet to avoid catching a cold. You should bring some sheets too if you would like to join me”, said the then President of Serbian Progressive Party, Tomislav Nikolić, at the rally in Belgrade.

However, instead of blocking streets around Serbia by sitting on styrene sheets, the progressive party supporters opted for different radical tactics of a political fight outside institutions. To force early parliamentary elections, on 16 April, Tomislav Nikolić started a hunger strike immediately after the rally “Day for Change”. Because of the rally, which was properly reported, in addition to downtown streets, Branko Bridge was also closed, and the column of progressive party
supporters crossed the bridge, with Aleksandar Vučić at the front.

Although blocking roads is indeed unconstitutional and illegal, we saw that the Serbian Progressive Party had double standards about roadblocks, depending on who organised those, if the organisers were in opposition or government. Therefore, Aleksandar Vučić statement that those who block the roads and streets are breaking the law, we score as “inconsistent”.