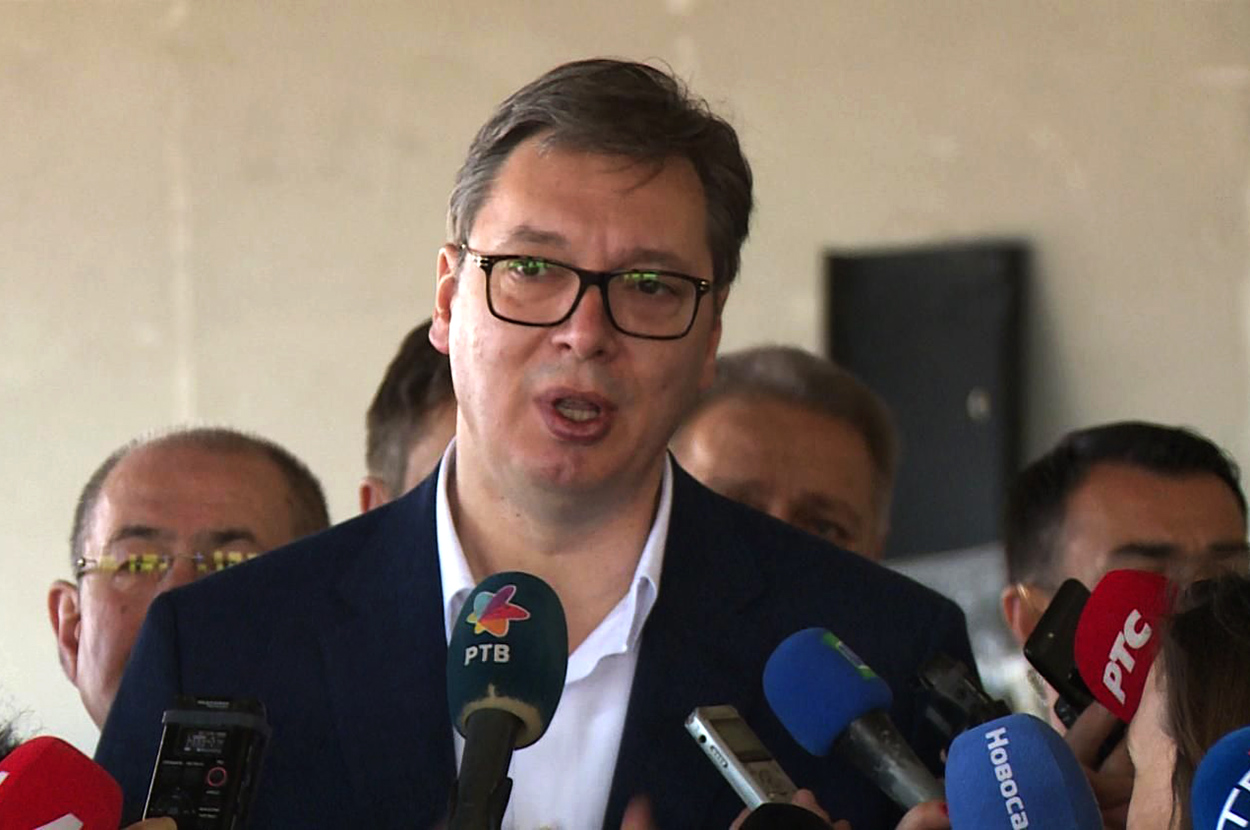 “Imagine how it would sound if some of us had said that Republic of Srpska and Serbia should be united, but we haven’t, nor they will.”

We already wrote about President Aleksandar Vučić guest appearance in the latest Hit tvit TV show when he talked about wearing protective masks on his party rally and roadblocks. In the same guest appearance, the President had to answer the question on the statements of Albin Kurti.

When answering the question of how would he vote on the referendum regarding the unification with Albania, the Prime Minister of Kosovo said:

“When you hear that Kosovo should join Albania and no one from the international community reacts to that, but they would react for sure if something like that originated from here, how would you respond”, TV Pink host asked.

Vučić admitted that he did not prepare for this question because he was not aware that Kosovo would be the topic, but he answered:

“Now, just think of it, it is indicative of Serbia’s position, but it is not a question if someone was in power, or for Aleksandar Vučić, it is showing their relationship towards Serbia, imagine if some of us had said they should unite, but we didn’t, and they wouldn’t – Republic of Srpska and Serbia”.

“I would like to ask – what would be their reaction? As the kids in Belgrade would say, they would act that instant. In the same second, they would explain to us that we are people of the past, the Balkan’s burden and that we introduce crises”, explained Vučić.

Could we be sure if the statements on the unification between the Republic of Srpska and Serbia were just an idea or representatives of both sides had publicly expressed their aspirations about the single state?

This year in April, Minister of Interior Aleksandar Vulin appeared as a guest on the TV show Hit tvit and said:

“I am not sure I understand why the borders are unchangeable. I do not understand why the Serbs could not unite. I am not sure why Serbs forming a single state will not solve a Serbian national question. Obviously, in the Balkans, the national questions are solved by the nation being united in a unique political structure. By forming a state. … Serbs should have a unique state, so a national question our ancestors were solving from the First Serbian Uprising should be solved in this way. This is my personal opinion, not Vučić’s, nor the Government.”

Member of the Presidency of Bosnia and Herzegovina Milorad Dodik was even more precise on the first celebration of the Day of Serbian Unity, Freedom and National Flag in Banja Luka, last year:

“We have two states, Serbia and Republic of Srpska, but we aspire to be a single state”.

On the same day, Vučić said in his appearance on TV Pink that this would be an imaginary scenario, Minister Vulin held a speech on the newly constructed bridge “Bratoljub” (English: “Kiss your brother”), between Bratunac and Ljubovija, and the integrated border crossing and customs terminal of Bosnia and Herzegovina and Serbia.

“Dear citizens of Serbia, dear citizens of the Republic of Srpska, may this bridge bring you joy. So, may God help you cross to both sides for a good cause and let’s remember – Drina is a border only as much as we want it to be. It divides us as much as we allow it to divide us, connecting us as much as we want. It has to be our connection since us we both hope for and love the same things, and we hope that the children you have brought in today, which I am infinitely grateful to you, would grow up in better times than we did”.

Besides emphasising that, “Drina is a border only as much as we want/decide it to be”, he also said that there was no excuse to create borders between people, and then he wished happiness to everyone who waited for six years for this bridge.

However, although Vulin asked no one to take him wrong or abuse his words this time, his earlier statement had the same message.

More than two and a half years ago, on the Day of celebrating the Army of Republic of Srpska, on 12 May 2019, Vulin stated:

Being a priority to the Serbian army, the Republic of Srpska was mentioned in the National Security Strategy of the Republic of Serbia, adopted at the end of December 2019 when Aleksandar Vulin was the head of the Ministry of Defence.

This year, the Day of Serbian Unity, Freedom and National Flag was celebrated on 15 September in Belgrade, and in his speech, Dodik said:

“We have our republic, but our homeland is Serbia, our country is not BiH, our country is Serbia. I am assured that as Serbs have suffered so much in the last century, this will be the century of our unification and our unity that will begin like this”.

President Vučić gave a broader perspective to the holiday:

“If we are united, us Serbs, this won’t be state holiday only, but an all-national and all-Serbian holiday, we can overcome all the difficulties”, said the President of Serbia Aleksandar Vučić.

A month after that, Aleksandar Vulin mentioned his opinion on Serbian unity.

“I firmly believe that creating of the “Serbian world” as a unique political nation is among the vital need of Serbs and this is not threatening”, he said during his speech in the National Assembly of Serbia.

Regarding the creation of a “Serbian world”, a journalist Tomislav Marković wrote for Al Jazeera:

“This specific architectural endeavour – building a “Serbian world” is made by disintegrating the neighbouring countries. Serbian policy is changing its actors, parties, suspects, governments and ministers, but the hegemonic matrix remains the same.”

***
As we can see, Aleksandar Vulin (as an official representing our country) and Milorad Dodik (as a representative of the Republic of Srpska) more than once said in public that Serbia and the Republic of Srpska should be united and become a unique state. Such aspirations are even formalised in a document saying, “Preservation of Republika of Srpska is one of the foreign policy priorities”.

Therefore, we can imagine that, under Vučić’s scenario, “some of us” could talk about unification with the Republic of Srpska. In addition to all abovementioned – for this statement, the President gets a score – false.