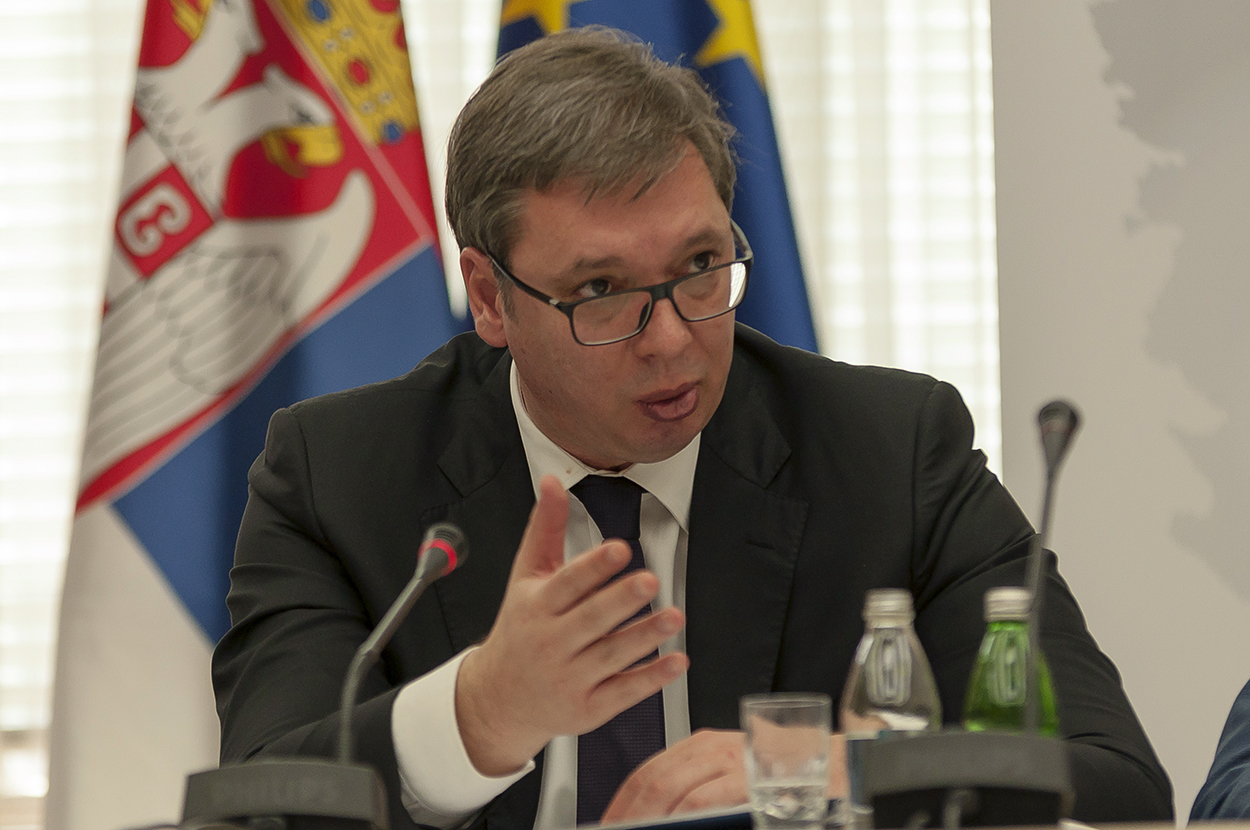 There is no mention of Serbia in Resolution 1244, but of FRY

“Resolution 1244 does not say anything about Serbia, it’s only about the Federal Republic of Yugoslavia.”

After six full years, Kosovo was again talked about in the Assembly of Serbia. Namely, although the Government of Serbia is obliged to regularly report to the Parliament on the course of the talks with Pristina, the last time they did so was in April 2013, and the curiosity is that the President of the Republic, Aleksandar Vucic, submitted the Kosovo report two days ago instead of the Prime Minister. Ergo, at a sitting which was not attended by the majority of opposition MPs, President Vucic spoke for almost two and a half hours, but we again did not hear his plan as regards Kosovo.

“Not because a serious plan to protect the interests of Serbia does not exist,” he explained, but because, as he said, we do not decide on anything ourselves.

“It doesn’t make sense for me to talk about the details, today I could have presented all plans, all maps, I could have talked about every village and hamlet, but I cannot and must not do that, because we do not decide on anything ourselves, the other party decides as well, but the ones that decide even more are the ones who encourage the other party to do everything they have been encouraged to do to date,” Vucic said.

If a compromise is reached with the Albanians, and he is sceptical that it will be, he again said that the citizens will decide on Kosovo in a referendum. We have again heard that Serbia has no authority in Kosovo, except in health and education systems, and that his intention is “to get as much as we can and to lose the least of what we have to lose”.

He pointed out that in 1999 we were defeated in an uneven conflict, that a partial political capitulation was signed, that our forces were withdrawn from Kosovo and Metohija and “that we pretended as if nothing had happened.” Then he also reminded of the United Nations Security Council Resolution 1244 (UNSC), saying that “there is no mention of Serbia in it, but only of the Federal Republic of Yugoslavia.”

“We renounce legal continuity in relation to the FRY, and then the Federal Republic of Yugoslavia disappears in 2006 owing to the irresponsible politics that we have been leading here,” Vucic said.

Such an interpretation of Resolution 1244, according to which it refers to the FRY, and not to Serbia, is not new and we had already heard it from the President of Serbia. Thus, last summer, approximately at the time when he publicly stated for the first time that he was advocating a demarcation with the Albanians, he had the answer for those who say that the solution for Kosovo must be in line with Resolution 1244.

“Do you know what it says in Resolution 1244? There is no mention of Serbia whatsoever. It refers to the Federal Republic of Yugoslavia. And did Vucic, or any of us destroy the FRY and let go of Montenegro, and gave Montenegro wings to leave the FRY? The first ones to do so in 2006 were Jeremic, Djilas, Tadic and others. I am asking you, people, whether this is the truth or not… Don’t make me tell to you what I explain to the Albanians when they tell me – it’s not Serbia, but the FRY. So I explain – that has legal continuity, and so on. I get by and I fight for my country, for my Serbia, everywhere,” Vucic said on 22 July 2018.

At that time, however, the Democratic Party, to whose former members he is now shifting responsibility for the separation of Montenegro, was not in the Serbian Government. The then Government, whose Prime Minister was Vojislav Kostunica, consisted of Democratic Party of Serbia (DSS), G17 plus, Serbian Renewal Movement (SPO) and New Serbia, while Boris Tadic was the President of Serbia. Vucic reiterated a similar thesis on the Resolution 1244 on 23 August last year, when opening a factory in Zrenjanin:

The fact is that the President did not lie when he said that there is no mention of Serbia in Resolution 1244, but FRY (Serbia and Montenegro), which is logical because the UN Security Council adopted this document on 10 June 1999 (its adoption marked the end of the NATO bombing of the FRY) .

Among other things, it states – that all United Nations Member States guarantee the sovereignty and territorial integrity of the FRY (Serbia and Montenegro), as defined by the Charter of the United Nations and the Helsinki Final Act.

That was not changed by the fact that on 4 February 2003, the Federal Republic of Yugoslavia was renamed into the State Union of Serbia and Montenegro, nor was it changed by the subsequent separation of Montenegro from that union, on 3 June 2006.

Namely, a referendum was held in Montenegro which then exercised its right to withdraw from the State Union based on the Law on the Implementation of the Constitutional Charter of the State Union of Serbia and Montenegro. In paragraph 5 of Article 60 of this Law, it is stipulated that: “the Member State that exercises the right of withdrawal does not inherit the right to international legal subjectivity, and all disputed issues shall be separately regulated between the successor state and the newly independent state.”

“Should Montenegro break away from the State Union of Serbia and Montenegro, the international documents relating to the Federal Republic of Yugoslavia, in particular UN Security Council Resolution 1244, would concern and apply in their entirety to the State of Serbia, being the successor. The Member State that exercises the right of withdrawal does not inherit the right to international legal subjectivity, and all disputed issues shall be separately regulated between the successor state and the newly independent state,” states Article 60, paragraph 4 of the Law on the Implementation of the Constitutional Charter of the State Union of Serbia and Montenegro.

Furthermore, after Montenegro’s withdrawal from the State Union, then Serbian President Boris Tadic informed the UN Secretary General Kofi Annan that “the membership of Serbia and Montenegro in the United Nations will be continued by the Republic of Serbia, since Montenegro on the same date declared independence “.

Serbia thus inherited membership in the United Nations, but also in other international institutions, including the Council of Europe, OSCE, Partnership for Peace, the BSEC (Black Sea Economic Cooperation) and CEFTA. On the other hand, the independent Republic of Montenegro became the 192nd member of the United Nations on 28 June 2006.

That Resolution 1244 for Serbia remained the most important international document as regards Kosovo, despite the fact the FRY is written in it, is confirmed by the still valid Resolution on the basic principles for political talks with the provisional institutions of self-government in Kosovo and Metohija, adopted by the Serbian Parliament in January 2013 at the proposal of the Government of Serbia, whose first vice-president was Aleksandar Vucic himself.

This resolution, which we would like to emphasize is still in force, apart from the Constitution of Serbia, refers specifically to Resolution 1244, so it is emphasized that “any solution, whether on a general or specific issue, on a temporary, transitional or final status of Kosovo and Metohija, on the position of Serbs in the Province or the protection of the Serbian religious and cultural heritage must be in accordance with the Constitution of the Republic of Serbia and the United Nations Security Council Resolution 1244.”

The same is mentioned in the still valid Political platform for talks with Pristina, which Dacic’s and Vucic’s Government unanimously adopted on 9 January 2013, on the proposal of the then Serbian President Tomislav Nikolic. Since in its official documents the state of Serbia refers to Resolution 1244, which guarantees the sovereignty and territorial integrity of the Federal Republic of Yugoslavia (Serbia and Montenegro), and that its successor is Serbia, hence the interpretation that the division and demarcation are contrary not only to the Constitution, but also to Resolution 1244.

So, it is true that Resolution 1244 does not mention Serbia but the FRY, as President Aleksandar Vucic says. However, formally and legally, this does not change things, since after the withdrawal of Montenegro from the State Union in 2006, Serbia assumed the state and legal continuity of the State Union and became its successor in international institutions, in accordance with the Constitutional Charter of Serbia and Montenegro. Serbia then inherited membership in the United Nations, whereas international documents relating to FRY, including Resolution 1244, automatically continued to apply to Serbia as its successor. Therefore, as for the fact-checks we are to evaluate, Aleksandar Vucic receives “abuse of facts“.

It is true that Vucic still showed some consistency when it comes to Resolution 1244, since after its adoption in 1999, he said that it did not mention the sovereignty of Serbia, but of the FRY. Only then he did not transfer responsibility for the loss of sovereignty to Jeremic, Tadic and Djilas, but to the regime of Slobodan Milosevic, although in the very 1999 he was the Minister of Information in the Government of Serbia.

“Sovereignty is not preserved! It is totally meaningless to lie to the people and say that we have preserved the sovereignty of that territory. People are not stupid. People know very well that there is no “S” of sovereignty. Today’s key problem is that some people in politics and some people in the media think that it is very nice and very clever to lie to the people, tell them fairy tales, tell them fictions, talk about how beautiful the state is in the country, how they are all thrilled, how they all rejoice… All this does not exist, this is all nonsense. This platitude and empty talk of sovereignty does not exist anywhere, except that it is only mentioned once in the UN Security Council Resolution, but not the sovereignty of the Republic of Serbia, but the FRY,” said Aleksandar Vucic, the then Minister of Information, for the “Svedok” on 6 July 1999.

However, although due to the acceptance of the proposal by Martti Ahtisaari and Chernomirdin on the withdrawal of the Yugoslav Army from Kosovo, resignations were submitted to the Government of Serbia by two vice-presidents and 13 SRS ministers, including Vucic, Radicals were still left with functions. Their functions in the Government were preserved by the then President of Serbia, Milan Milutinovic, who, using constitutional powers in a state of war, passed a regulation requiring the continuity of the composition and work of the government.