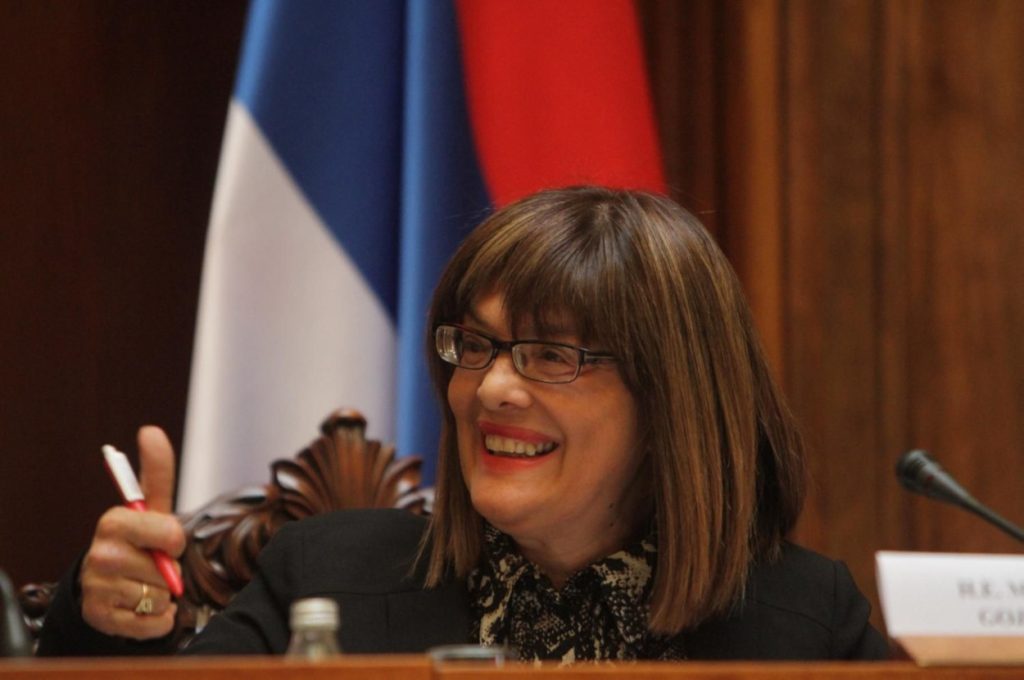 “Precisely 35 MPs occasionally do not want to participate in one part of the National Assembly of the Republic of Serbia work.”

On 13 April, during the protest “All for one – One in five million” in Belgrade, the demands were announced for establishing joint commission between the government and the opposition for defining fair and honest electoral circumstances, election of the new composition of Regulatory Authority of Electronic Media (REM) and appointment of technical and editorial team of RTS and RTV, and on the next day the Speaker of the National Assembly Maja Gojkovic said it is not true there is no dialogue between government and the opposition in the Parliament.

In her RTS guest appearance, Gojkovic had said that the dialogue is alive and existing between parliamentary groups supporting the Government of Serbia and “a larger part of the opposition participating in the work of Parliament”, and then she added:

“For sure a lot of noise is made because precisely 35 MPs occasionally do not want to participate in one part of the National Assembly of the Republic of Serbia work, which is definitely neither the boycott of the Assembly work, nor the sign of the lack of dialogue between MPs and parliamentary groups supporting the work of Government and those who call themselves the opposition.”

However, is it definitely true that 35 opposition MPs boycott the work of Parliament or as Maja Gojkovic puts it “occasionally do not want to participate in one part of the National Assembly work”?

Organisation CRTA made a survey in March this year which revealed that during last month plenary debates in the Assembly the majority of MPs from the opposition were absent due to the opposition boycott which had started at the beginning of this year. The majority of opposition MPs also continued their work outside of the plenum, organising press conferences as a particular “parallel Parliament” when they discussed law proposals which are in the legislative procedure, also presenting their amendments and informing citizens on the latest developments.

From their questionnaire for MPs, CRTA got different numbers than those mentioned by the Speaker of the Parliament when she discussed the number of MPs who do not participate in one part of the Assembly work. Namely, this organisation survey demonstrated that since February this year, 55 out of 88 MPs outside of the ruling majority participated in the parliamentary boycott, including both plenary sittings and/or sittings of the Assembly Committees boycott.

On the other hand, a total of 33 MPs outside of the ruling majority regularly participate in the work of the Parliament. These are MPs from the Serbian Radical Party, several MPs from LDP-LSV-SDA group and some MPs who do not belong to parliamentary groups.

Quoting their reasons to join the boycott, the MPs mentioned their dissatisfaction with the work of Parliament, democratic deficit, abuse and violation of parliamentary procedures, solidarity with other MPs but also solidarity with citizens who have been protesting in the streets of Serbia for months.

However, the MPs do not share an equal portion of enthusiasm concerning the efficiency of the boycott in fighting against democratic deficit although they participate in the boycott of Parliament, as it was mentioned in CRTA survey. Namely, some believe that inciting dialogue with the ruling majority is an efficient path for a democracy to come back to the institutions, but other MPs advocate a more radical approach to boycott, such as all opposition MPs giving up their parliamentary seats.

Therefore, as we could have witnessed from CRTA survey, it is not true that the majority of opposition participated in the work of Parliament, as the Speaker of the National Assembly of Serbia had said. The opposite is true – the majority of opposition MPs boycotted the plenary sittings and/or sittings of the Assembly Committees. In addition, there are 55 out of 88 MPs outside of the ruling majority participating in the parliamentary boycott, and not 35 MPs as the Speaker of the Assembly had claimed. Because of what she had said that “precisely 35 MPs occasionally do not want to participate in one part of the National Assembly work”, Maja Gojkovic’s statement was evaluated as “false”.