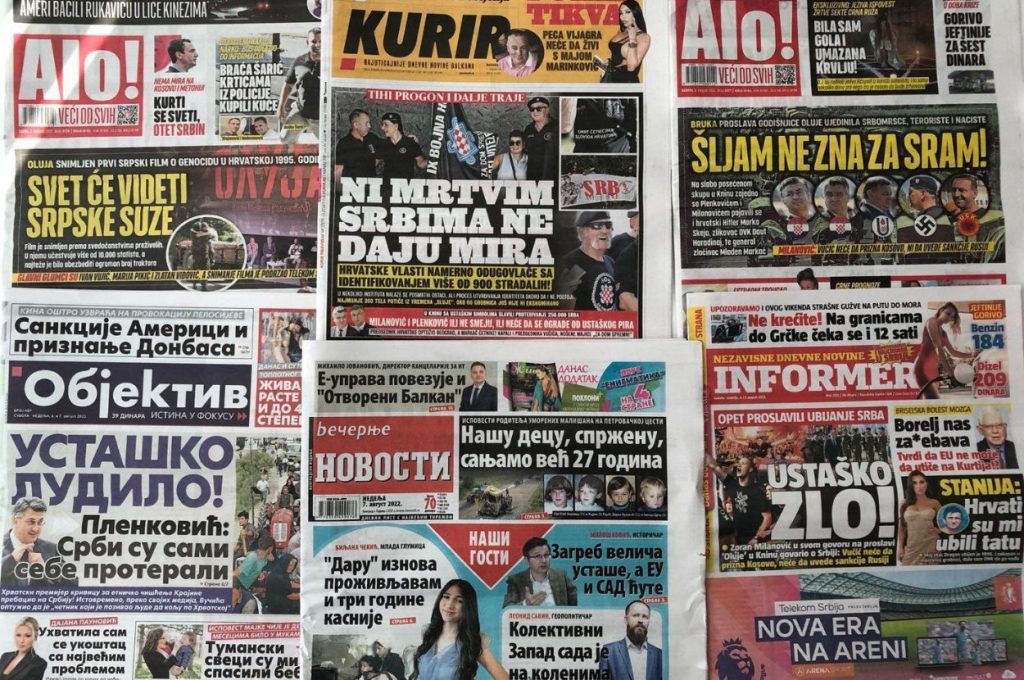 The Media on Operation Storm – Harrowing Memory or Warmongering?

Had someone been in a coma or on a long journey and found themselves in Serbia at the beginning of August 2022, they would rightly be confused – is this 1945 or 1995? Has the war against Croatia just ended, or is it just getting started? The front pages of pro-regime tabloids in those few days were brimming with reminders of the crimes against Serbs, those that happened in Jasenovac, as well as those that happened during Operation Storm, which would not be excessively strange, if it were not exaggerated to the point of absurdity. Gruesome details (often unprovable), gruesome photos and an unabashed war-mongering narrative towards Croatia here and now, triggered an anxiety that our country has some plans that it has not informed its citizens about.

The claim that the Croats hate us, and that one should never holiday on their coast, was avoidable only by getting your news from a single newspaper, or staying away from newspapers altogether, and by every means avoiding television channels with news shows. Some wondered what the intention of the tabloid editors could be, whether they have a common newsroom meeting where they choose the same topics and the same headlines so that no one escapes their idea of shaping public opinion. We know that the journalistic code does not have a strong hold on their decisions, because we are talking about the same daily newspaper that broke the code countless times, yet subsequently were still awarded the major portion of public financing allocated to the media.

Our Victims and Theirs

The war and the remembrance of the victims of Jasenovac in the tabloids get amplified mostly between 11 July and 5 August, in order to plaster thousands of “our” victims over thousands of “their” victims. For years, the Serbian government has been trying to ensure that its citizens endure various stressful reminders every summer, so that they do not accidentally realise that the war criminals from Srebrenica have a first and last name. No, the state will not allow you to raise your head, you must think of victims amongst our own people, because if you are not contrite enough, if you believe that Dara of Jasenovac might have been less explicit, if you dislike the contrived play about Operation Storm in which the woman in her forties wears a scarf on her head like an old woman, and acting is at the level of an elementary school play, or if you happen to think that the rally in Novi Sad was a rally of the Serbian Progressive Party – you will as a matter of course be declared a traitor.

There is no official data on the number of displaced and killed in Operation Storm in 1995, but according to the data of the Humanitarian Law Center, around 200,000 Serbs were forcibly displaced, while around 400 were killed. A lot is known about this crime in Serbia, footage has been shown, shocking testimonies have been written, personal stories have been told, we have witnessed the trials – and the release – of the criminals. Every adult resident of Serbia has heard at least one personal story about Operation Storm. However, the current government persistently repeats that neither Operation Storm nor the Ustaša’s Jasenovac camp were allowed to be mentioned in Serbia until Aleksandar Vučić came to power. Thus, the day in which the people of Krajina gathered in the Church of St. Mark to remember their dead and remind us of the sad refugee fate, turned into a kind of kitsch parade in downtown Novi Sad, where citizens in hundreds were bussed in, many of them having no connection to Operation Storm or any interest in it. Of course, not a mention of Aleksandar Vučić’s speech in Glina, when before Storm he told the same population that they would emerge victorious, just as he has now reiterated.

Preparations a Day or Two in Advance, from Periodical Columns to Ustaša

The tabloids stated preparing for the event on 4 August the day before, (maybe even earlier, but they had to talk about the new “war in Kosovo”, all in unison), and their common heading above the title was now (as if on command) “Crime without Punishment”. The goal is to repeat at all times that “Croatia is celebrating, while Serbia is grieving!” over a couple of days (while the crisis surrounding the new documents has not completely subsided in Kosovo, and while fake news about the beginning of armed conflict in the province continues to be transmitted).

The announcements had already started on 3 August. The tabloid Objektiv announced a special supplement for 4 August, marking the 27th anniversary of Operation Storm with the title “The Genocide against Serbs in the Krajina Must Never be Forgotten”, and Alo announced that the filming of the movie Storm had been completed with an announcement stating: “The World will see Serbian Tears”. Novosti printed a title on a quarter of a page: “One Century, Two Golgothas” ahead of the 27th anniversary of Operation Storm as the announcement of a detailed account on pages 4 and 5.

And on the day of the official ceremony, where Aleksandar Vučić by now has a traditional address, the rhetoric intensified. The daily newspaper Informer “kills two birds with one stone”: “Five thousand Serbs are vacationing in Croatia, while the Ustaša are celebrating the slaughter of Serbs!”, all while asking how this is possible and offering reports from travel agencies that during the summer season, as many as 30,000 people from Serbia are in Croatia. Novosti does not take any risks, but devotes the entire front page to Operation Storm – they were, as they write, with the Serbs in Knin who are “fighting not to be completely erased from past and present”, with a woman repatriated to Croatia who says: “Hearths and graves are sacred to us” (because it is common knowledge that only houses and apartments in Kosovo and Croatia must be referred to as hearths, even if they are in an apartment building). Most of the front page, however, is dedicated to Jasenovac, with photos of starving children from the death camp. Because Novosti persistently forces you to think of those two crimes as strictly linked together.

Srpski Telegraf goes one step further. On the anniversary of Operation Storm, this daily published the testimony of a man who survived Jasenovac and who declares: “The Ustaša stuffed live children into coffins”, so since neither that nor photos of horror are enough for them, they write “they scratched the coffins with their fingernails fighting for their life”. All this in capital letters, so that even if you have no intention of buying a copy of Srpski Telegraf – you get the message passing by a newsstand.

This time round, the front page of Kurir delivered the testimony of a boy who has become a symbol of the stream of people leaving Croatia since, at the age of only 11, he transported the whole family from Banija to safety on a tractor. Alo was relatively restrained on the very day, 4 August, they also published the testimony of Miloš Degenek, the boy from the refugee column, with the statement: “Operation Storm Must Not Happen Again”. Politika announced on its front pages “that the campaign against our country is still not subsiding in Zagreb” illustrated with a photo of Aleksandar Vučić and the title “Media Frenzy in the Service of Revisionist History.” Blic, on the other hand, wondered: “Is Reconciliation Possible?”

After the Rally in Novi Sad – Everything has become Amplified

If until the very event in Novi Sad, where thousands of people came to mark the anniversary of the martyrdom, the newspapers were still thinking about what position to take, after the speech of the president of the country and after the entire program, which was quite debatable artistically – everyone knew what they were expected to do.

The headlines on 5 August abounded with quotes and subsequent revelations. Srpski Telegraf said that the secret has been hidden for 27 years: “Clinton, Tuđman and the Pope prepared Operation Storm”, claiming that there are documents and testimonies. And Novosti suddenly learned how Belgrade tried to defend Knin and how Slobodan Milošević asked Knin to hold out for 48 hours. Large title: “Just Don’t Forbid us to Remember” and a quote from Vučić: “Serbia will not give up its dead and its name”, without explaining who is asking us to do so.

For Objektiv, the main news that day was the statement of the president of the country: “We will defend Serbia and we will win”, while in Alo: “We mourn and bear witness to the crimes.” It is news to Politika, apart from what Vučić said, of course, that “Operation Storm and Jasenovac are not a myth”, because apparently everyone thought they were a myth, until the president told them that they were not.

Informer includes Europe and asks: “Is the killing of Serbs a state holiday?”, with assessments that Europe is hypocritical and that “their mouths are full of Srebrenica, and they don’t even mention Operation Storm and the Serbian children who were killed.” Informer also wrote about the boy from the tractor, but with a different tone: “Dead bodies are everywhere, and I’m driving a tractor and pretending not to see.”

Kurir again, somewhat conciliatory: “When Sadness Creeps into the Soul”, a report from Knin with the words of one of the exiles saying he does not hate those who forced him to leave, because he thinks they did not know what they were doing.

There is no Stopping

Then the new editions were published, some in the format of weekend editions, in which everything simply continued. We underline only the most noticeable front pages.

Novosti on Saturday: “Croatian Madness at Operation Storm Celebration, Serbs Forced Themselves Out”

Novosti on Sunday: “We have been having Nightmares of Our Children Burnt to Death for 27 Years”

Informer: “Ustaša Evil, Once Again Celebrating the Killing of Serbs”

Srpski Telegraf on Saturday: “What is Hidden Behind Hate Speech? This is Why Croats Want Vučić Dead”

Kurir: “Silent Persecution Continues”, “No Peace for Dead Serbs Either”

Truth be told, all these dailies had a hidden front page, because they all published an advertising announcement for the start of the Premier League on the cover.

On Monday 8 August, Objektiv carried on, albeit in the corner of the front page, publishing the headline: “Singers who Glorify Operation Storm should be Banned from Entering Serbia”. However, the others had already moved on to stories covering consultations on the new Government. Until the next appropriate anniversary that should move us, but only after the front pages have explained it to us, since it would have remained unknown to the populace had it not been for the brave state leadership.