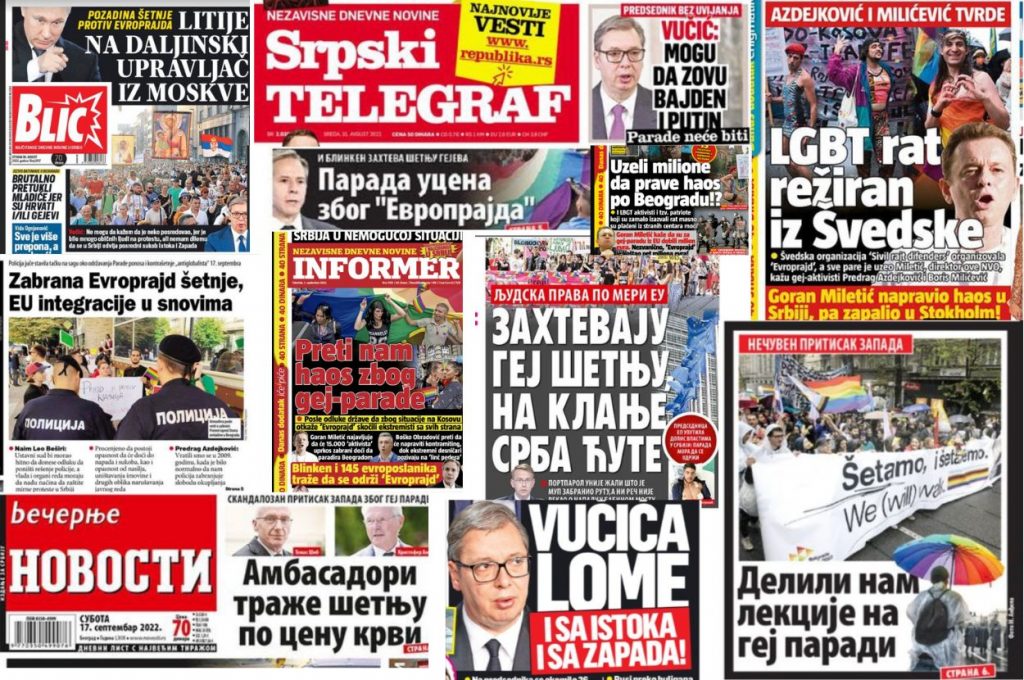 Opting neither for the East nor for the West, but to Stay in Power

After 17 September, the position of the LGBTI+ community has not improved, nor have the self-proclaimed defenders of family values attained their goal. The media declared the current Government of Serbia as the winner of the drama directed by the very Government that, while promulgating a neutral Serbian Bloc, has as Prime Minister a member of the LGBTI+ community starting her third consecutive mandate.

“Vučić crushed by both the East and the West,” “EuroPride is a hybrid war against Serbia,” “Litany procession remotely controlled from Moscow,” “America pushing us into the LGBT war,” “EuroPride – a difficult test for Vučić and the country,” – these are some of the headlines used by national newspapers on their front pages to announce articles about EuroPride and rallies against this event.

At a time when war is being waged in Ukraine (and Serbia remains the only European country besides Belarus not to impose sanctions on Russia), when the problems with Kosovo are threatening to escalate, Belgrade’s EuroPride became a battleground between the East and West – at least, that is what the most widely read national newspapers claim. If you listen to them, it was all about riding Serbia’s back, and specifically that of Aleksandar Vučić.

In the days before, during, and after EuroPride, the most widely read national newspapers (mostly close to the Government) represented the LGBTI community and litany procession participants (“litanists”) as two extremes working for foreign interests – the former for the West, the latter for Russia. The “brave, wise and independent” Serbian government does not listen to either, leading “Serbian policy” – without explaining exactly what benefit this policy brings to Serbia when advocating in favor of everything contrary to the views of the EU, which Serbia supposedly aspires to join. Since the pro-government media has for years been fueling the view that spies come exclusively from the West, and that opposition politicians are mercenaries, while support, friendship and shared values come from the East, i.e., from Russia, EuroPride conveniently confirms this thesis.

Conflict between the East and West, from Vučić to the front pages

This kind of picture was first painted, as always, by the President of the country – Aleksandar Vučić – who said that there are two extreme segments that are becoming stronger, and that in these circumstances normal, decent Serbia people remain silent and watch what the state is doing, hoping it has the power to stand up to them, alone against all.

“Some would just march at all costs, to oppose those others who would allow themselves the right to march always and at every moment, while never allowing others the same right. And what is rational about it? We have pleaded, saying that we have countless problems with Kosovo and Metohija; some said: ‘This is as important as Kosovo and Metohija.’ Is Kosovo as unimportant to you as whether some people would be having a march or not? That’s a sad truth if it’s the case,” Vučić emphasized.

In an interview for Reuters, Vučić tried to explain the complicated situation in the streets of Belgrade, the day after the “Litany Procession for the Salvation of Serbia” took place on 28 August.

“In Serbia, through political actors, through the non-governmental sector on both of the opposing sides, through the media, through various social groups, you literally have a proxy war of great powers, and you see it in the streets every day,” Vučić said, and Reuters reported that this statement comes after a protest against holding EuroPride, where those gathered waved Russian flags and posters showing the Russian President, Vladimir Putin.

Following a well-established practice, the most widely read newspapers parroted this. In other words, the statement from this interview appeared across the front page of Blic on 30 August, claiming that President Vučić had no dilemma that an indirect conflict between the East and West was unfolding in Serbia. The front-page photo of Vladimir Putin was next to a headline reading: “Behind the scenes of the march against EuroPride, the litany procession remotely controlled from Moscow.” 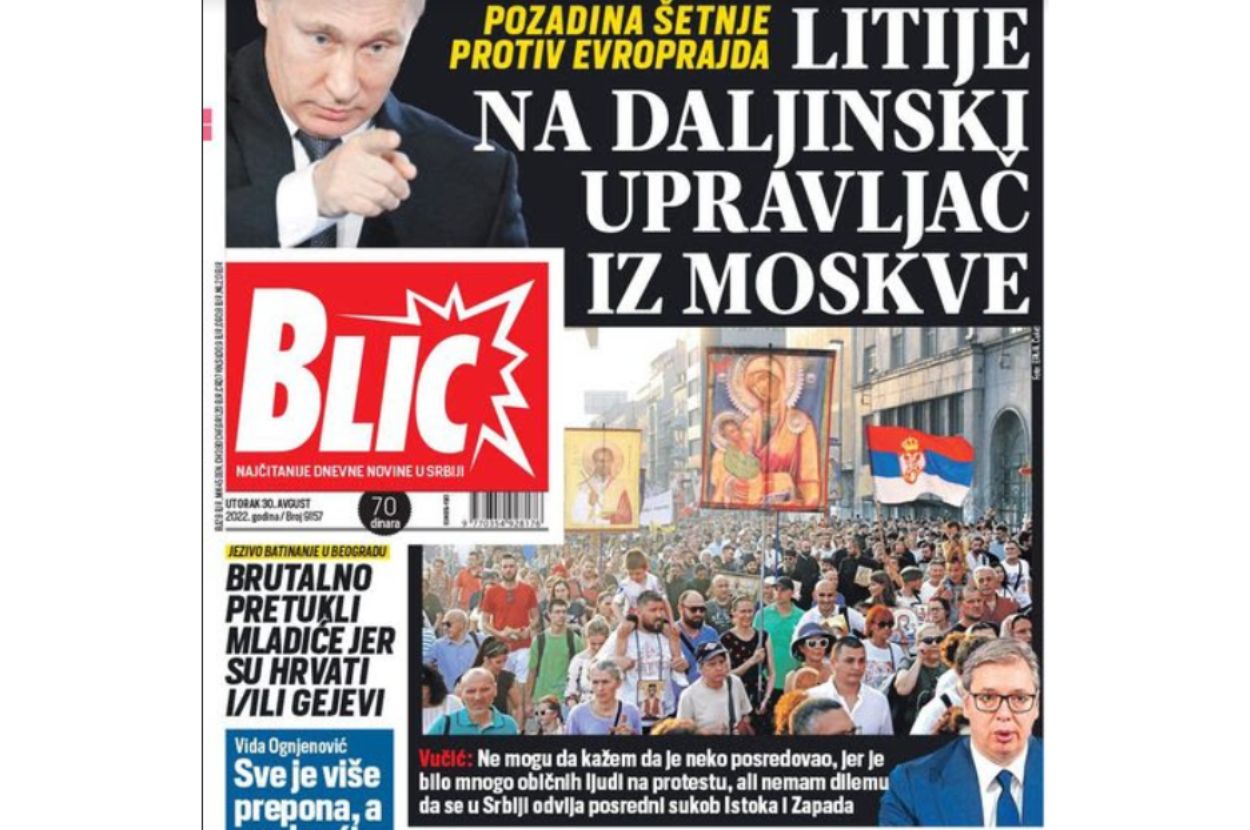 At the litany procession, the public got an indication of the link between this protest and Russia, because, as Danas writes, at the helm of the procession were the pro-Russian biker group, the Night Wolves, and Bishop Nikanor in his addresses referred to the exemplary attitude of Vladimir Putin towards the gay community.

Support to Serbia from Moscow

“Our brothers in the Balkans are in trouble again! They are severely oppressed and pushed out of Kosovo, and non-traditional values that are foreign to this Orthodox country are imposed on Serbia itself. This is our duty – the Serbs were the first to support Russia at the beginning of the New World War, when almost all of Europe was already against our country, and tens of thousands took to the streets as a sign of solidarity,” Informer reported the organizer’s announcement.

Neither Biden, nor Putin, nor Zelensky, nor Erdogan

In his media address, Aleksandar Vučić  explained that the state measures not once or twice, but countless times before it cuts, but that once a decision is made, then it is final.

On the last day of August, part of the front pages of Srpski Telegraf, Večernje Novosti and the newspaper Alo carried this statement.

On the first day of September, the month in which EuroPride activities take place, Večernje Novosti pointed out that Anthony Blinken, US Secretary of State, had demanded a “gay parade” be held, with the headline: “Parade of blackmails because of EuroPride,” and on the same day the front page  of Informer announced yet more chaos, this time caused by the gay parade, emphasizing that Blinken and 145 members of the European Parliament were asking for EuroPride to be held. 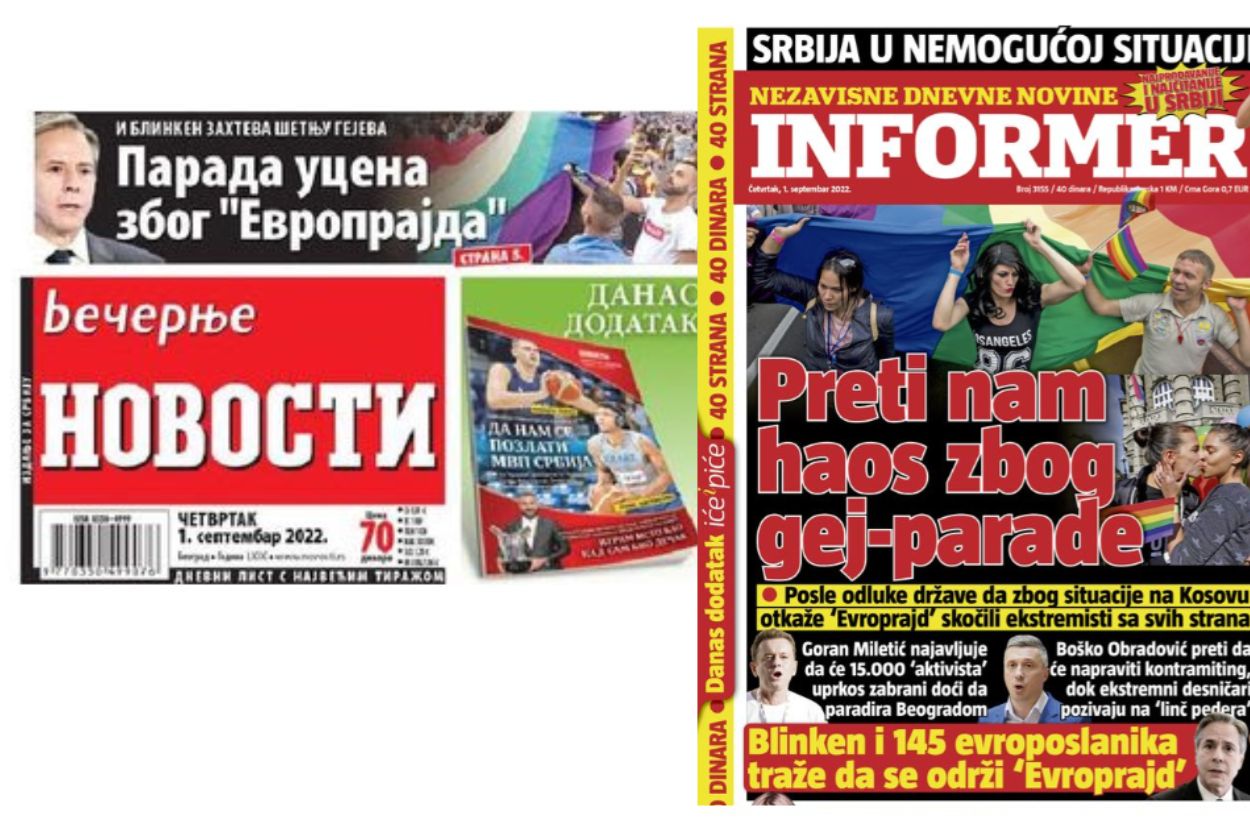 Radio Free Europe published the following text that day: “Putin celebrated and LGBT threatened in the ranks of the SPC,” with the cover photo from the rally against EuroPride showing posters of Vladimir Putin and Draža Mihailović (TN. leader of the Chetnik Detachments of the Yugoslav Army, a royalist and nationalist movement and guerrilla force established following the German invasion of Yugoslavia in 1941).

Serbs defend family, stronger than the pressures of the West

Another “Litany Procession for the Salvation of the Family” was held on 11 September, and Srbin Info portal clarified that the Serbs were defending the family and Kosovo and Metohija.

“Against holding the globalist gay parade project, against the betrayal of Kosmet and against the occupation of Serbia by the West,” read the text.

The President’s father, Anđelko Vučić, was also present at this protest.

In its article covering this event, Srbin Info reported that this was “the highest turn-out for a litany procession so far,” and the Sputnik portal reported on this event in an article entitled: “Rebellion and revolt in Serbia are growing stronger than pressure and threats from the West to hold LGBT parade /video/“.

According to the videos and claims of the participants at the protest against EuroPride, several-hundred-meter-long Serbian and Russian flags were unfurled.

EuroPride ban, human rights according to the EU

On 13 September, just four days before the EuroPride parade, the Ministry of Internal Affairs of Serbia issued an announcement in which it stated that neither EuroPride participants nor anti-globalists would be allowed to organize a march.

“After the security assessment, it has been determined that there is a high risk that the safety of the participants of both marches along the announced routes would be endangered, as well as the safety of other citizens,” the MOI statement read.

This decision of the Serbian authorities elicited  reactions from European officials, but also brought about a fresh series of articles in the press. 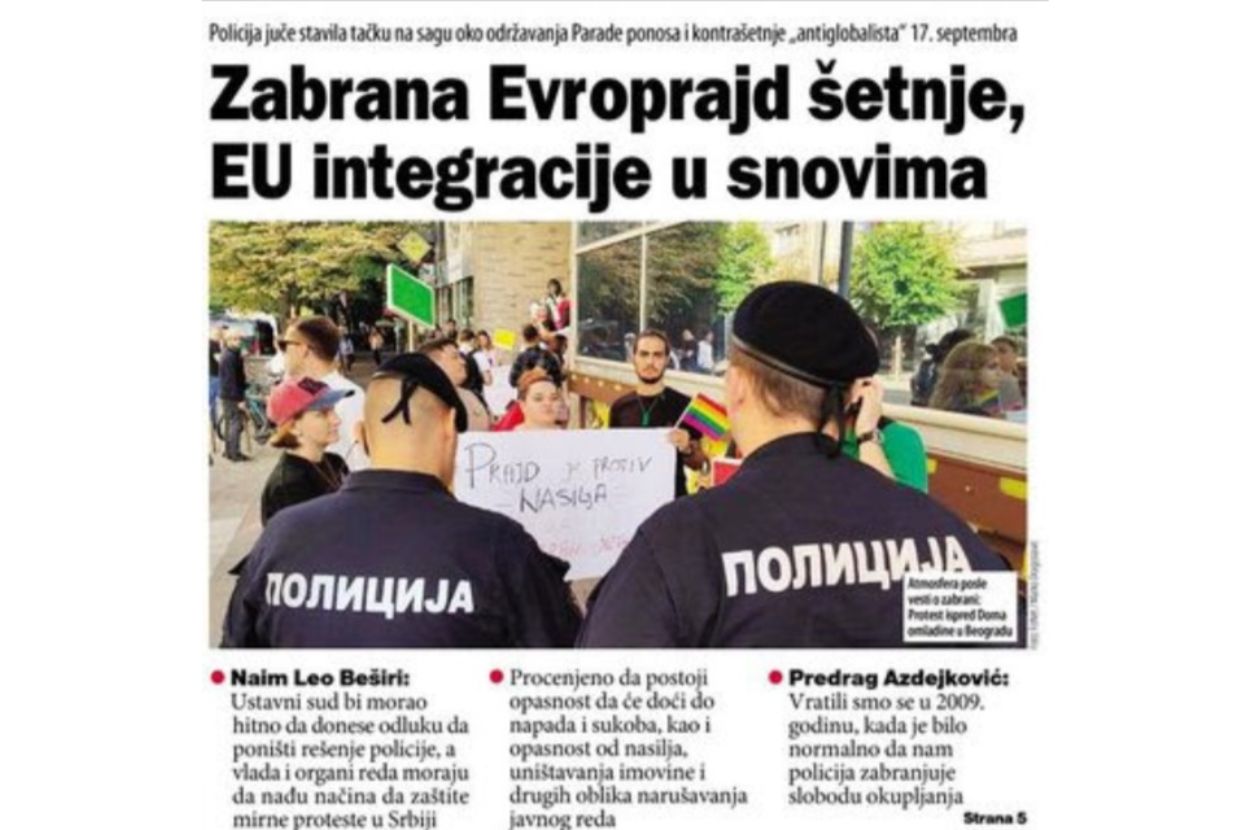 The front page of Večernje Novosti featured the text: “Human rights according to the EU: demand gay parade, remain silent on the slaughter of Serbs.” 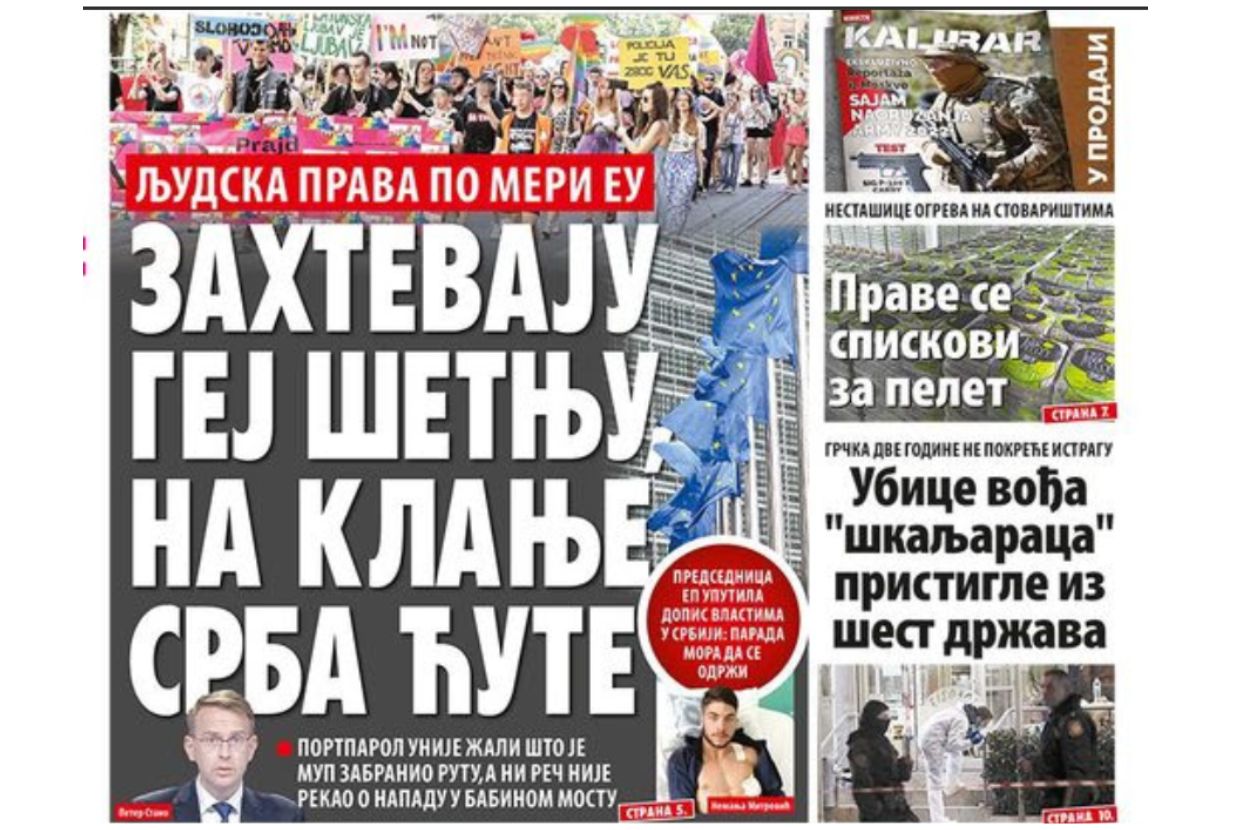 Informer, on the other hand, focused on America. 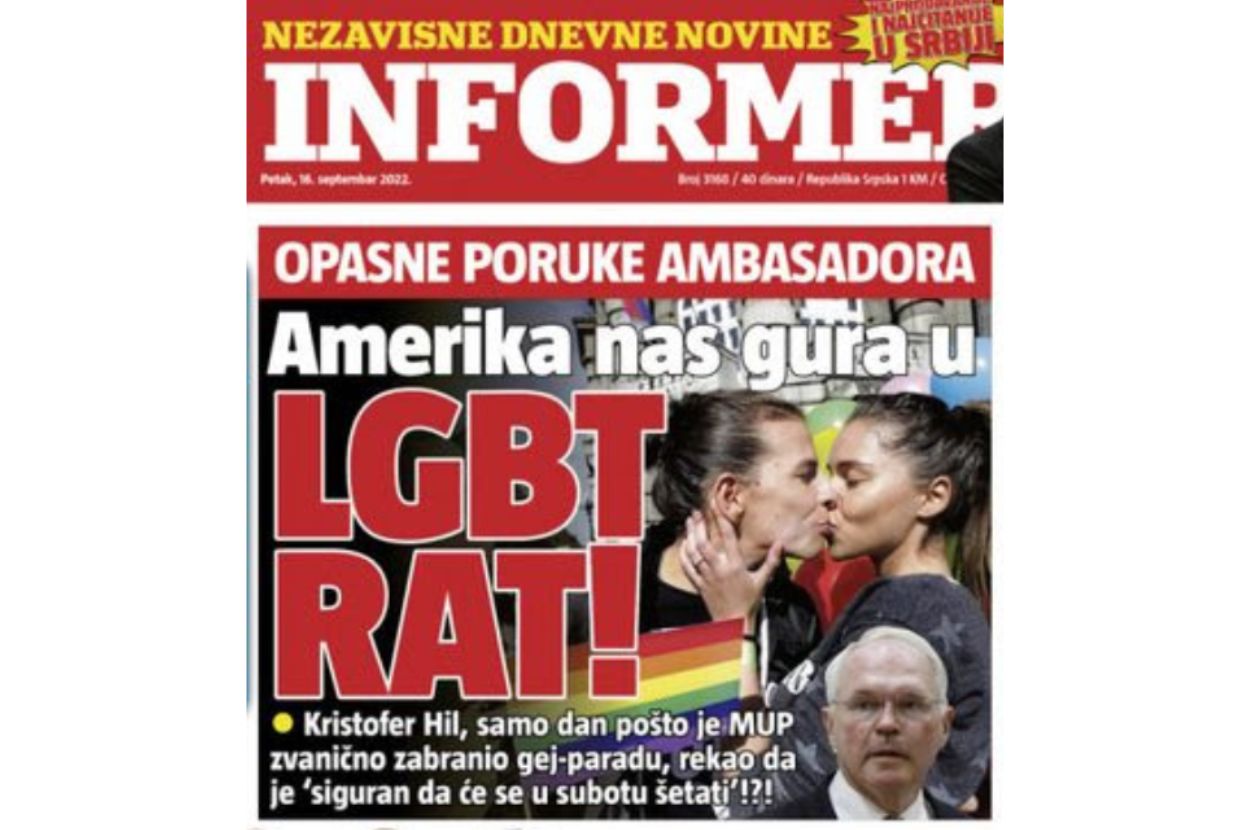 Sputnik then wrote that it was a lie of the ruling globalist elites in the West that Russia was behind the EuroPride ban in Serbia, and joined the tabloid announced chaos.

“The Serbian people do not fit into the infernal plan of the West: accusing Russia, and preparing chaos in Belgrade,” read the headline text, the day before the march.

They marched, they did not march

On the day of the parade as part of EuroPride week, the headlines were about the “hybrid war” between the East and West. Politika wrote about exactly that, Novosti singled out the ambassadors, while Alo told both the West and the East to keep their “paws off Serbia”. 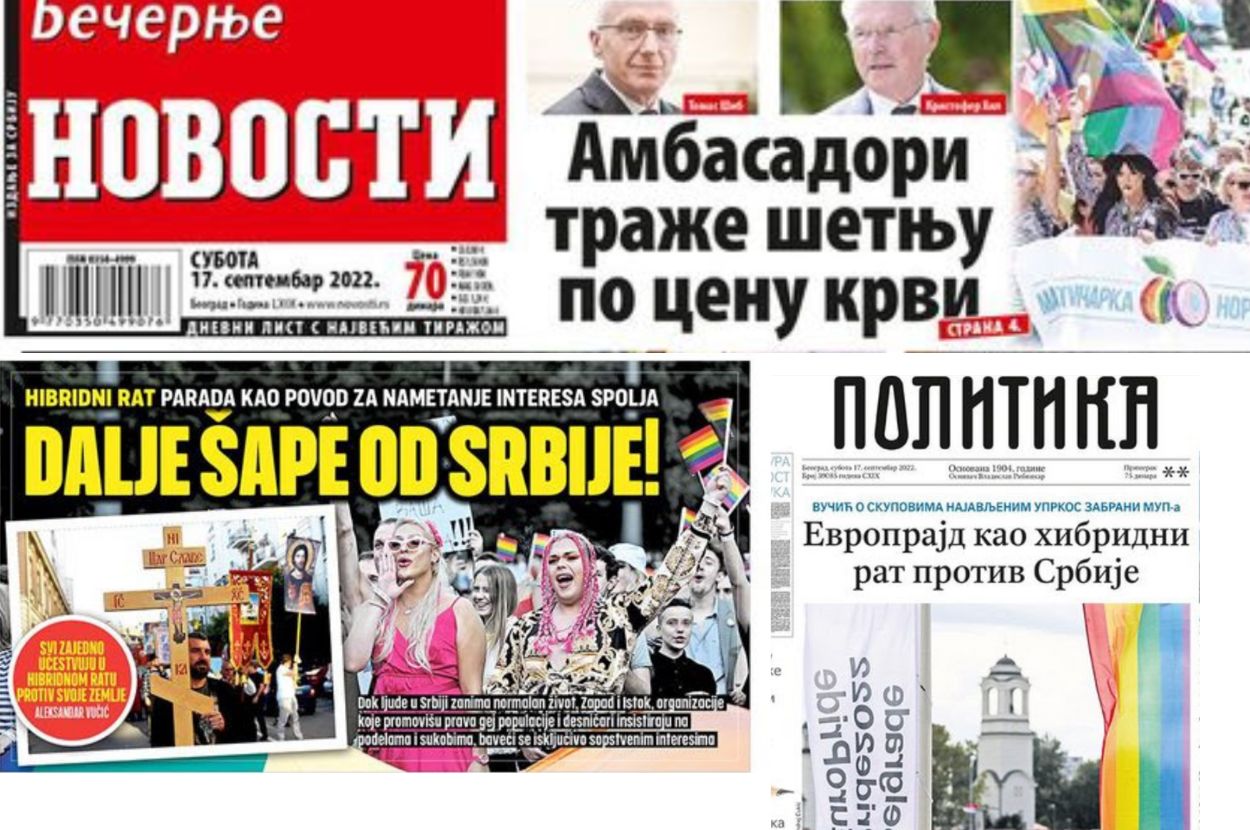 Depending on who you ask and what media you read, you can conclude that the march did happen or that there was no Pride parade on the streets of Belgrade.

After EuroPride, Informer focused on the organizational and funding aspects. In fact, it wrote on 19 September about millions received from the EU to create chaos in Belgrade, while on 20 September, Informer’s front page informed its readers that the funds had come from Sweden.

While Informer made calculations on who earned how much, Večernje Novosti continued to write about the pressure from the West, and its front page after EuroPride highlighted that unprecedented pressure from the West. The Novosti desk’s text asserted that “Western diplomats trampled on diplomacy with unscrupulous pressure,” that the rally was also used to support Ukraine, and that the “fake state of Kosovo was cheered in the Albanian language.” 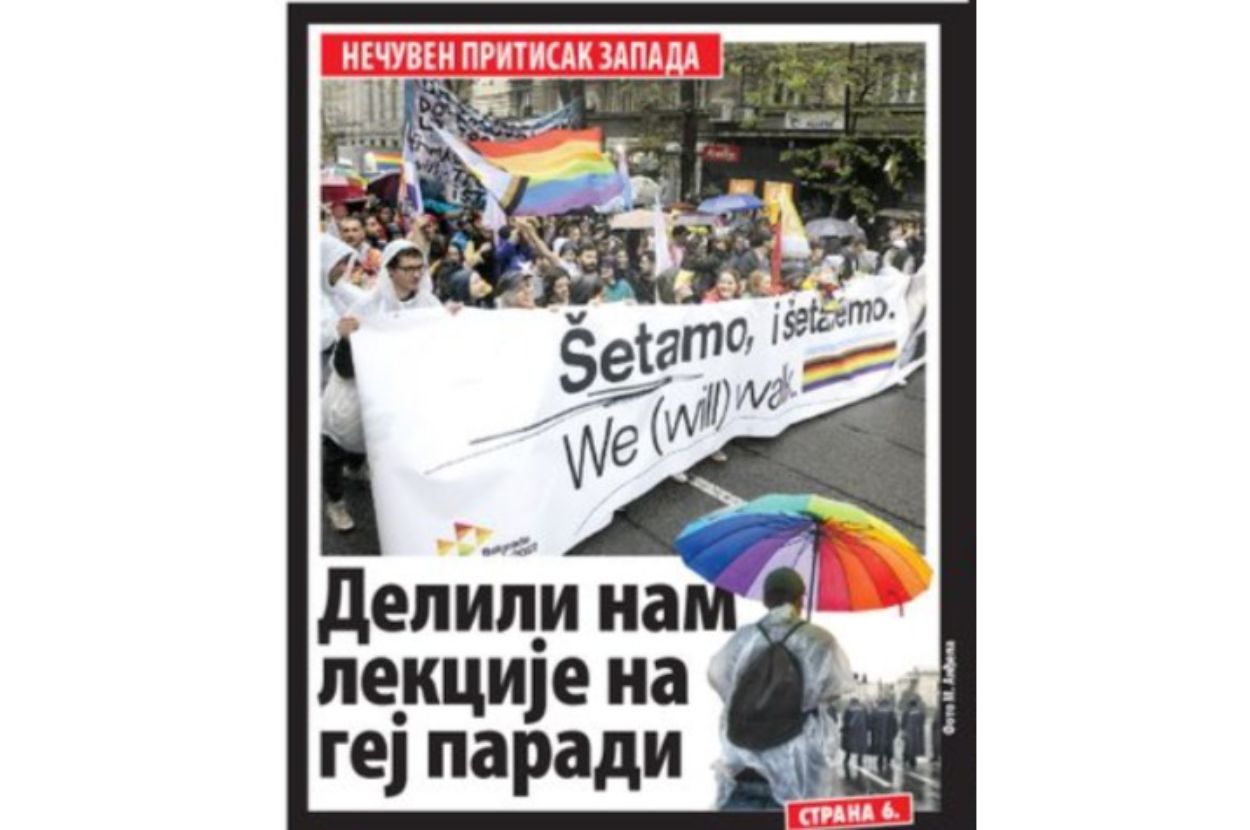 Srpski Telegraf also wrote about the pressures, but in their text the pressures come from both the West and the East. From the West, 26 ambassadors “descended” on Vučić insisting that the Parade must take place, while from the East – the Russians are using hooligans in an attempt to destabilize the country. Terrible pressure, the title read. 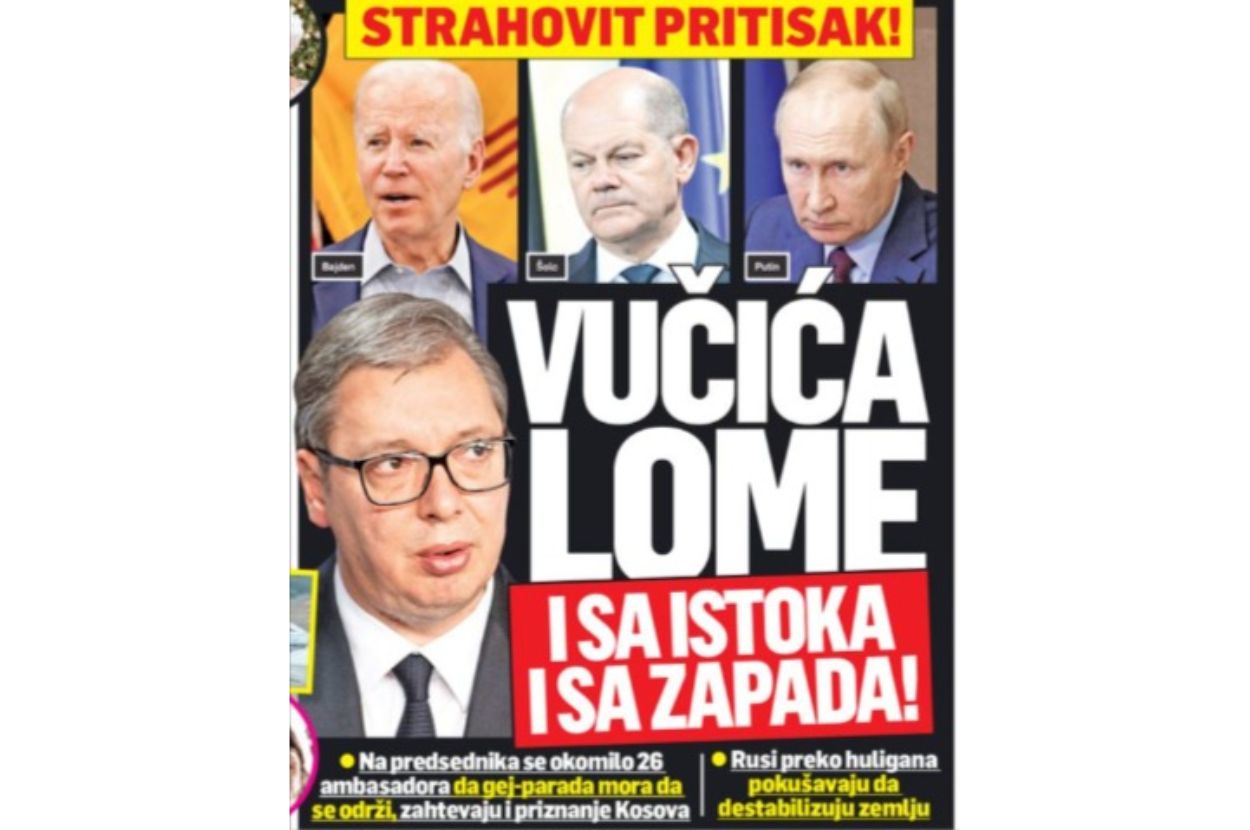 The media’s conclusions after the end of the march also depend on editorial policy. For Danas, the Government raised tensions in Serbia, but prevented violence, while for Kurir it showed strength. Večernje Novosti discussed the cost of securing the Parade, but kept silent about the reasons for the large police presence in the first place.

In recent weeks, the media has kept attempting to pit pressure from the West and its imposition of non-traditional values against the fraternal relationship with Russia and Serbia’s shared family values with it.