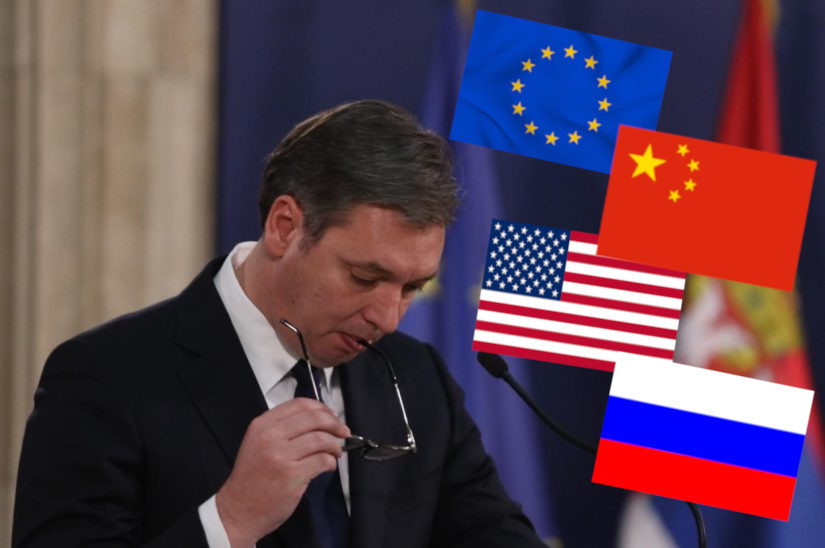 Other than fighting for human health, the global crisis caused by the coronavirus brought about a different foreign policy narrative in Serbia, designed primarily by the one who had been mostly creating it – Aleksandar Vucic, the President of the state. In the last couple of days, we could have heard cold, cynical or critical messages towards the European Union. However, we also witnessed the gushing of love, gratitude and respect for China. Playing the “China card” was immediately mimicked by other officials, who usually do that. They were followed by the regime media, and its seems Serbian Broadcasting Company, the public broadcasting service, was also keeping up. Russia and USA, otherwise important players in the region, from the beginning of this health crisis seemed to be not so interesting topic for the national officials.

Istinomer talked about Serbia’s relationship with these four global powers in the last years with Milan Krstic, a founder of the Centre for Social Dialogue and Regional Initiatives and a teaching assistant at the International Studies Department of the Faculty of Political Sciences and Igor Novakovic, the director of research in the International and Security Affairs Centre– ISAC Fund.

Relationship between Serbia and China apparently “flourished” in the last couple of years, with the increase of investments. In this case – prior to having the economic and security basis we had the political dimension and elites, said Krstic, so the space for deeper cooperation was being created from the top. In the words of Igor Novakovic, China was trying to get out from “semi-isolation”. He explained that selling drones to Serbia had huge symbolic importance since that was the first time a European country purchased Chinese weapons.

As regards the EU, Serbia is closely related to it since it is officially on the path of accession, being also economically linked, since, as our interviewees stated, over two thirds of Serbian foreign trade was with the EU. Moreover, the principal support of the EU remained the same and that is perceived as a strategic reality. As mentioned – no matter how much it seemed that the alternatives were being explored in the public, Serbia was connected with the EU, since we are surrounded with it and linked with it, the most as for the economy.

Primarily, the political reasons lie in the core of intimacy between Russia and Serbia. First, in the matter of Kosovo, Russia has a right of veto in the United Nations Security Council, and then Russia is an actor with prominent status in Serbian public and its support could be relevant for internal politics. Istinomer interviewees mentioned that Russia did not perceive the Western Balkans as its strategic area but more as a zone to rather destabilise the West intentions.

In the last years there has been a turn in relationship between Serbia and USA. Istinomer interviewees explained that one may gain an impression that the USA was somewhat changing the approach in relation to Kosovo. It seemed that America was now ready to accept some other scenarios as well, in their words, such as division of Kosovo, exchange of territory or similar.

What are the messages of the highest state officials?

Having in mind the 2019 overview, the current manner of reporting on foreign countries and their relationship with Serbia is not surprising, especially in the context of the coronavirus crisis. Tabloid headlines on brotherly relationship had somewhat blurred the real numbers and strategic orientations.

The latest issue of the weekly “Novi magazin” included the analysis of the donations to Serbia in the recent past.

The European Union is definitely the biggest donor to Serbia, and from 2000 to 2015 it contributed with more than EUR three billion in grants. From the article of this weekly – China is at 15th position with USD 9.5 million in donations, and Russia was not even among first fifteen.

“Therefore the Chinese promotion was really a surprise, since in the relevant period it was only 15th with EUR 9.5 million in grants. Please let’s not forget that Russia is not even among the first 15 donors to Serbia. We can alone make conclusions on the strategic importance of one country such as Serbia. However, we can also make conclusions on political intrigues in the internal political scene and conforming the truth to the political ratings”, as stated in this weekly, also that “it was politically legitimate to have a different political opinion, but entering the pre-election campaign with the strategic goal such as European integration, and obstructing the proclaimed ideas afterwards, in simple words, represents, sheer hypocrisy and misleading of the voters”.

Concerning the foreign relations of Serbia, President Aleksandar Vucic is the most quoted Serbian official. He was quoted more than Minister of Foreign Affairs Ivica Dacic and Prime Minister Ana Brnabic.

According to CRTA information and the media monitoring carried out in 2019, with analysis of more than 16,000 articles, President Vucic was not quoted in articles on Russia and China which had a negative tone. Majority of his statements refer to the EU, and these are neutral. Pro-Russian messages then follow, and the third position is occupied by quotes referring to the USA. It is a very complex balancing spectre, as seen from Istinomer analysis and the interviews with Milan Krstic and Igor Novakovic. This spectre is characterised precisely by President Vucic and his statements on love, brotherhood and cordial invitations and welcome notes.

This article was written within the Project “Strengthening Independent Media in Europe and Eurasia”.