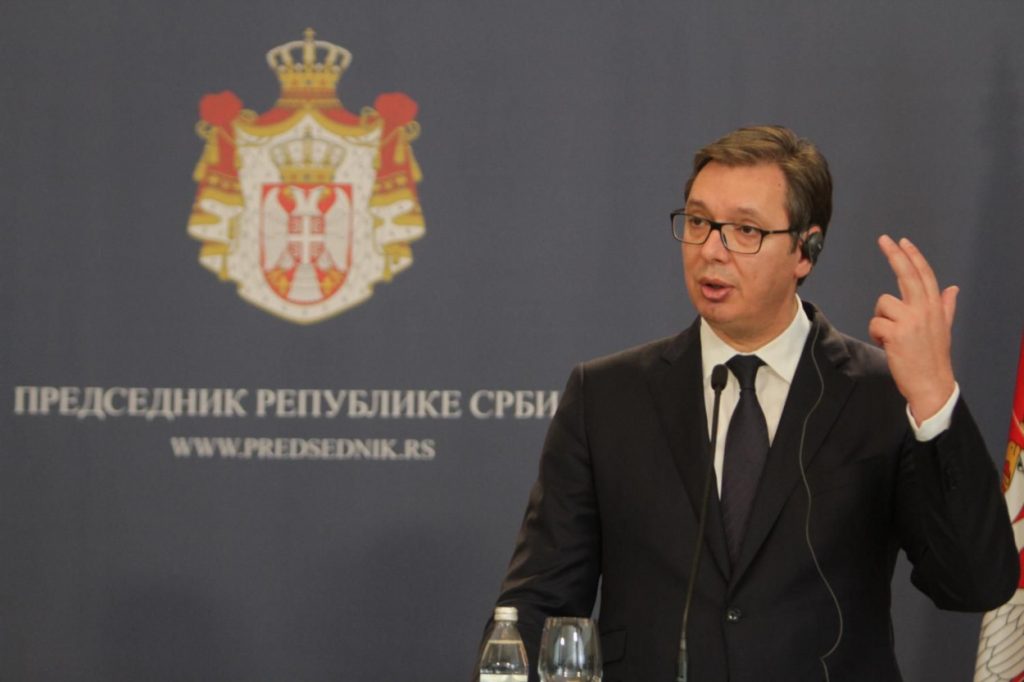 Calmest, cleanest and the best campaign so far

“I would like to congratulate the others on a fair and honest campaign. I believe this was the calmest, cleanest and the best campaign so far. Since ever.”

During his first public statement after Election Day, Aleksandar Vucic congratulated everyone on a fair and honest campaign. Before the celebration in SNS headquarters, the President of Serbia rejoiced for the “historical support”, as he said, based on daily surveys – they could have witnessed who is who.

“I was telling you through the campaign, they did not believe me. I guess they thought I do not tell the truth. We had daily surveys. We could have witnessed that those with better ratings before the elections, as long as their public appearance grew, their ratings were dropping. As for us, since we ignored them, did not even mention them, and as we spoke more about our ideas, plans and programmes, people wanted more of such politics, such people”, said Vucic.

Then he said what he thought.
“I believe this was the calmest, cleanest and the best campaign so far. Since ever”, said Vucic.

We would like to remind that turnout on the parliamentary elections was close to 49%, and based on CRTA observation mission data, the turnout would have been several per cents lower, if we would take into consideration all detected irregularities. A set of deficiencies was detected during the election campaign for “the worst elections since 2016”, so this is far from, in President’s words, fair and honest campaign.

The 2020 Elections Campaign – Abuses and Spinning

CRTA observation mission assessed that these parliamentary elections were the worst ever since CRTA observed the election processes and compared to 2016 both as regards Election Day and the pre-election campaign period. What matters is how the voters’ will had been formed.

After Election Day, the head of the mission, Rasa Nedeljkov, stated that, among other, the election campaign was highlighted by many changes of the key rules of the game during the election process, inequality between the election participants, intensive officials campaigning at all levels, abuse of public resources, as well as lethargy of the institutions which are obliged to protect the integrity of the elections process.

“The minimum of democratic standards has been met, but democracy is at risk because of all the irregularities, and it will be worse for any next elections. At this moment we should go back to the recommendations from the domestic and foreign observers, and we would like to remind that CRTA organisation has published over 60 recommendations for improving the election process”, said Nedeljkov.

Repeating old, but malfunctioning patterns, as well as active campaign before the elections were even scheduled, was followed by the “grand finale” in the final weeks when the boundary between the state and the party was completely blurred.

As Istinomer already wrote, three final weeks of the pre-election campaign were highlighted by additional relativization of the division between the government and the party affairs and interests, and higher suspicion of the abuse of public resources. This could be found in the results of the preliminary conclusions of CRTA observation mission for the period from 24 May to 14 June 2020.

Among other, in the referred period, CRTA observation mission has submitted 15 complaints against the public officials and parties for the abuse of public resources to the Anti-Corruption Agency, and in two cases the Agency established the violation of the law. In this period, activities of public officials tripled compared to the campaign in the first two weeks after the termination of the state of emergency and were five times higher than in the period before the election activities had been stopped.

In this period, CRTA observation mission submitted five complaints to the Republic Authority for Electronic Media, but this authority has not initiated any proceedings on these complaints.
Engagement of political actors in various community actions had intensified. CRTA observers took note of more than 100 activities such as landscaping, adapting children playgrounds, local communities’ offices and cultural institutions, filling roads and other.

It was especially worrying that there might have been an abuse of personal data of beneficiaries of retirement, disability and family pensions, which include children. SNS had sent them letters with party symbols to their home addresses, with the slogan “For Our Children” and signature of the President of the Republic of Serbia.

So, considering all abuses that had been identified during the campaign – from inequality of election participants to intense officials’ campaigning at all levels, for his statement about fair and honest campaign, Aleksandar Vucic gets the rating – false.