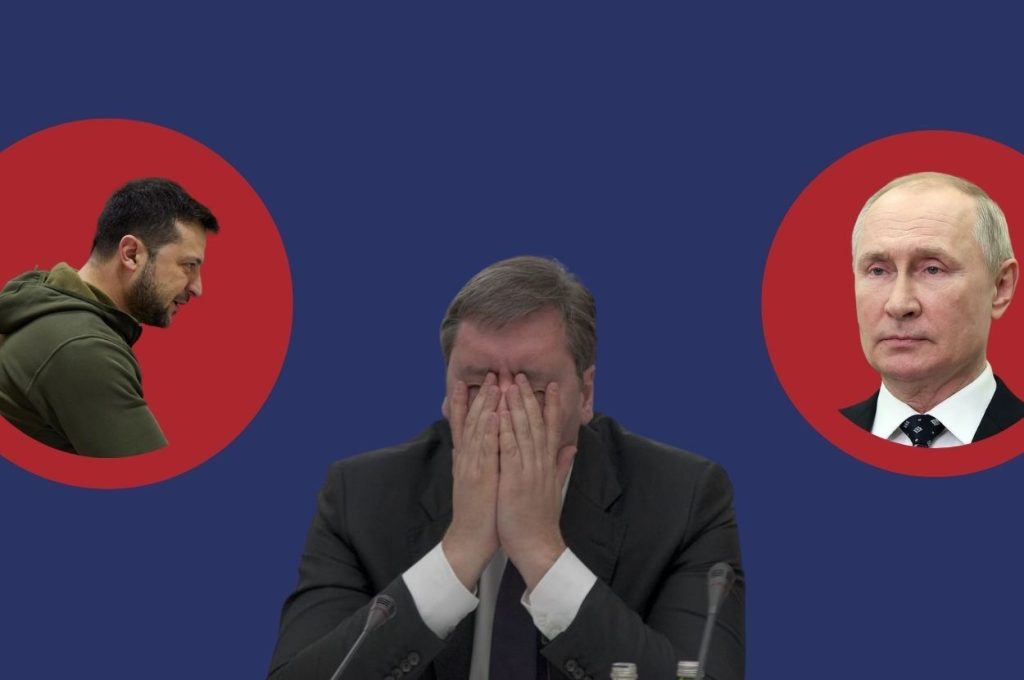 How did Serbia become the biggest victim of the war in Ukraine?

Russia’s aggression against Ukraine began on February 24th last year. Since that moment, one country has been a “victim of great powers”. That country has been “pressured”, “blackmailed”, “overkilled”, targeted in “orchestrated attacks”. War is waged in that country, but a special one. And that country is – Serbia.

From the first hours of the war in Ukraine until today, the media in Serbia went through different stages – from the fact that “Ukraine attacked Russia”, all the way through calling it a “special operation” and not a war, to accepting the reality, but with cheering for Vladimir Putin’s regime and his actions on the front.

The nuances of the approach to this conflict were somewhat changing until the moment when it became clear that it would not end quickly and that the consequences would be felt in the rest of the world. At that moment, for the national media, Serbia became the biggest victim of this war.

The answer to the question who were (yet again) the sources of all the problems that befell us is quite simple. The United States of America and the European Union, according to the Serbian media reports, starred in a new season of “chasing Serbia”.

We are having the hardest time

In the first week of the war already, the media pointed to the “horrible pressure on Serbia” to impose sanctions on Russia. “Notorious haters”, “political analysts of the so-called deep state of the European Union, but also of America” were listed by name. The details of the “brutal ranting of the West over Serbia” were published in a series of articles, and in some of them it was particularly emphasised that the President of the country, Aleksandar Vučić, “is successfully dealing with the challenges that surround him from all sides“.

To avoid the risk of falling behind the world, a special war began very quickly in Serbia as well. At least that is what the media called  fake bomb threats sent to primary and secondary schools, newsrooms, and state institutions. The goal of that special war was to “paralyse Serbia“ and to “force it into imposing sanctions on Russia”.

Special or not, it was more than obvious to the media in Serbia that “the war of great powers is waged at our expense”.

Therefore, while the fighting was going on in Ukraine, we were going through “hell” because, according to the media, “Putin’s decision to enter a ‘real war’ made Serbia’s position even more difficult”. In those days, “artillery preparation for a total attack” on Serbia began, since the pressures were “the greatest since the NATO bombing in 1999”.

That “pressures on Serbia started to take enormous proportions” after almost eight months of war in Ukraine was also the conclusion of television shows. The West then switched to “military methods” in order to “tighten the noose around our country” as the media defined the “incidents with unmanned aerial vehicles” spotted over Merdare and in the Raška area.

As for the most influential national media, all “strikes on Serbia” had two goals – the introduction of sanctions against Russia and the simultaneous recognition of Kosovo’s independence. A sign of hostility was placed in front of almost all the actions of Brussels and Washington, and their officials explained their expectations both through analysing Serbia’s foreign policy course and during visits to Belgrade.

Even if at moments if seemed that “pressures”, as the Serbian media call them, were coming from the East too, the relationship with Vladimir Putin’s regime remained the same. The friendly narrative fell silent for a short time when the President of Russia drew a parallel between Kosovo and the self-proclaimed republics in the Donetsk and Luhansk regions.

“Putin, whom we consider a great friend, showed his true face and harmed Serbia’s interests regarding Kosovo with his statement,”, the media wrote, stating that the Russian president “stabbed Serbia in the back”.

The statements of the Russian ambassador in Belgrade, Alexander Botsan-Kharchenko, have never been characterised as threats, even when the Russian diplomat said that the introduction of sanctions “could harm the economy and social sphere of Serbia”.

“Serbia’s economy is very connected, in the positive sense, with Russia. Everyone understands that anti-Russia sanctions would result in considerable damage to the economy and society,” said Botsan-Kharchenko in an interview with the daily Izvestia, and national portals conveyed.

The detector for “threats to Serbia” media close to the authorities did not recognise this statement as relevant.

On the other hand, pro-Russian sentiments remain noticeable even in silence. As a matter of fact, when the West expects something, it “breaks the back” of Serbia. When Russia expects something, the leadership of Serbia acts as expected, and the majority of the media completely ignores the situation.

This was also the case with Serbia’s participation in the First Parliamentary Summit of the International Crimea Platform. During the meeting with the Speaker of the Serbian Parliament, Vladimir Orlić, Botsan-Kharchenko “expressed the expectation that the delegation of the National Assembly of the Republic of Serbia will not participate in the Summit”.

Unlike other expectations, the Russian ones were fully met as the Serbian delegation did not participate in the Summit from which messages of support for Ukraine were sent, despite the official invitation.

The details of the conversation between Orlić and Botsan-Karchenko were later published in a parliamentary note, and then on N1 portal. The biggest media defenders of “Serbia’s independent foreign policy” and “Serbian interests” had better things to do at the time.

Thus, the war in Ukraine has only denuded the way of reporting peculiar to the Serbian mainstream media. In fact, according to the CRTA’s media monitoring data, the anti-Western narrative that dominated in the previous five years has further intensified since the beginning of the war in Ukraine. The ratio of positive to negative media reports about the European Union and the USA in 2022 is one to fifteen, while this ratio is the opposite when it comes to Russia, where the ratio of positive to negative reports is two to one.

All things considered, for the most popular media in Serbia, the war in Ukraine was just another reason to put Serbia in the role of victim. And this topic was used for panic and fear mongering, as well as for the already established practice of antagonising the West, particularly the European Union.